First there was the south endzone renovation, complete with locker rooms and coaches offices and a new tunnel for the team to enter from the south. Then we heard that everything was shifting to the northeast. And today we got some drawings.

I think I might get some architecture friends to help discuss the overall plan (phase II will be renovating the horseshoe), but for now, some thoughts on the new "Illini Football Performance Center", which will be ready before the 2019 season begins.

1. I still prefer the south endzone

As mentioned in previous posts, I was a huge, huge fan of the south endzone project as detailed in the Mike Thomas feasibility study. The massive locker room right next to the field, the coaches offices at the top overlooking the stadium below (with terraces to sit and chat with a recruit overlooking his future field of glory) - I loved it.

So from the get-go, this thing is going to be a disappointment to me. Getting something new - ANYTHING new - is great. And sorely needed. But I'll probably forever have my hand on the back bus window as I drive away from the south endzone drawings, never to see them again. The plan was perfect (in my eyes).

I just looked for a clip and couldn't find it, but I recall a press conference where Lovie mentioned that he preferred to have everything "all in one place". As in, if the locker room was under the horseshoe, that's a long way from the indoor practice facility. Yes, having the locker room next to the field is great for gameday, but for the other six days of the week, it would be difficult getting everyone dressed and taped up under the horseshoe and then having them walk to the Irwin indoor.

I think that's the genesis for this study (and the revised, phased plan of doing all of the football facilities in a stand-alone building and then doing the stadium renovations as stadium renovations. I disagree with Lovie here, and I think his office overlooking the field >>>>> his office overlooking the practice fields, but he's the coach and I'm the blogger so what I say doesn't matter an ounce.

3. That's a long way from the field

It's halftime. We have to do that pause while Minnesota crosses the field to the northwest corner to head to the visitor's locker room. Then we head across to the tunnel. The team walks up the tunnel, turns left down the hall, climbs an ancient staircase to the second level, comes out of the staircase and does a 180 degree turn to the left down a long hallway. Then they go through the doors outside, walk past the fans on the east sidewalk and into the new building. They enter the building, go down the hall, turn right, and presto, they're in the locker room. Oops, the clock reads 5:00, time to head back to the field.

OK not really. It's not THAT long. But I'm still a bit taken aback that our locker room will be in a different building, not connected to the stadium, across a public sidewalk, a level or two above the field. Yes, I've seen the videos of Notre Dame players walking a mile down ancient stairways - it's not that big of a deal - but it still feels odd to me.

4. Things I love about it

Here's a few images, and then I'll make a list. 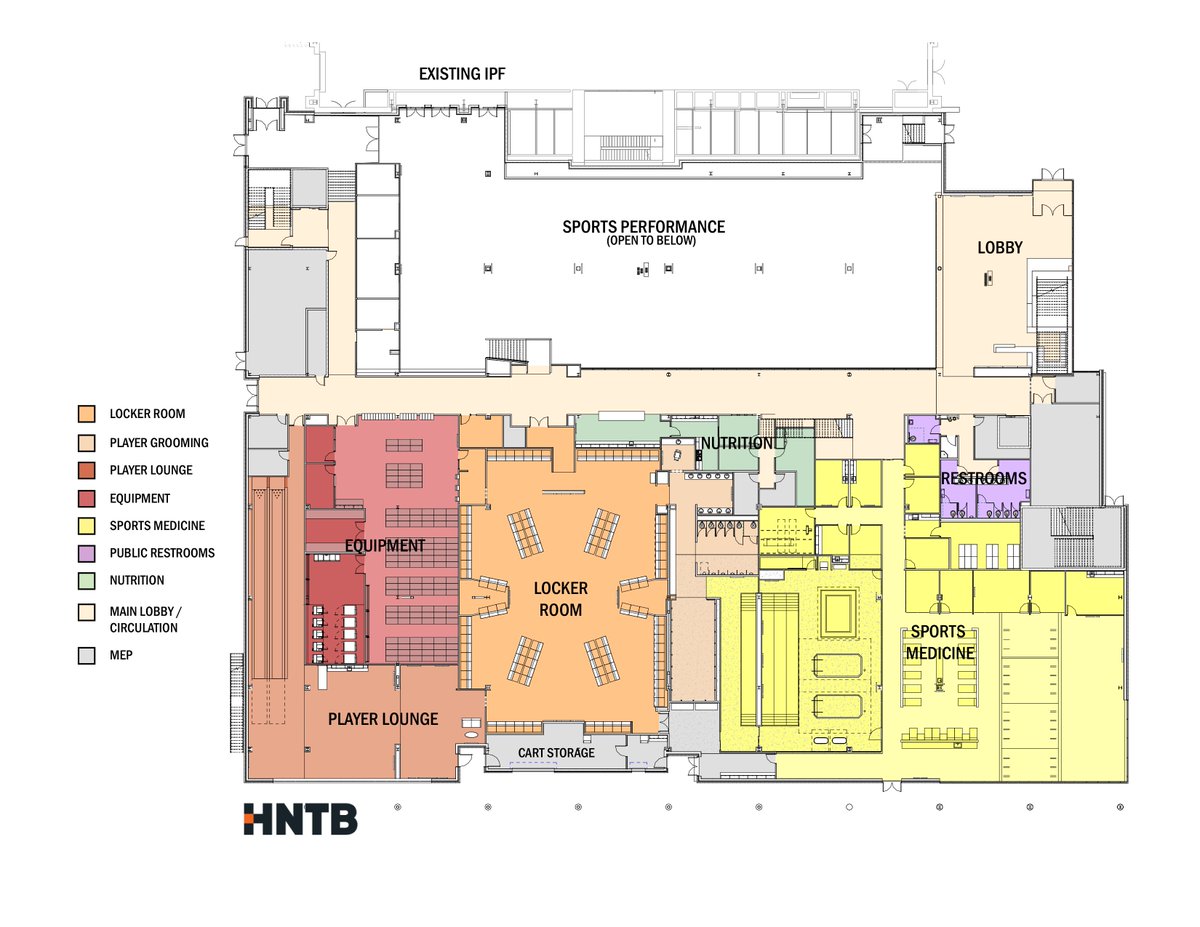 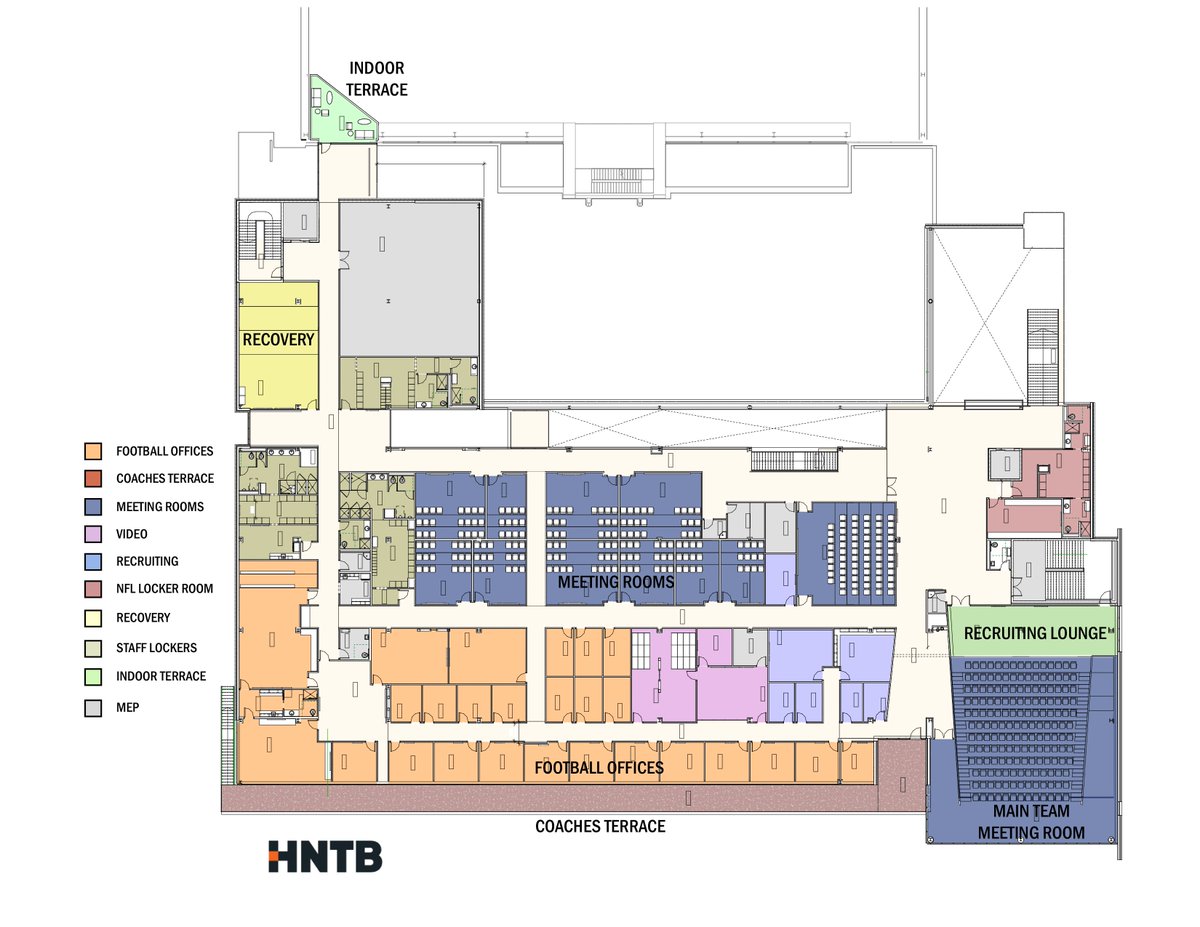 Where I land: we desperately need new stuff. The stadium was expanded for the fans in 2008, and there was a nice recruiting lounge built underneath the new north stands, but the team has continued to use the outdated (by decades) locker room and meeting rooms. So adding anything is a huge improvement. We really, really need this stuff. One walk through the current facility and many of you would laugh out loud. We really, really need this.

I just wish it was all going under the south endzone.

Only reason I preferred SEZ is because I wanted to have my cake and eat it too - horse shoe done for fans at same time, as we currently have two awful end zones. Outside of the coaching offices being at the top, I don't see many advantages of the SEZ plan. Way, way more space here. We're not cramming this in. Everything is connected. So it's a long walk at halftime. Better 6-7 times than 150 times. That's about the only disadvantage.

Anyway, get more renderings, get them into an awesome pamphlet, and have them ready for recruits. Seeing is believing, and we have to do our best to have them see this, not just the bird's eye view. We're losing some recruiting battles due to the woeful facilities, so thankfully that won't be a factor much longer.

Bowling alley? I was hoping for miniature golf.

Seriously, couldn't that space and money be spent better? Is that what these guys are going to do in their spare time? I mean, what spare time? I didn't have all that much as a student--and not an athlete--and if there was something I wanted to do, it certainly wouldn't be bowling with a bunch of other guys.

My hope is that the bowling alley is meant to be something that will easily be deleted as "a compromise."

Seriously, a bowling alley? That's not the kind of bowl we want these guys to be going to.

These are athletes. Yes, they relax by bowling. Or playing ping pong, or... And yes, we want them relaxing in the football center and not at the bars.

To the topic, lovie and Whitman toured a bunch of different facilities and determined this was the best set up so I'm inclined to believe that. Can't wait to see drawings/pics of what the actual rooms themselves will look like.

I'm sort of the inverse of Robert in that I never quite understood the south end zone plan. They are going to walk to the other end to use the weight room? Outside, down the field, around the corner to get to the indoor facility? Eat/dress in one place, practice in another, lift in a third?

So I LOVE these plans. But a couple of questions:

To sort of answer my own question, it would seem they will continue to use the varsity room in Memorial Stadium.

So are they just leaving the NE corner of the stadium and the current locker room alone? No renovation there at all?

Ever since we redid the North End Zone it seems like that corner is severely neglected, especially with that nice little patio there overlooking the field. I was sort of hoping that might be the spot for Lovie's new office, with rebuilt locker rooms and everything underneath - along with the new building by the practice fields.

Your description of the halftime walk sounds "not ideal". Would love to see a video of how far the players actually would have to walk.

Overall, I gotta say these are pretty impressive plans. My only real complaint (and its admittedly minor) is that I wish the new building was entirely north of the collanades so you could still see the entire length of the stadium from 4th street. Completely aesthetics and it shouldn't take priority over the function, but I wonder if they couldn't have designed it just slightly differently (or moved the parking spots) to preserve that impressive sight.

I'd guess the existing office space and locker/training areas in the NE tower area will be repurposed.