Do we bowl last season if Donny Navarro decides to just stay at Valparaiso and be this really great FCS wide receiver? I took a trip to the Bay Area pretty much because Donny decided to give Power Five football a shot, right? I think so. Just look at some of the big games.

The squeeze-between-two-DB's touchdown against Wisconsin? Sparked the whole thing, right?

The how-did-he-catch-that grab around the DB's arm against Rutgers kick-started a sleepy team on a sleepy Saturday.

The seven receptions at Michigan State? I KNOW we don't win without those.

Thanks for transferring, Donny. Even though we lost, I really enjoyed going out to the Redbox Bowl.

You probably know most of this. Once we get to the starters you know the backstories.

For Donny, it's this: went to Dude K's high school (Neuqua Valley). Got a scholarship to Valpo. Was one of the top freshmen receivers in the FCS. Decided "I'm pretty good at this game", did that thing the kids like to call "bet on himself", and left the scholarship at Valpo to walk on at Illinois. Sat out the 2018 season, showed up in my 10 Names You'll Learn column on New Years Day in 2019, and then 27 catches during the 2019 season.

Maybe I should just link the text from that 10 Names column as more background. Of course, it's basically the same thing I just typed out:

Five years ago today, I first brought up the name Clayton Fejedelem. Fej went on to become FEJ! and then was drafted by the Bengals. Now, another "he transferred in from a small school and just remember his name because I think he can eventually play at this level" player: Donny Navarro.

Navarro, from Dude K's high school (Neuqua Valley), went to Valparaiso out of high school. In one year there, he was their leader in receptions, reception yards, touchdown catches, and every other receiving category, so he had a Fej moment - he could stay at Valpo, or he could walk on at Illinois and see if he could play at the highest level. He decided to transfer (and, like Fej, had to sit out a year even though he was walking on).

Now, on a team that needs receiving help, Navarro is an option. It's a long, long road from Valpo to the Big Ten, but... just keep Navarro's name in the back of your mind.

He's a junior, so with the Covid rule, technically, he could play three more seasons (this one and two more). That would be some nice stability in the passing game. He showed a knack last season for finding the sit-down spots in zones, so maybe he can be that guy for four full seasons.

He also showed a knack for making crazy catches. Here's a photo of that catch from the Rutgers game: 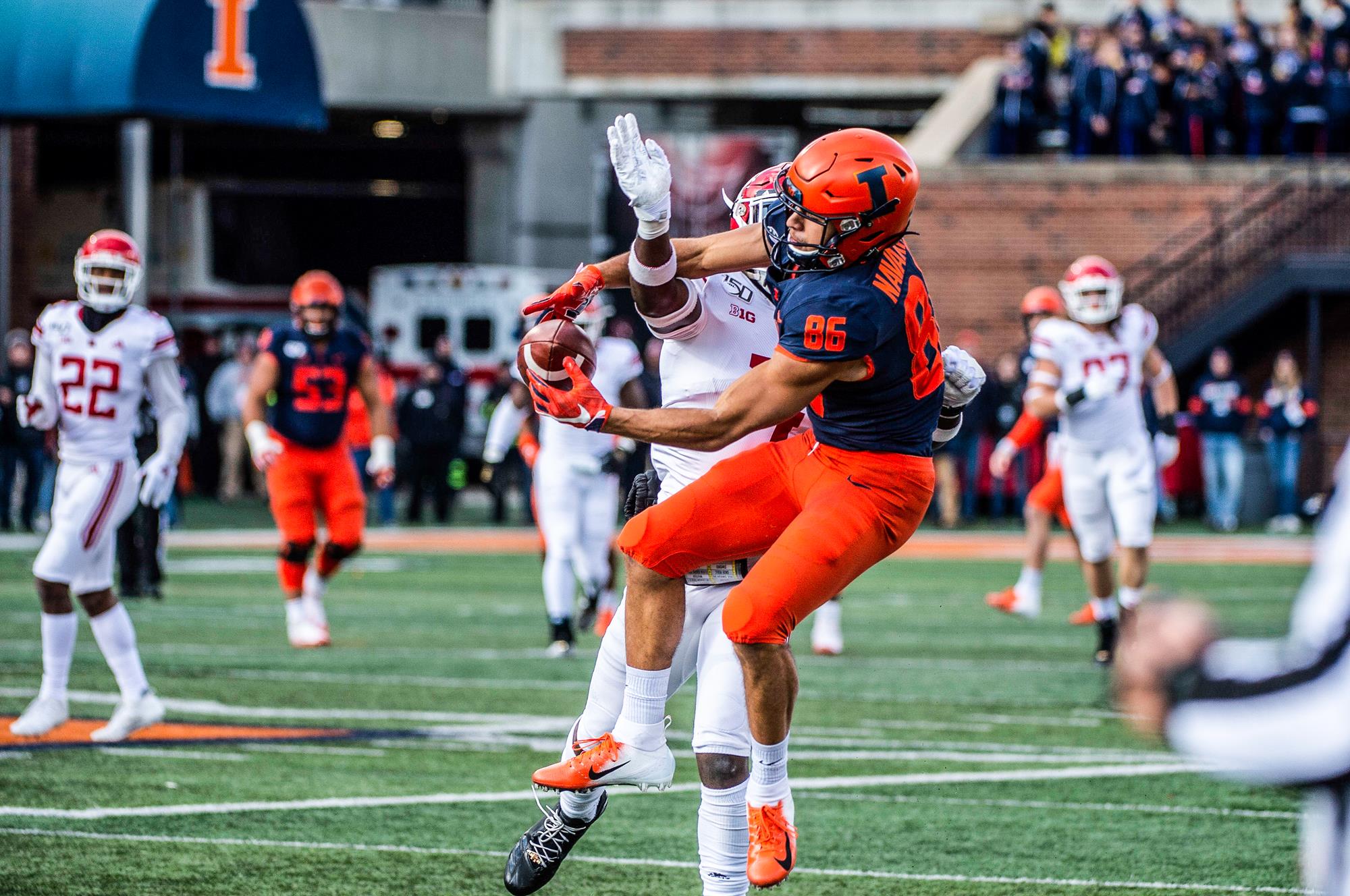 So for Navarro, more of that, please. Hands and zone sit-downs. Be the "man, just throw it to Navarro - he'll catch it" guy for the next two, hopefully three seasons.

Those gifs and that photo...let's FOOTBALL!!!!