Calm down. Take a deep breath. Let's talk this out.

First off, we'll get The Roommates back tomorrow. Brandon Peters' roommates and Griffin Moore's roommates. They all had to miss the last two games due to contact tracing. Peters and Moore are still out - the Big Ten's rule about myocarditis screening means that anyone testing positive is out for 21 days - but contact tracing is only 14 days. So that meant The Roommates could return to practice Wednesday.

That means we get QB Isaiah Williams, LB Shammond Cooper, DE Keith Randolph, C Doug Kramer, and K James McCourt back for this game. That's a positive. If nothing else, tomorrow is the "OK Isaiah Williams, let's see what you can do" game.

But I also feel fairly good about this game just based on Rutgers' season. It just feels like they have an "oh, right, this is going to be difficult" moment coming. They did win their first game over Michigan State, but Michigan State turned the ball over seven times. They then lost to Indiana and Ohio State (but they looked pretty good in the second half against Ohio State). They're certainly improved, and they're seeing a transfer bounce like we saw a transfer bounce last season. Still... feels like they're going to have some yakkity sax moments. And since they haven't had that game yet, it might be tomorrow, right?

Let's just look at some stats. These come from TeamRankings.com, and they do all of their stats on a per game basis. Rutgers first, then Illinois, then we'll talk about it. 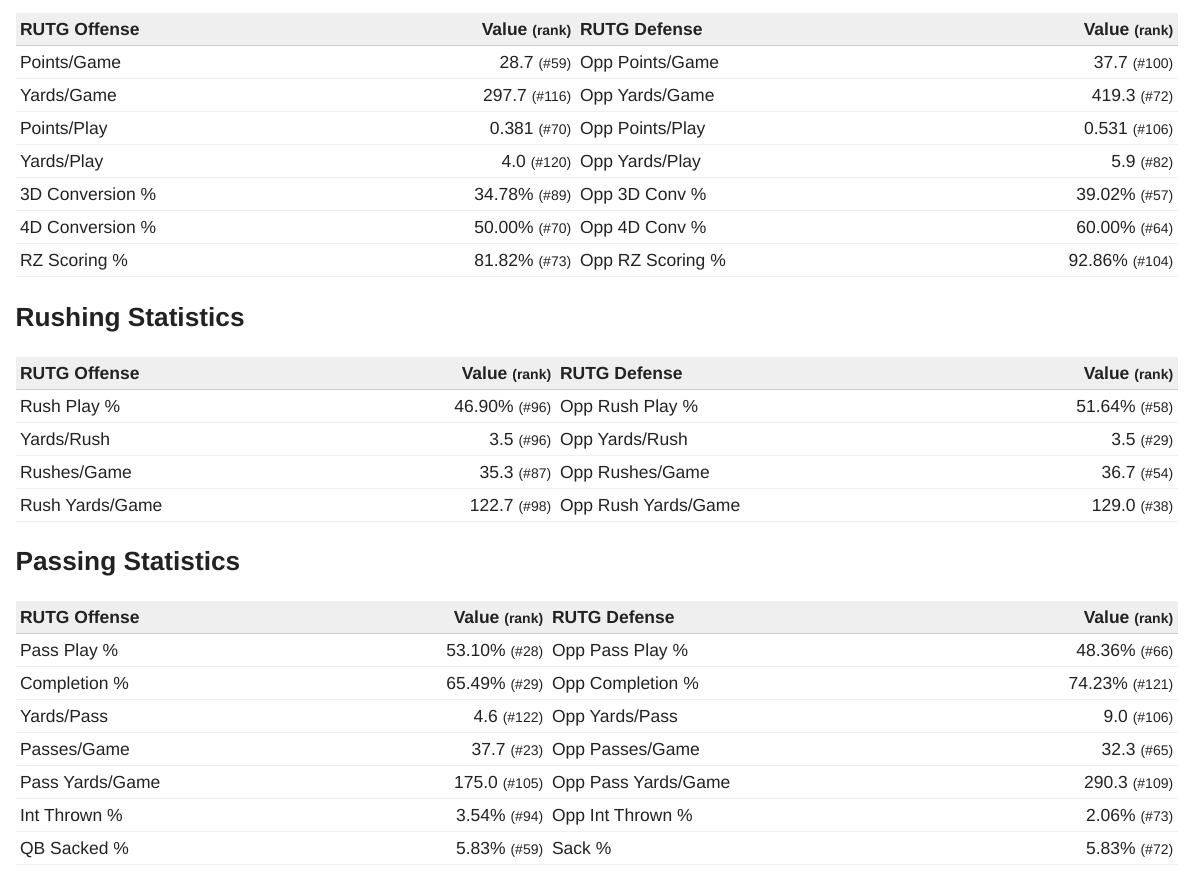 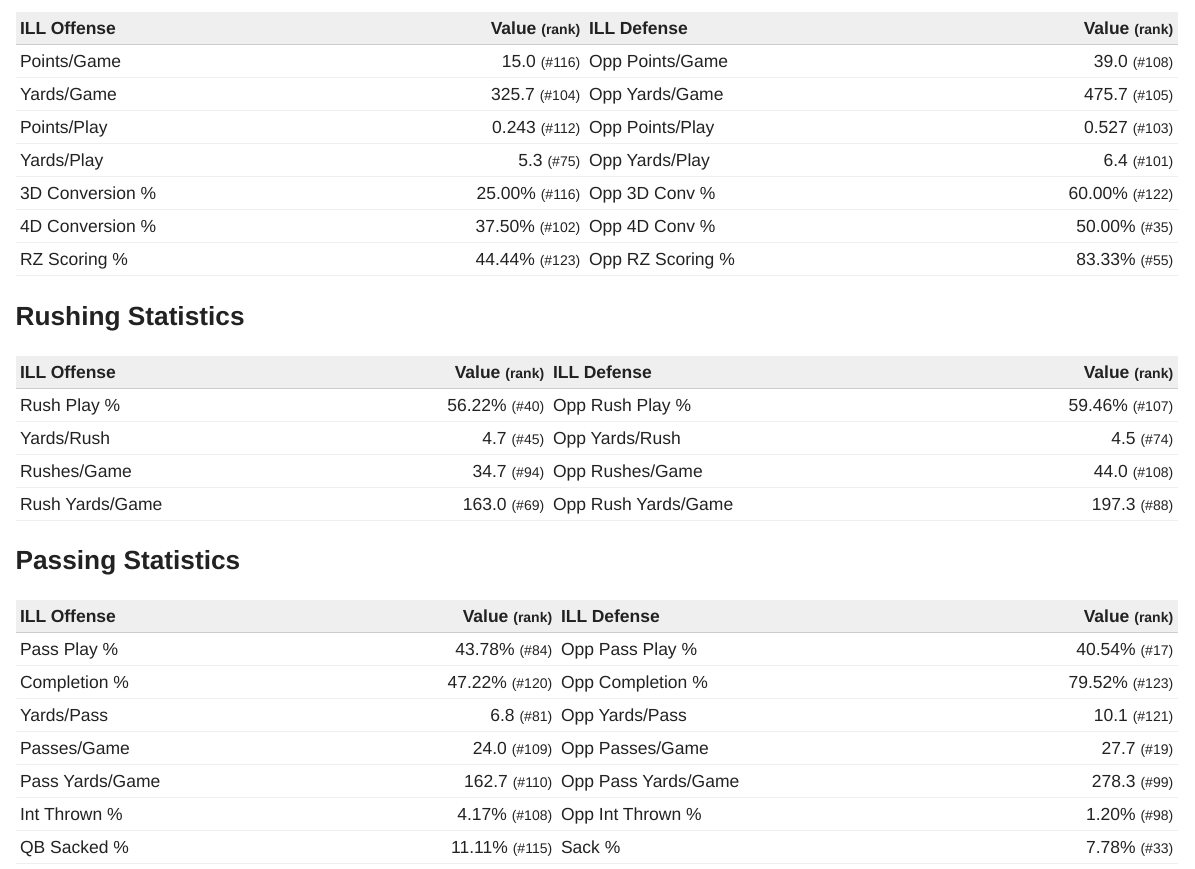 Here's what jumps out at me:

I get the emotional side of everything here - believe me, I do. We suck, the players have obviously quit, season is over - all of that. Maybe I should just stick to that when making these predictions and play it safe.

And I get how any "I think Illinois wins" will be treated when it's me. You'll think it's just the hope shining through once again, refusing to face reality. Beileve me, my brain goes into "you idiot, just play it safe and protect yourself from criticism" overdrive at times like this.

But there's just so much here that hits my trip wires - Rutgers has recovered 85.7% of their opponents fumbles so far this season, a number that will always work its way back towards 50% - that I can't help but think there are some corrections coming to "you know, Rutgers isn't half bad". Like, if they were playing Kansas this weekend, and Twitter was alive with "I just bet on Rutgers as a 19 point favorite what is life", I'd still be saying things like this even though Kansas was the opponent. This is based very little on our potential and very much on "Rutgers is going to lose a game 52-6 soon because these per-play stats (and the takeaway stats) aren't sustainable". Instead of Michigan State turning the ball over seven times, leaving Rutgers +4 in turnover margin, there will be a game where their opponent turns the ball over zero times, leaving Rutgers -3 in turnover margin.

Bold but hard to see from here unless Isaiah is a revelation at QB and the offensive line is much improved with the return of Kramer. Isaiah will have to prove he can throw. I am hopeful Rod will adapt to his skills in how he calls the game.

Not every team regresses throughout a season. Some teams improve the more they play with a scheme and a coach. Hope you're right, but I disagree with you on this one.

Clemson had that incredible 2018 season where they went undefeated and knocked off Alabama 44-16 in the title game yet even they had two "why isn't anything working?" games. The fact that they fell from #2 to #4 after the 27-23 scare against Syracuse drove me insane. College football is about surviving that inevitable game and yet the pollsters were all "hmmm.. maybe Clemson isn't all that good". They then won their next three 63-3, 41-7, and 59-10 - two road games and a home game against #17.

These are the two worst teams in the Big Ten, so in my mind, it's something like this: Illinois is going to have six "why isn't anything working?" games this season and Rutgers is going to have five. We've already played two of them, Rutgers hasn't really played one yet, so meep moop morp Illinois 30, Rutgers 20.

I understand what you are saying, but I also recall posts from the past about jelling and coming together under new regimes. Guess we will know in a few hours. Enjoy the game!

So 3 big ten teams are the worst in the country at stopping opponent passing attacks?

Anyone crazed enough to drive from C-U to Jersey in the middle of a pandemic deserves to be right - as I believe you are. Be safe and enjoy!

"Rutgers somehow gives up more passing yards than Illinois this year. So just think of our opponents throwing the ball all over us the last three weeks - Rutgers is somehow worse."

All a function of our porous run defense. RU stops the run a bit better than ILL. Opponents are running the ball 60 percent against us for almost 200 yds/game! RU only at 52 percent. If you look at yards/pass, RU gives up 9 and we give up 10.1! Man, the defense has been so bad...against very average teams.

So the thing we really, really struggle to stop (opponents getting chunk yards in the passing game), Rutgers struggles to do.

Do they struggle to do it because of their own offensive ineptitude or because of the defenses that they've played? Because if they have any offensive ability at all, it'll probably come out against our defense. We're the struggle-busters. :(