The last 21 days have been quite a journey. Maybe not as long as my drive back to Champaign tomorrow, but a JOURNEY. Pretty sure I worked through all five stages of grief in 15 days. Today felt a little different, and I'm going to try to explain why.

If you're not familiar with the five stages of grief, well, just look for the words in bold in this paragraph:

The Wisconsin game and its aftermath were definitely denial for me. "Maybe Wisconsin is playoff-good and we'll flip the switch next week against Purdue". I think I even pointed to the 1983 team losing badly to Missouri in the opener as an example of how it might all turn around. The first half against Purdue was definitely anger as I had just put together this long post (with gifs) showing how Purdue's walkon QB was gonna gift us with several INT's and then he's throwing dart after dart after dart and we're helpless to stop him. Choosing where I was bargaining is easy - charting the players out with Covid and figuring out how we'd look upon their return (like it would make a difference). I can tell you the moment for the deepest depression: my tweet where I talked about PJ Fleck running from one end to the other at the end of the third quarter yet I can't say a damn thing because he wins and I lose. And acceptance came this last week after getting everything out there in my 13 minute "if you ever wanted proof that you should never listen to me..." From The Stands recording after the Minnesota game.

In those three weeks, I feel like I worked my way through the grief that comes from five years of saying "hold on, the corner will be turned soon" and then watching the fifth year look like the first year. It's definitely a loss, and after you experience a loss, you're headed for grief. The last three weeks have not been pretty in my head.

This game, however, my head seemed different. Maybe it was the trip out here. Maybe it was the fact that we had a thing to be excited about (Isaiah Williams' first start). I still have a large penance to pay for asking you to be patient with Lovie, but after last week's acceptance moment, this was a rather enjoyable game (in that sense). Stress free compared to, say, the last four years. College football can be very enjoyable when "but what does it MEAN" is put to bed. I've accepted that it didn't happen and now I'm in this phase of figuring out what comes after that acceptance.

I have to tell you - it's fairly freeing. Maybe I wouldn't be saying this had Rutgers run the ball four more times and then kicked the game-winning field goal, but this is a much more enjoyable way to watch a game. WHAT DOES IT MEAN just ruins everything. Spreads like wildfire and requires acknowledgement in every tweet, text, or conversation. Getting back to just watching a game and evaluating what happened is surprisingly fun (who knew?).

I think it was the drive out here that finished clearing out my head. Last night's SOC felt like they felt years ago. I feel like I saw this game fairly clearly and was ready for the backlash of predicting a win. I kind of obsessed over keeping my head pure today too - hopped out of some group texts, muted some angst-ers who just @ me with the same rage twelve times every game, and tried to avoid nearly every internet hornet nest and just watch the game.

The goal line stand that was stuffed at the beginning of the second half was infuriating. Five tries from the one, all in the shotgun, and we couldn't gain a yard. The fifth play we finally score but two penalty flags take away the touchdown and we have to settle for a field goal. Rutgers then marches right down the field and on a busted play where our safeties collided and fell down, Rutgers takes a 10 point lead midway through the third and it feels like the game is over. But they wouldn't score again.

Illinois drives down to the one yard line again (and we're all thinking "here we go again") but this time we punch it in to make it 20-17. We force Rutgers into third-and-10 and a forced throw bounces off Derrick Smith and lands in Jake Hansen's hands. It wasn't that much help - if the ball doesn't bounce off Smith and falls incomplete they punt and we take over at maybe the 20 and not the 38 - but this is where the defense starting proving they could get off the field. We put together yet another big drive (the running game is really clicking at this point) but we stall at the five and have to settle for a field goal. 20-20.

Rutgers gets the ball back and the defense stops them again (a bad 3rd-and-11 throw was almost picked off) and they have to punt. Then, more chunk yardage on the ground but the drive stalls with 4th and 2 at the Rutgers 36. We, uh, kick the field goal? Okayyy. Wide right, still 2020.

Then another Rutgers "interception but it was basically a punt". Third down they throw a deep ball to Melton and Devon Witherspoon picks it off. Had he just batted it down, they would have punted and we would have gotten the ball at maybe the 20, so this was another "stopped them with an interception, but it was also a failed third-down play that would have led to another punt".

We get the ball back and there we go again, this time to the Rutgers 28. Three minutes left, turn to McCourt, and... he missed another one. So now the Rutgers offense heads back out there with good field position and the winning field goal in sight. They go run-run-run-run and in four plays go from their 28 to our 37. Pretty sure this game is over now. Three more of these runs and they'll be setting up for the winning chip shot as the clock expires.

Instead they... pass? And we pick it off. If you're keeping track, Rutgers three drives before that ended with an interception, a near-interception forcing fourth down and a punt, and an interception. With that as the trend and having just gone 35 yards in four plays on the ground, Rutgers chose to... pass. Intercepted.

This was probably the best part of the game. 1:17 remaining and we just need to get into field goal range. There were great moments (quick snap when Rutgers jumped offsides and Williams connects with Washington for 16 yards on a FREE PLAY), there were freshmen-gonna-freshmen moments (Williams bobbles and then fumbles forward but dives and grabs it just in time), and then there was a game-defining moment.

Well, first, some Illinois Football moments. First the coaching staff doesn't realize that the clock started after the fumble pile was sorted out and the players are standing there looking to the sideline for the play call while the seconds tick away. Then Williams keeps and runs out at the Rutgers 35 but there's a flag - holding on Illinois, so we're pushed back to the 45.

And then the game-defining moment: In all that chaos, Isaiah Williams' best throw all day - a perfect back-shoulder throw to Casey Washington who backpedals out of bounds at the 29 with seven seconds left, setting up the winning field goal. Lots of rough throws from the freshman all day (and who can blame him - it's his first start), but that one was pure. And he talked about it in the postgame, really focusing in on needing one throw to win the game.

In the end, 195 yards rushing, 104 yards passing, and a helmet sticker just now from Jesse Palmer on ESPN:

Isaiah earns a helmet sticker from Jesse Palmer. Love to see some buzz after his first career start pic.twitter.com/UalLUg3Res

What was this game LIKE? A lot of fun. Down 10 twice, fought back to win. My only real complaint is that the Rutgers lateral play at the very end didn't lead to an Illinois touchdown because my prediction was 30-20 and that would have hit it on the nose.

And it allows me to go into this week and pretend like we're a real football program. We get our senior starting quarterback back from missing three games due to Covid, and he shows up at practice to find... a 5-star freshman who just broke the school record for rushing yards. Maybe I'll pretend that it's 1990 and the call-in shows are on fire with "who do you start?" debates. Maybe I'm even wearing this rugby shirt when I call into SportsTalk to give my QB choice (a shirt which we all owned in 1990 - don't lie): 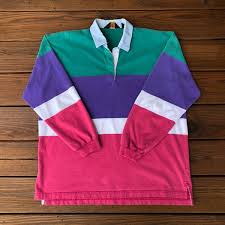 What comes after acceptance? Well, for me, it's a fun trip to Piscataway to watch my team win one with three seconds left. And that feels so refreshing compared to, oh, you know, the last 371 days without an Illini football win. Remember when I used to do "here's some good things" lists in postgame posts? Hey, let's do one of those again. I'm starting a stopwatch and will give myself seven minutes to compile as much as I can.

OK that was 7 minutes and 54 seconds but close enough.

I think that's all I have. I'm happy as I head to bed tonight. I was in denial, then I was angry, then I bargained, then I was depressed, then I accepted.

And then I drove to New Jersey and had some fun.

“Fun trip to Piscataway” is very 2020. I never owned a rugby shirt. I also love this post.

That's really great! (And I'm also really glad we won. I can never allow myself to watch a game rooting against our guys, just to justify the coach getting fired.)

But as you semi-suggest, it was like watching two FCS programs. It just didn't pass the "eye test." It's year 5 for Lovie, but can you imagine putting Illinois/Rutgers on ABC at 3:00pm for viewing by a national audience? Pretty darned ugly. I thought J. Leman was going to drop his microphone and quit after that opening Rutgers drive. He was so down and despondent. Next up = 15 pt. underdog to 1-2 Nebraska.

Awesome. Had the shirt

Here is the perfect book for you. I Feel Much Better Now That I've Given Up Hope. It's only $11 in paperback.