I think I promise to do things just to challenge my limits. Because I keep promising on the Slack channel that Check The Tape posts are coming but then I get bogged down with writing and podcasts and t-shirts and I can't find the time. But hey, right now I have two hours and 45 minutes before I'm leaving for Lincoln, and I already gif'd a few things earlier in the week, so let's max out this time I have with some CTT-ing.

I also have been working on better ways to check said tape. This was a staple of the old blog (I started doing them in 2011 I believe), but when I reached that "I can't do all of this and do my job and have a life" moment in 2016 I stopped doing them (same time I stopped podcasting). Now that I have time, I wanted to do less "here's six screencaps I made of that play" and more "here's the play in gif form with a few arrows on it". So that's what I'm attempting below. It will be a work in progress as I get used to this new software. I promise to have it figured out by 2023.

Re-watching the game, this is the first thing that jumps out. Rutgers is.. undisciplined (which is fine - first year coach).

This was the first big (for us) penalty Rutgers committed. We're backed up at our goal line after a great punt and they help us out. Kendrick Green absolutely destroys his guy - uses his wrestling background to basically roll the guy to his back for a pin - and the Rutgers guys' teammate didn't appreciate seeing his player get absolutely owned. Don't watch the ball - just watch Green after he takes his guy to the ground.

I love a penalty like that. You see your guy get pancaked and then more-or-less pinned so you cheap-shot after the play. It's that guy at the bar fight whose friend gets taken to the ground - he dances around in the background waiting for his opportunity and then tries to sucker punch the winner of the fight in the back of the head. (He almost always misses.)

I thought it was funny that Greg Schiano then yelled at the wrong guy. #50 got the penalty, but Schiano yanked the guy who got pancaked and yelled at him on the sideline: 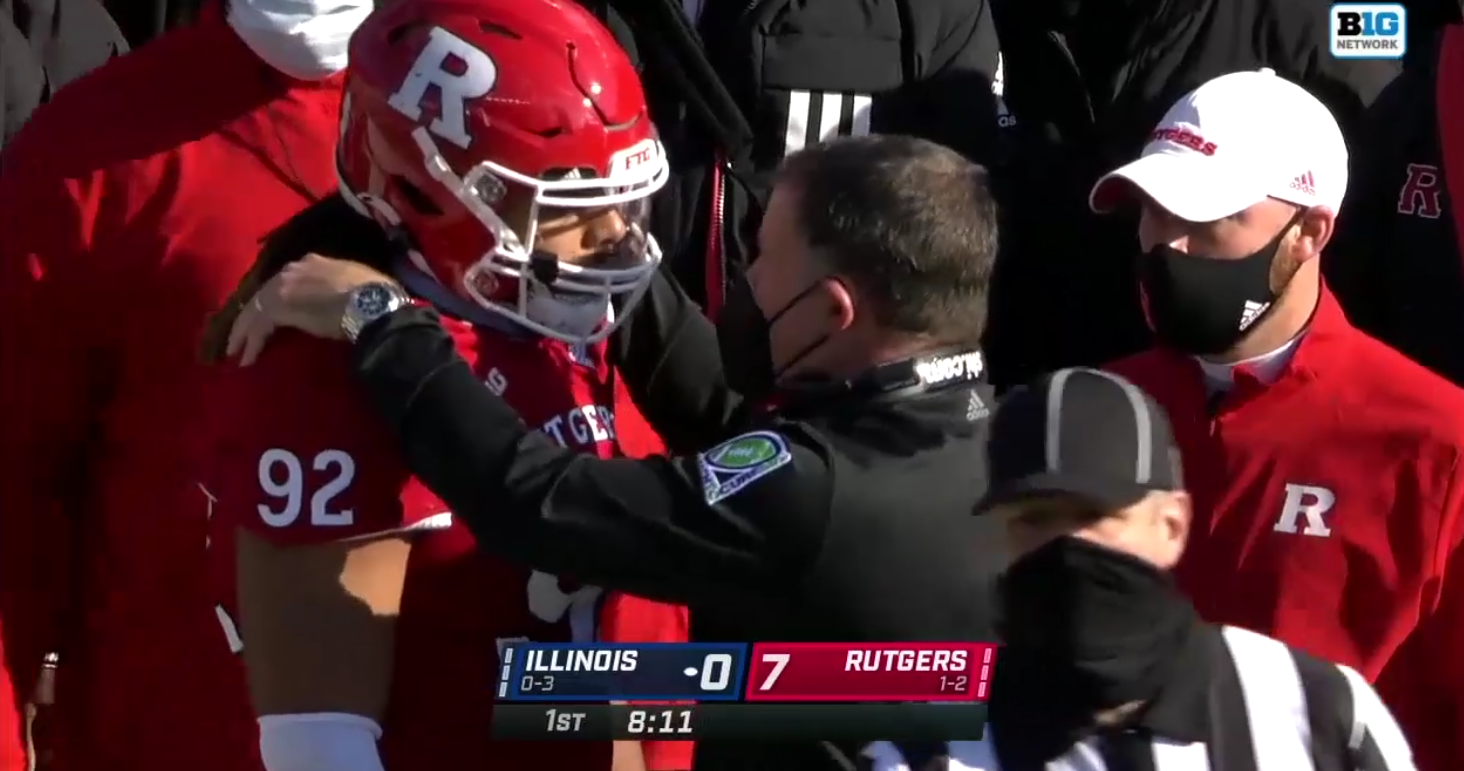 I feel for the kid. You know it wasn't you, but you can't really "coach, it wasn't me". Just have to take the lecture.

{invites children to gather around grandpa}

"You see, kids, back in the 60's and 70's, football was a different sport. You could hit anyone, anywhere, any time. Dick Butkus would tackle you by your head."

"I mean, this was even legal." "But then they changed the rules, and football is safer now. They protect the head at all costs. First, tackling by sticking your arm out and clotheslining someone was made illegal, and then, slowly, the made it more and more illegal to come anywhere near the head. Now, a player can be crouched down trying to tackle the guy at his waist but if the ballcarrier just happens to lower his head, targeting on the defender and he's ejected."

"But grandpa, I watched the Illini game and a Rutgers player clotheslined Bhebhe. Is that no longer illegal?"

"No, that's the original illegal. You must not know what clotheslining is because that's been illegal for decades."

"Here, grandpa - look at this gif on my phone. This is clotheslining, right?"

"Yes, that's clotheslining. And probably targeting. And also possibly a facemask. I'm certain that was flagged. They flagged Milo Eifler for hitting a guy in the shoulder in the bowl game - there's no way they'd let this go."

"No penalty was called, grandpa. That play did have two penalties on that play - roughing the passer and defensive holding - but nothing was called when Rutgers tried to decapitate Josh Imatorbhebhe."

"I don't even know what football is anymore. I guess we've come full circle to where they're watching so much for targeting that they no longer care about the original 'protect the head' penalty."

I guess I did do a little CTT-ing this week on Twitter. Check out the block from Luke Ford:

If we're not going to throw him the ball, at least he's getting to run around and hit people.

There was some confusion on the fair catch on the kickoff in the first quarter. A real quick recap of that.

In 2018, fair catches were added to college football kickoffs. Fair catch the kickoff and the ball is placed at the 25 like it was a touchback. This was added as a safety rule. Teams were practicing the high, soft kickoff that would land at the 15 and hopefully your fastest coverage guy is speeding down to hit the returner soon after he catches it. It became somewhat punt-like, and so punt-like rules were added.

It's especially useful when they kick it to the "other" returner. If you remember the Michigan State game last year, MSU kicked it to Justice Williams in the second quarter (away from Dre Brown) and Williams fumbled on the short return. They tried it again later in the game - before our game-winning drive, to be specific - and Williams called for the fair catch giving us the ball at the 25.

On Saturday, a new wrinkle emerged. We called for a fair catch but the ball was placed at the 13. What?

Here's why. This is the moment when Reggie Love catches the short kickoff. You can't see it just out of the frame, but Khmari Thompson waved his hand for the fair catch. 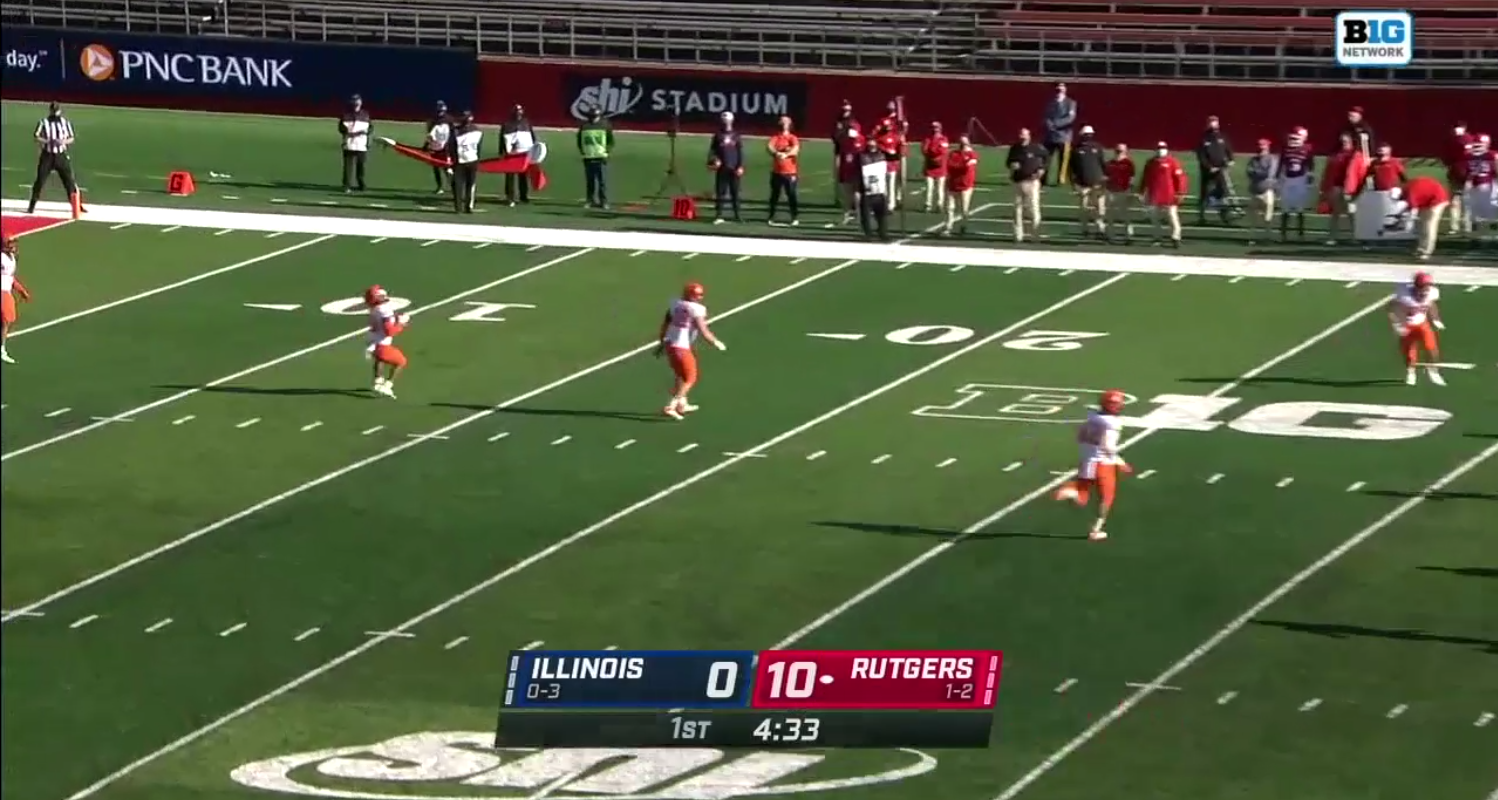 Clean it up, Ligs.

Ineligible Man At The Other End Of The Field

You probably hear the term "RPO" a lot - Run Pass Option. And you probably heard Pat Fitzgerald's rant about how it's "communism". Why do defensive coaches hate RPO's so much? Because teams get away with ineligible men downfield all the time.

The rule: not everyone can go out for a pass. This isn't afternoon recess. In college, guys wearing numbers 50 through 79 are self-identifying as ineligible receivers. It's somewhat complicated, but the only thing you need to know: your left guard or right tackle can't go out for a pass. At no point can they be more than three yards beyond the line of scrimmage on a passing play.

Those linemen are "downfield" on running plays, though. The right guard will pull around, head through the hole, and block a linebacker five yards down the field or whatever. You can run "downfield" - you just can't run down there on a passing play.

RPO's are both. The QB might run it, he might act like he's running it and then throw it. The reason: get the defense reading one thing, do another.

This makes it especially difficult on defensive linemen. They don't know what play is coming (obviously), so they make their "am I rushing the passer here or am I chasing the ballcarrier?" decision based on what the lineman in front of them does. If the tackle kicks out in a blocking stance, time to rush the passer. If the tackle pulls around to run block on the other side, obviously a running play.

RPO's disguise that. A pass play where nobody pass blocks. It plays out like a running play and then suddenly the ball is in the air.

The problem, as defensive coordinators will tell you: so often, there's at least one lineman more than three yards downfield. He's pulled around and is way down the field blocking some defensive back when the QB decides to go with the "throw it" option. If you're a line judge in college football, I'm guessing you hear "77 was ineligible AGAIN" from the coach about 35 times every game.

Quite often, it's not picked up. I mean, it was last year on the touchdown to give Illinois the lead over Wisconsin just before the half. Peters hits Bhebhe on a long touchdown but it was called back because we had a lineman 5-6 yards down the field. But other times, it's simply missed.

Like this. Look where Julian Pearl (#54) is standing when Isaiah Williams throws the pass.

The play worked how it's supposed to work. The defense read the run, the corner released Casey Washington to the safety, but watch the safety come into the frame after reading the running play, leaving Washington wide open.

But also look at Julian Pearl when Williams released the pass: 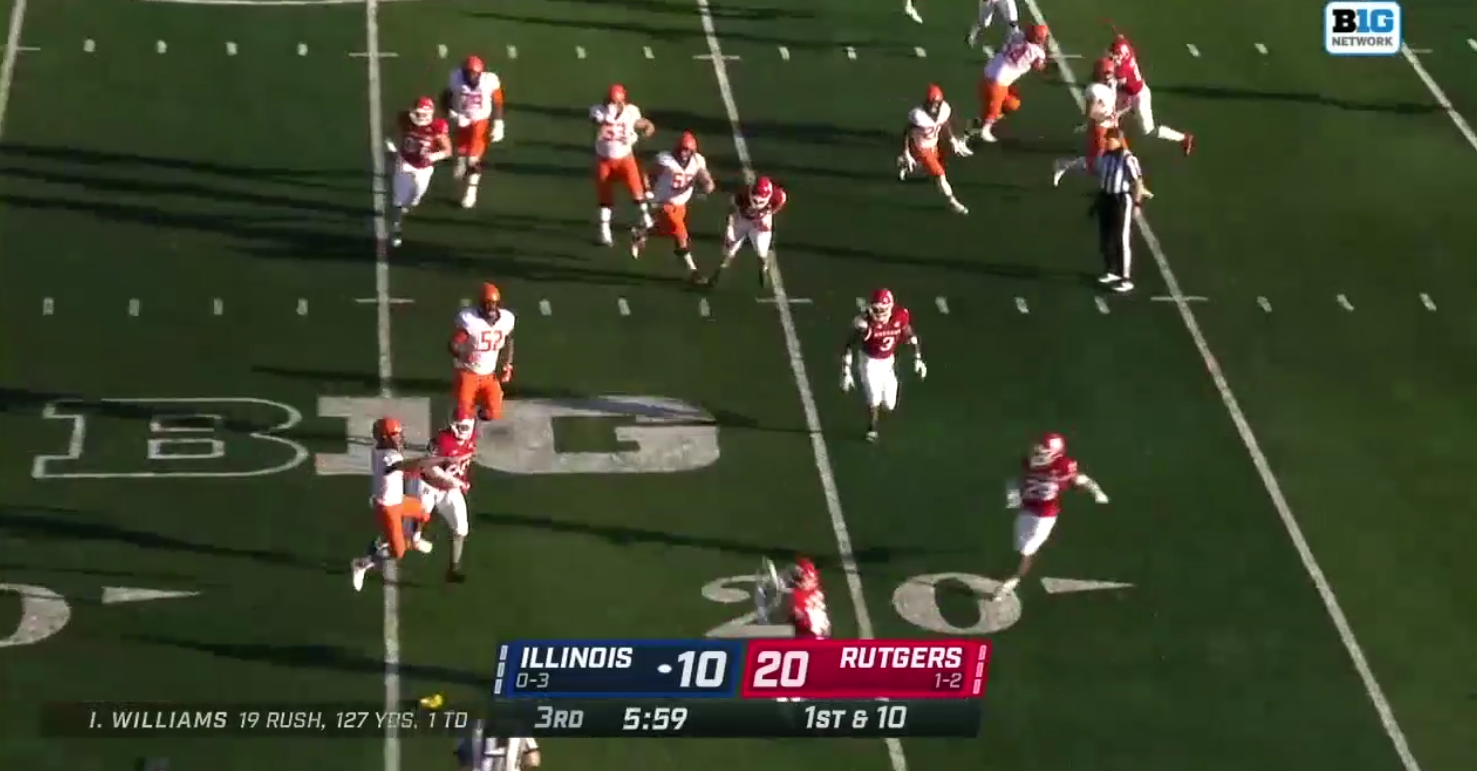 The line of scrimmage is the 24, so Pearl is a good eight yards downfield when this pass is released. Heck, Doug Kramer (#65) is right at the limit of three yards.

That's why defensive coaches get so angry about it. Once the linemen are blocking someone down the field, the defensive players don't even need to worry about the pass anymore. They can release every receiver and go make the tackle.

And when it's not called in situations like this (the flag you see on the field there was for offsides on the defense), then we get first and goal when it really should have been 1st and 15 from the 29. (I'll take it.)

OK, I went one minute over and I now have to hit the road in 14 minutes. I'll pack fast.

More CTT next week. I promise.

So neophyte question. I think we got called for two illegal formations on offense. As the talking heads explained it, the lineman’s helmet has to be within 1 yard of the football. Cool, now I get that penalty. Then they showed the replay and both times I’m looking at the ball, the helmet, and the yard markers thinking...That appears easily within a yard? What did I miss?

The offensive tackle still had to be aligned (sort of) with the offensive guard. His head was barely reaching the hip of the guard. He was basically in the spot a wing back might be aligned. The refs will generally throw a flag in situations like that.

I am shocked, SHOCKED to discover that highly paid experts on tv would explain a concept poorly.....Thanks, I figured it was something like that but it’s been bugging me all week.

The term they used to use was "shade" him. The OT has to "shade" the OG, who has to "shade" the C.. Basically the helmet and shoulders had to be no further back than the hips of the guy inside. Its a little bit subjective, especially when the OT gets in a two-point stance. The Pearl call was probably a good one. He was back there quite a bit.

Robert, I really enjoyed what you had to say. Thanks!

Glad you started to explain the RPO and linemen downfield stuff. Watching Craig’s Scout on Nebraska it seemed like every dang RPO play they had linemen way downfield!

Good stuff Robert. Would just say that Ford had a horrendous block attempt later that drive.