Here's where my brain goes for tomorrow: can we continue to run the ball well? Because for all our issues, we've run the ball fairly well this season. So if there's any hope (and when you're 15.5 point underdogs against a 1-2 team, there's not much), it's that we could establish the run and control the game.

This is the tweet that started me down this line of thinking:

Here's a larger image of that graphic: 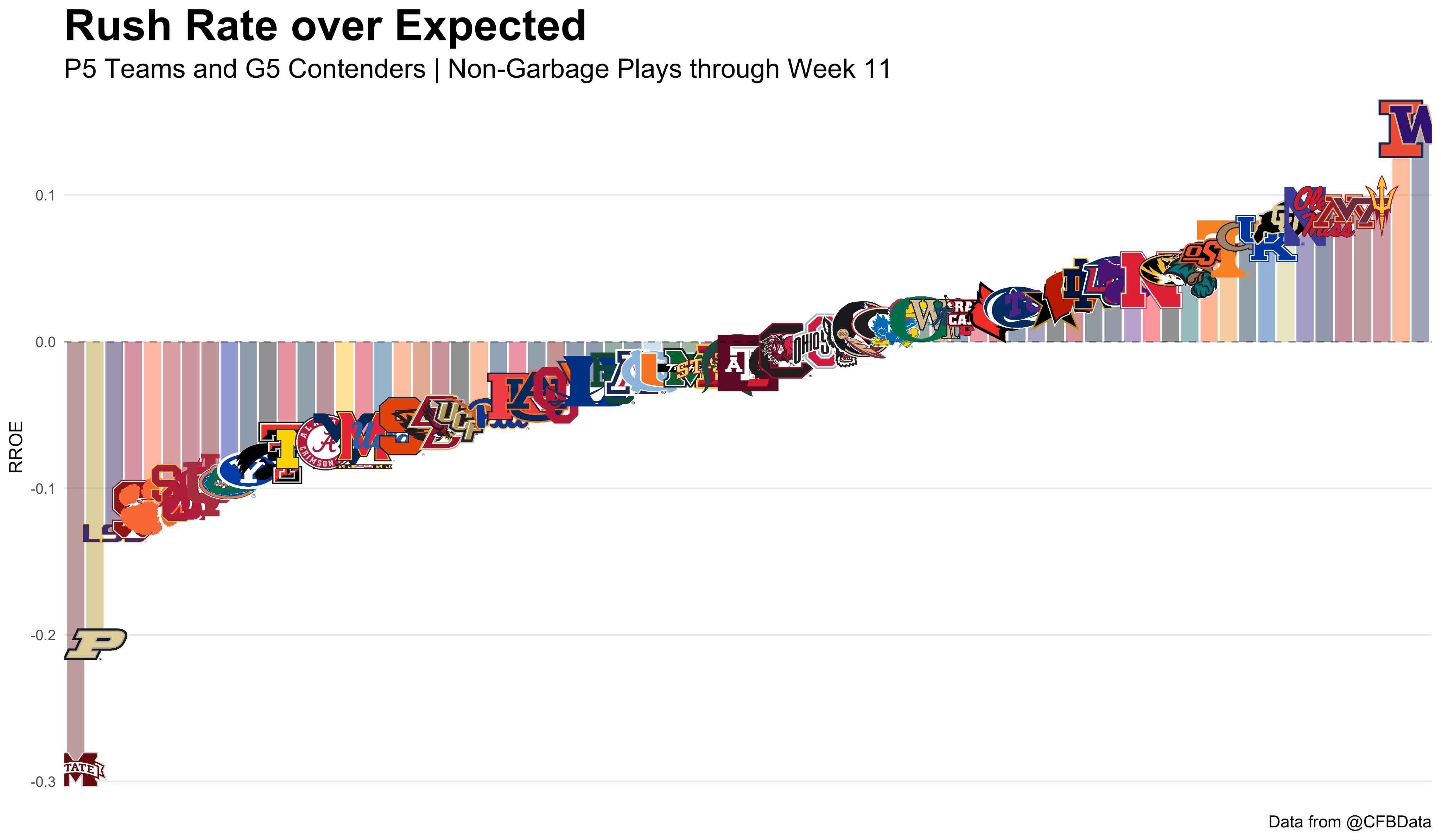 So let's talk "rush rate over expected". It simply means "given the down and distance, these teams run way more than 'expected'". It's no surprise to see Mississippi State and Purdue so far in the negative (they'll throw on third and inches). It does surprise me to see Illinois so significantly run-heavy. Yes, four starting quarterbacks in four games, but still, that's Navy territory. As the tweet says, we've certainly been "establishing it".

That led me to look up our rushing stats.

18 teams run the ball more often than we do (at least when you're looking at the ratio of run plays to pass plays), so if we're that high on the "rush rate over expected" chart, that means there's also some "Rod calls for runs when nearly everyone else would call a pass play" going on. That seems to check out in my brain. And I'm sure all of the delayed QB runs on third and 13 have a lot to do with that as well.

Then let's look at Nebraska's defense in those two yards categories:

See, if the line wasn't 15.5 and we didn't just lose to Minnesota 41-14, that's the kind of stat where I'd start asking "wait, are we going to pull a Wrigley tomorrow?". Nebraska just gave up 250 rushing yards to Penn State who was 106th nationally in rushing yards per carry coming into that game. If Penn State is the 88th-best rushing offense and they put up 250 yards on the ground at Nebraska, what might the 32nd-best rushing offense do?

Now, it's still very early. We've played four games, Nebraska has played three. So these stats are going to move.

And this isn't the type of thing that's going to lead me to pick Illinois to win. Remember, we have these, uh, defensive issues. Somewhere there's a Nebraska blogger writing this exact same thing.

In fact, looking at the stats, he's writing the EXACT same thing. We're 32nd nationally in yards per carry, Nebraska is 36th. Nebraska is 72nd in yards-per-attempt allowed, we're 83rd. So they're thinking the exact same thing. "Illinois can't stop the run, and we can run it". Maybe this will be another Wrigley game - 10 years and one day later - except Nebraska will be the Illinois.

So I think that pushes me towards a higher score. The over/under is 59.5 but I'm thinking over. Both teams run the ball well, but Nebraska's running game is better and they pull away. We cover, but we lose.

Over the past 3-4 seasons, I can't recall seeing such consistency in the "expert fan" predictions during the week leading up to our Big 10 game. I'll bet I've now read ~25 different prognostications and the score generally shakes out somewhere around:

The 2 touchdown Vegas spread is pretty much holding up universally.

We have a secret weapon that was missing at Wisconsin but has now made two straight away games. So it’s Robert to the Rescue, and a fun post-game presser.

Robert- do they filter out the "scrambles" here?

I assume they do, but it seems like we get a lot of 4-6 yard scrambles when no one gets open and its 3rd and 9. I guess I'm figuring they filter those out?

I think we have to look at the stats for the Wisconsin game, where peters was QB vs the other 3 games where Taylor and Williams are obviously more into rushing the ball. Because I expect we are on the "peters game plan" today, not the one of the last 3, where Rod probably felt that IW/Taylor running on 3rd and 13th was a better option than expecting them to pass accurately. The same won't be true today.

Robert -- any second thoughts on those long drives to NJ and NEB on consecutive weekends?