I Take That Back

When Penn State jumped out to an 11-2 lead, I tweeted "hovers over 'maybe we're just not that good?' button". When Brad Underwood called a timeout five minutes in with his team trailing 19-4, I tweeted the statistics so far at that very moment in the season. I wanted it on the record:

And from that point forward, we outscored Penn State 94-62.

I tweeted a little later that I had discovered the exact low point of the season. 5-3 having lost three of four and losing this one 19-4... and now we won't reach a point that low for the rest of the season. Outscored Penn State 94-62 after that and now a run of 5 of the next 7 at home with the road games being the two teams picked 13th and 14th in the Big Ten before the season.

I've been hating life during this five-game stretch where we lost to Baylor, Missouri, and Rutgers. But then I go look at KenPom and after the Baylor game we were 24th in the country and now we're 7th. So the NERDstats are kind of screaming "nevermind these three losses - this team is rolling right now".

And it's rolling based on offensive efficiency. We see that in the stats (7th nationally in field goal percentage) and we see that in the NERDstats (5th nationally in offensive efficiency). I only dabble in the NERDstats, so this will be a little blunt for your statheads, but here's how I see that ("that" being "we're shooting at a high percentage and it feels somewhat sustainable").

So I see it in this "the good shots have increased significantly which is why our offensive statistics have improved so much" thing. And there was no better example of that than this game. Penn State shot the ball incredibly well. Maybe the best they'll shoot in the next five years. And we still pulled away and won by 17.

Let's just go through those statistics. Once the game was out of reach, Penn State missed their final eight shots. But up until that point, here are the statistics. I highlighted all of the two-point jumpers: 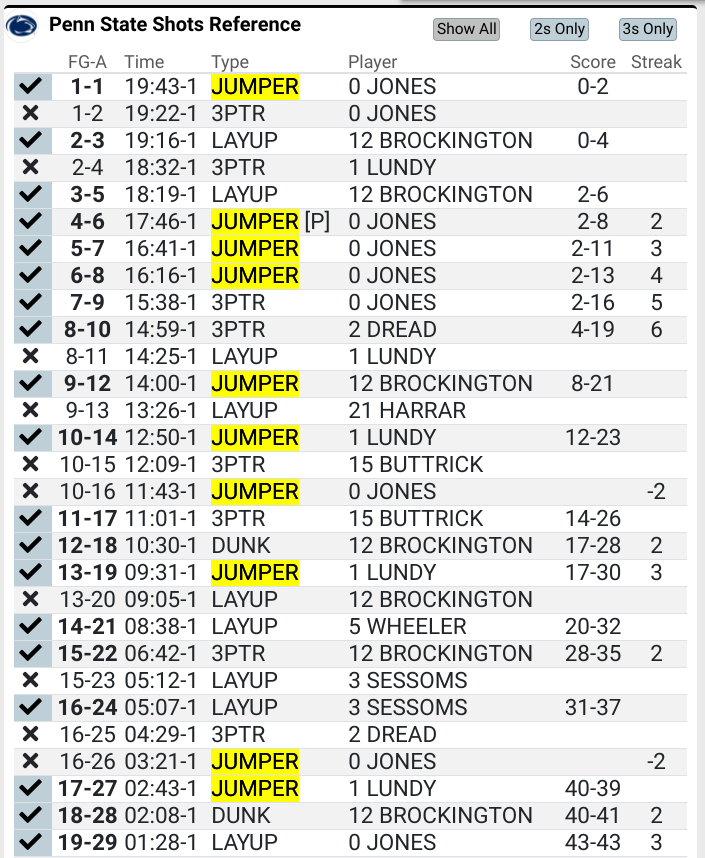 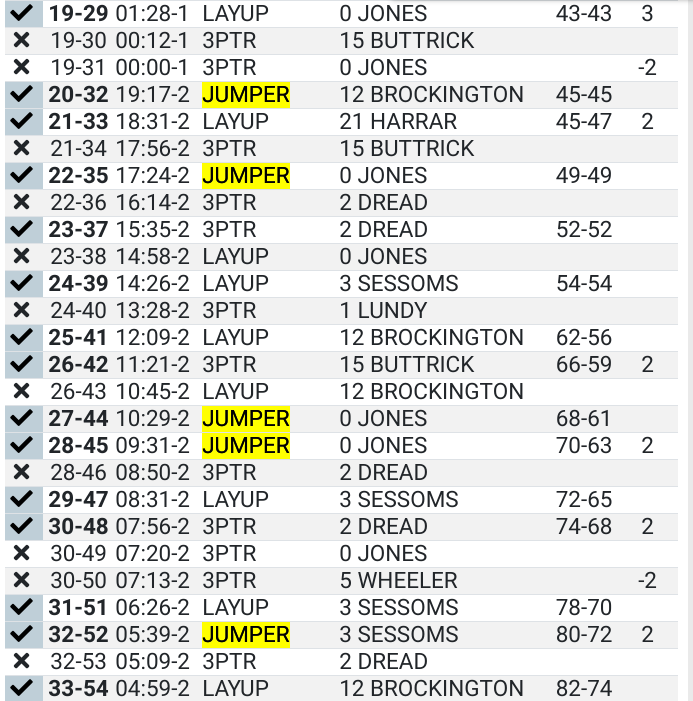 (I'm in a total fight against my heavy eyes at this point. After the game I drove to the Pittsburgh area to knock a couple hours off of tomorrow's drive. It's now 1:41 am and my eyes are HEAVY. But I'm going to knock this out.)

It was still a game with five minutes left. Illinois had an 82-74 lead. Why was it still a game? Because Penn State was shooting out of their minds. Here's the craziest stat:

In the first 35 minutes of the game, Penn State took 15 two-point jumpers. Not layups, not threes - two point jump shots. The thing every college defense is trying to force. Lower percentage of makes than around the rim, fewer points than a three pointer.

Of those 15 two-point jumpers they took, Penn State made THIRTEEN. 13 for 15. It was insane. I'd be willing to make a very sizable bet that Penn State does not shoot 13 for 15 on two-point jumpers in any stretch of any game for the next five years. Nobody besides Villanova in the 1985 NCAA title game makes that many jump shots. Who shoots 86% on JUMPERS?

Yet even with with their incredibly hot shooting, they still trailed 80-72 with five minutes remaining. How? Because our guards were getting to the rim with ease and either making the layup or getting fouled. (Or missing, watching Kofi get the rebound, and then watching Kofi dunk it.)

I was trying to think of the last time that happened. I remember games where the other team just can't miss, but I don't remember being comfortably in the lead while they kept hitting shot after shot. And I certainly can't remember a game where we shot 5-16 from three, the other team made 13 of 15 two-point jump shots, and we still won very comfortably.

The credit to that goes to, well, everyone. Let's make a really fast list before I fall asleep.

Add it all up and.. I take back what I said. I don't need to press the "maybe we're not any good?" button. I don't need to mark the time where we're trailing 19-4 and wonder aloud what happened to the team we all expected. They showed up in a big way tonight (on the road) and now I can't wait to see what happens next.

I appreciate the typo at the end.

Had I been sitting there with you in Bryce Jordan, I would have calmed your nerves in the 1st 5 minutes. I was never worried in this one.

Quite the unique Illini road trip, huh Robert? Thanks, as always -- and Merry Christmas!

Was listening to the start of the game on the radio. Announcers said Penn State has not played a game for 10 days. Thought they would come out rusty and Illinois would establish a big lead early. Then just the opposite happened. As Robert expresses it, I was going HooBoy. So for the team to storm back, especially in the face of continued good shooting from P. S., was maybe a defining point of the season?

Fantastic reference to Georgetown/Villanova title game. Totally bizarre box score. Georgetown took 53 shots. Villanova only 28 (seems impossible), but made 22 for a 79% success rate. As for free throws.....6 for 8 from the Hoyas, and 22-27 for Nova. I can imagine that disparity did not sit well with the Georgetown faithful.

I thought BU used the first half of last season to shape the team not only into the team he wanted but a darn good team. He's doing the same with this one. Yes, we have more talent but it's a process of getting that talent to work together, bond and believe in each other (mostly Curbelo, Miller and Granderson with a little Giorgi thrown in) . We still might not be all the way there (Miller and a bit of Giorgi although he's starting to settle into his role) but we are close. I had some friends who were a little upset with Ayo at the end. Not me. From his angle it looked like the player took a cheap shot at one of his brothers. That's leadership and bonding with your teammates which will pay off huge down the road.

Love that BU stood up for afterwards.

Rewatch game, mr headband had other issues. At one point he was pushing into Illini huddle, wouldn’t leave, was talking. Even after as the ball was preparing to be inbounds he was up in Millers face talking. Couple other chippy plays as he was involved in one with Damonte as he was going to the baseline and arms “tangled”, etc.

It's natural over-react when you have a couple early season close losses to Rutgers and Missouri , and then when the game starts 19-4 it seems like the sky is falling. Just have to remember we're good, and weird things happen in the game of basketball. Since we expected Ayo and Kofi to go off, I thought the story was Grandison and Curbelo. Grandison gave great minutes and made inspiring hustle plays, which is exactly what he needs to do, and Curbelo in his 9th college game with his 8 assists and ability to finish at the rim (including that incredible twisting layup in the second half).

They need more consistency on defense and with FTs. Offensively, everyone on the floor is a weapon, eight deep, even Damonte. Wowzers.

Can you email me at pfruin@maynardcooper.com. I have bene trying to give you money for several months and finally was able to log into my account. But now when I fill in my One of the 17 subscription, it is telling me i am not logged in and it wont go through. I know I am logged in because it says I am and I just read my first story under my log in.