Man, what did I do to myself in promising one of these posts in the morning and one in the evening every day? These are a bit exhausting to write - articles where I dig through my memory banks always are - so two per day is going to be difficult. But hey, I've got nothing else to do, so who cares about a little mental exhaustion?

That debate we had on Twitter about the best four-year span to be a student in Champaign (sports-wise)? There are several eras that can be debated, but I don't think one single year can be debated. The best year to be a student: the 1983-84 school year. Rose Bowl followed by Elite Eight. Only 2001-02 (Sugar Bowl followed by Sweet 16) comes close. For my five years in school, the best we got was 1992-93 (Holiday Bowl + Round of 32 loss to Vanderbilt).

I've written about this before but 1983-84 is the reason I'm writing this today. An Illini fan was born at age 11. As I mentioned yesterday, I can remember watching games with my dad all the way back to 1980-81, and the first team I absolutely worshipped (once you're old enough to understand how to follow a team) was the 1987 basketball team, but in 1983-84, all of this was born. Rose Bowl + Elite Eight.

This doesn't have anything do to with the 1984 team, but the Sports Illustrated issue from November of that year previewing the 1984-85 season, the one that ranked Illinois #2, was the biggest magazine surprise of my childhood. You wait for the SI basketball preview to arrive, you rush home from school, you see that your mom put it on your bed, you tear through all the ads to find the rankings, you see Illinois #2, and you nearly pass out.

OK, this post will be late because I just spent a long time looking for an online copy of that specific SI and I finally found it. I knew there was a photo of Anthony Welch on it, and here it is: 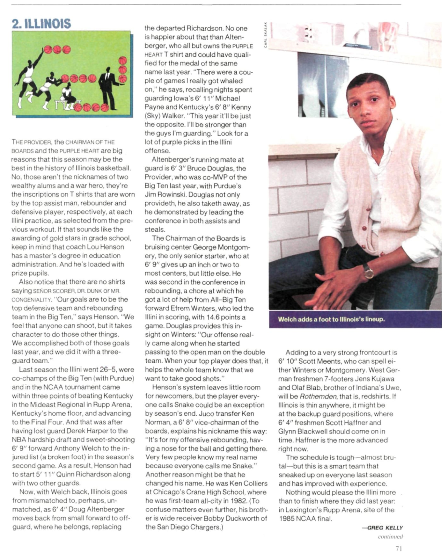 Oh man the memories flooding through my brain right now. I swear I read that exact page 150 times. When I say a fan was born that year, I mean BORN.

OK, the 1984 team. First off, the big injury. Anthony Welch, pictured above, broke his foot and missed the 1984 season. So Lou Henson had to go small with thank-god-he-redshirted senior guard Quinn Richardson joining the starting lineup with Bruce Douglas and Doug Altenberger. Three-guard lineup in 1984! Lou Henson, trendsetter.

The front court was Efrem Winters (up there with Ken Norman on the under-appreciated Illini players list) and Big George Montgomery. Man, the 80's just had great team after great team after great team. Bruce Douglas was as good as any guard that decade, Efrem Winters was the highest-ranked recruit to pick Illinois in a long time, Doug Altenberger was maybe our best pure shooter in history, and even sixth-man Scott Meents spent some time in the NBA with the SuperSonics.

So why wasn't that a Final Four team? Here, kids, let me tell you the story of Dicky Beal...

The Illini make it through to the Elite Eight. One game away from the Final Four. The matchup: 2-seed Illinois vs. 1-seed Kentucky. The location: Rupp Arena in Lexington. Wait, what?

You know how I mentioned that the Illinois-Miami game in the Tournament brought on the whole "officials can check the monitor to see who last touched the ball in the final two minutes" rule? Well, Illinois also had a part in changing the "college basketball teams can't play Tournament games on their home floor" rule. Because Kentucky beat Illinois on their home floor to advance to the Final Four. OR DID THEY?

Illinois scored to make it 52-50 with 20 seconds remaining. Kentucky gets the ball to Dickie Beal who got the ball to halfcourt and then traveled, giving the ball back to Illinois with a chance to - WAIT, I've just been handed a note and it says that the officials did not call the travel. Not sure why but the note says "the officials, who were officiating a game on Kentucky's home floor in front of Kentucky fans, did not call the travel on Dickie Beal". Bruce Douglas then tied-up Beal and the ensuing jump ball gave the ball to - wait, another note being handed to me. Officials called a foul on Douglas instead of the jump ball, Kentucky hit free throws and won.

Don't believe me? Watch it for yourself. Even the announcers can't believe it wasn't called.

I'm getting sad for my 11 year-old self again so I need to move on. Just know that the 1984 Illini team was amazing and didn't deserve that call on Kentucky's home floor.

I always do this. I started this post three hours and 15 minutes ago and I'm just now getting to the second team. I always think that I need to add a little more, and then a little more, and the next thing you know it's 3,000 words and five hours. It's a good thing I'm getting paid to do th... wait, I've just been handed a note.

The 2010-11 Illini team was supposed to be the big turnaround team. The season before had been an incredibly bumpy ride (ranked preseason, went to the NIT), but with a high-end recruiting class coming in (two top-30 players in Jereme Richmond and Meyers Leonard), things were going to turn around. Richmond was the first McDonalds All American in forever, so things were looking up in Champaign.

And the pundits agreed, putting that team #13 in the preseason polls. (Remember those "when will the polls ever learn" days? Ranked preseason in 2010.. NIT. Ranked even higher preseason 2011 and then the December loss to UIC blew that to bits.)

OK, so that Illini team, which I'm currently trashing with "HOW DID YOU LOSE TO UIC???" - still pretty good? I mean, it would have destroyed last year's Illini team and would have been a really solid matchup for some other 7-seed to 9-seed Illini teams.

Maybe I should say it this way. Potential-wise, this team was an upset waiting to happen. Even with my whole "when will they learn?" paragraph above, I kind of get why they were #13 preseason? Demetri McCamey is coming off a 1st-team All Big Ten performance the previous season and is on the shortlist for Big Ten Player of the Year as a senior. Mike Davis had been a second-team All Big Ten as a sophomore and, after a down year as a junior, was primed for a big senior season. There were two other seniors (Mike Tisdale and Billy Cole), so the whole offseason had a 1998 "whole buncha experienced seniors" vibe.

But wait, there's more. DJ Richardson had just been named the Big Ten Freshman of the Year the previous season. Brandon Paul had a solid freshman season, too, and Tyler Griffey showed promise. And those two top-30 freshmen (Richmond and Leonard) filled holes on the team. Those four seniors including a potential Big Ten Player of the Year? Those three sophomores including the Big Ten Freshman of the Year? A McDonald's All American and another top-30 freshman? Yeah, how does that team NOT end up preseason #13?

As you may know, the road was bumpy. Jereme Richmond didn't make it to the end of his freshman season. Different lineups were tried, and nothing seemed to really fit. There just seemed to be some kind of disconnect between the four seniors and the sophomores and freshmen.

Maybe that's a good team for a bracket like this? Capable of beating the 4-seed and then losing to the 12-seed. When they were on, they were so good (see the UNLV 8/9 game that had us all believing they could give Kansas a game). When they were off, they were... off. See UIC.

So maybe they were ripe for an upset? Go vote here on Twitter. I'm off to start the next post.

I was living outside Philadelphia at the time and the Philadelphia Inquiry did a full-page cover story following the Illini/Villanova tourney game. The headline was "Drip, Drip, Drip....." as I recall. We were like a well-oiled machine, breaking opponents down. Stellar Lou Henson defense; near-perfect execution of our methodical offense; and, no shot clock yet in college basketball.

Of note: We lost to Kentucky (Bowie/Turpin) by just 2 points at home during the non-conference season -- that game where refs were pulled from the Assembly Hall crowd because the NCAA refs were unavailable due to extreme winter weather.

Great call on the picture at the top of the post - I believe the poster was captioned "Ready to Dance" or something like that. It was such a shame things were up and down and never quite came together for the 2010 and 2011 teams, I remember being so excited for the 2011 season. Always felt like Demetri McCamey ended up underrated as an all-time Illini player as a result...

I always thought he paid the biggest price for the state of the program at that time. Great player, but teams that weren't performing like we were used to. So how good could he really be, if the teams weren't better? Not fair to him, and probably a product of our frustration not his play, but I think that's why he doesn't get the credit he deserves.

I understand that the reasons for the difference are probably split between team success, Rayvonte's suspension, and Ayo's late-game heroics, but Rayvonte could flat out play.