As of this writing - Wednesday morning before the Bracket Matrix updates - we are currently averaging an 8-seed. And even when I put my Illini "we are WAY better than that" feelings aside, I just don't think we'd be placed that low. So I just spent the last three hours (hey, I have time) researching every possible thing I could about the NCAA team sheets. And I landed on one startling thing: we have the hardest road schedule in the country.

First off, an overview. Once the NCAA moved to NET rankings last year (instead of the RPI), they also changed the "team sheets" that the committee sees. All of that talk of "that's a Quad 2 loss" comes from that change. Here's how it works.

Each team gets a NET ranking. It's a "ranking", so everyone views it like that (Illinois is currently 36th, so people think that means the committee sees Illinois as the 36th-best team), but that's not how it works. It's used in the inverse. They use it to see who you beat and where. The only way that 36 affects us is that our opponents either beat or lost to the 36th-best team. It's not a number that tells you where you are - it tells you who you beat and who you lost to.

The quadrants are divided by home games, neutral site games, and road games. Obviously, it's much harder to win on the road, and the committee wants to see a team sheet with wins away from home. The four quadrants are as follows:

So when you hear about a bad Quad 3 loss, that's what it's referencing. If Missouri falls eight more spots (out of the top-100), it will move from a Quad 2 loss to a Quad 3 loss. That would give us two Quad 3 losses - Miami and Missouri - and, honestly, that's what has been holding our seeing down all season. Erase those two losses and we're talking about a 4-seed right now.

But still, something doesn't sit right about all of the bracketologists putting us as an 8-seed. Following every game, I'm acutely aware of A) how we've basically had to play every top team in the Big Ten on the road and B) how we've won five Big Ten road games. The Big Ten schedule is not equal - you randomly play seven teams home-and-home, three teams only on the road, and three teams only at home - so some conference teams are going to have a much tougher schedule than others.

Here's the stat that started me on this journey. I'm looking at the Big Ten standings this morning (like, first thing, on my phone, while still in bed). And I start thinking about our road games. Which ten teams do we play? More importantly, which three teams did we skip? Our road schedule (this skips #3 because we're #3):

The teams we skipped on the road:

Whoa, I say. If we have five conference road wins, and we skipped teams 11, 12, and 14 in the conference, then we have to have one of the best road records in the country, right?

So I went to the team sheets. The NCAA publishes them here each day. Please note that as I'm writing this, they haven't updated for "through games played as of March 3rd". That will probably update some time this morning, so by the time I've published this, the numbers might shift a bit, but I doubt it will change much about what I've researched.

The best part of that PDF is that it's color coded and all of the teams are in order. So for my robotic brain, I can scroll and scroll and scroll and look for differences. The biggest difference about the Illinois team sheet? All of the "A's" at the top of the Quad 1 list. From my scrolling, it appeared that we had more A's than any other team.

What are A's? Away games. What do I mean by "at the top"? Pay attention because this is key: the team sheets that the committee sees separates the quads into "high end" and "low end" games. Meaning that under the Illinois list, under Quad 1, they put the top half games first (Home 1-15, Neutral 1-25, Away 1-40) and then lists the bottom half games second (Home 16-30, Neutral 26-50, Away 41-75). They do this, I'm assuming, to see if a team just snuck in a bunch of Quad 1 wins by beating #29 at home and #68 on the road, or if their wins are spread around the whole quadrant.

Here's the Illinois team sheet. Notice what I noticed on my scroll. Every game except for one (home for Michigan) is in the top half. I'll say that again. We currently have 12 Quad 1 games on our resume. 11 of those are in the top half of Quad 1, and one is in the bottom half. We also have two upcoming Quad 1 games: Ohio State, which will be in the top half, and Iowa, which will be our second game in the bottom half. (Editor's note: once the rankings updated, Iowa moved above the 30 line and became a Quad 2 home game.)

The other thing that sticks out. All of the "A's". See for yourself. Look for all of the orange "A's" on the top half of the left column. 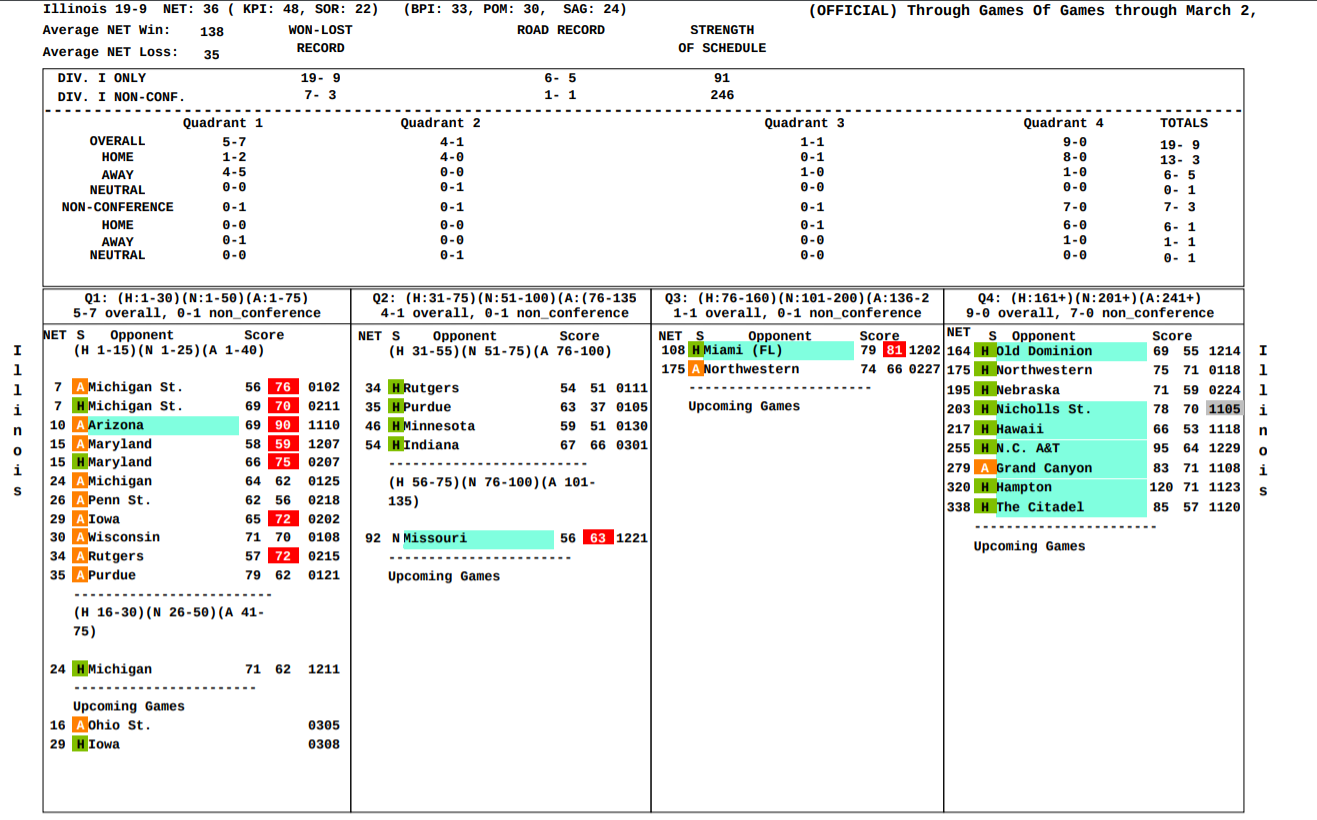 Now compare that to LSU's team sheet. LSU is NET #32, four spots higher than us, but notice their top-half/bottom half under Quad 1: 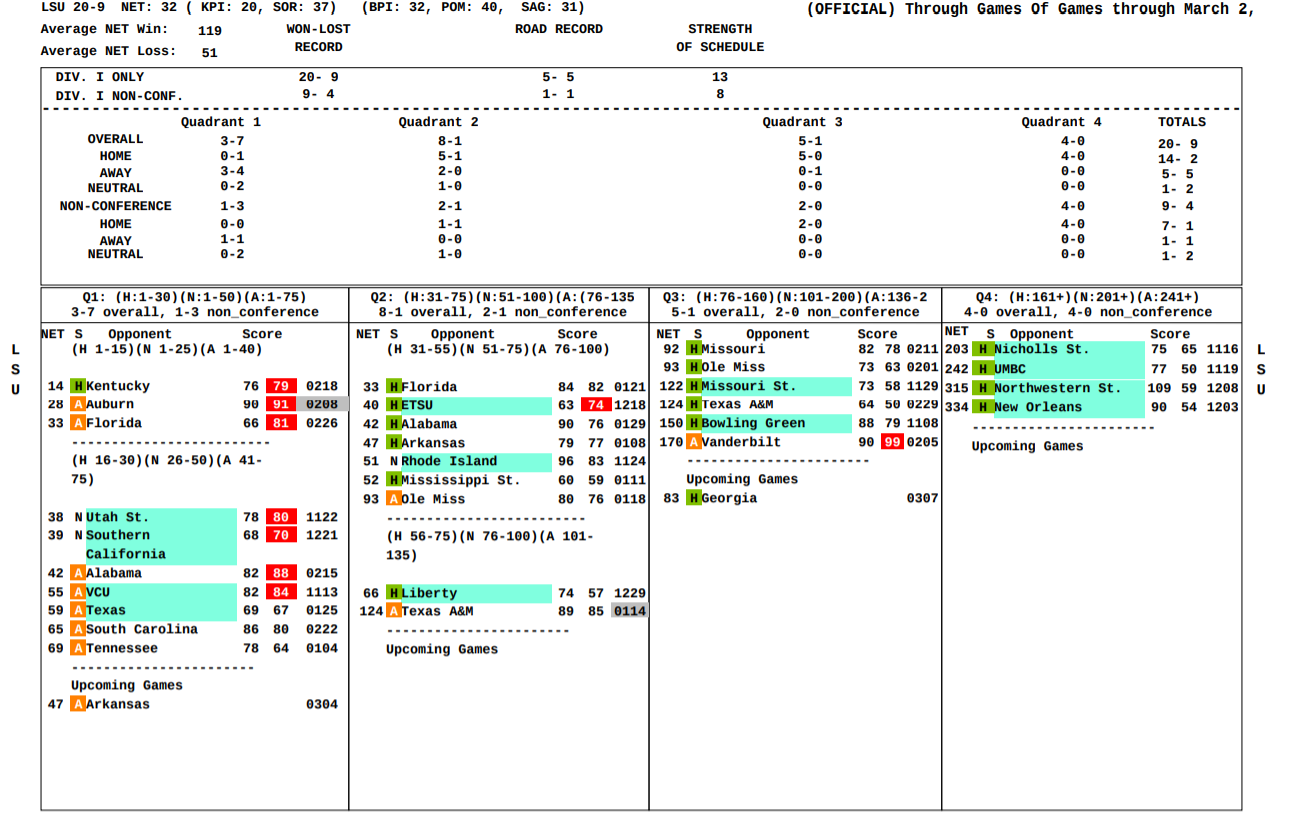 We'll have 12 top-half games by Sunday, 10 on the road. They'll have three, two on the road. If you see a bracket that has LSU as a 7-seed and Illinois as an 8-seed (like this one), throw tomatoes at it.

That got me thinking: do we have the best road record in the country? The answer is yes. I looked at the top-50 in NET and counted their top-half Quad 1 road games (road games against teams 1-40) and we have A) the most games, and B) are tied for the most wins.

This will be a long list, but here's the number of 1-40 road games for every team in the top-50 of the NET rankings, plus their record in those games.

That's a lot of data. But, uh, wow. TEN road games against top-40 teams. That's going to carry a lot of weight with the Committee. I'm ready to just state "we'll be two spots higher than everyone expects on Selection Sunday".

Now, that's not the only statistic. We have exactly one Quad 1 home win (Michigan) because we lost to Maryland and Michigan State. We also have these anchors called Missouri and Miami around our necks. I'm not arguing we're going to be a top-3 seed or anything.

But I am saying that these statistics, when the Committee stumbles upon them, will be very important:

(The highest non-B1G team? A few Big East teams plus Kansas and Alabama have 5 such road games.)

That's significant. Especially if we move the number to five tomorrow night. Had we scheduled any kind of tough non-conference (we didn't, and it hurts us), we could be talking about getting some surprise 2-seed or something. Of course, we lost to Miami and Missouri, so had we scheduled more of those games in December, we might have lost them.

It makes me settle here: win tomorrow night - five top-40 road wins on the season, the most in the country - and Selection Sunday will be very, very fun.

Nice work here. 2 comments on this:

It really points out one of my huge pet peeves this time of year - people who insist on talking about conference records and conference standings as having any kind of relevance to the selection/seeding process. Look at the schedule we played vs other teams, how the heck can you compare our 12-6 vs whatever record one of the better teams in the SEC managed? Please stop this, people!

The other thing is on those 2 (well only 1 now) "bad losses". My world view on this is they should be pretty much completely ignored when it comes to seeding. I have no idea if the committee is in agreement with me here (probably not). But to me, they are very relevant to the selection process, but once you're in and looking at seeds, you need to consider how teams did against other teams in the field, not against teams that didn't make it. And that jives very nicely with what you have here. Those top 40 teams include the bulk of the at large teams and many of the auto qualifiers, so a good chunk of that tournament field. And yes, we did quite well there, especially away from home. Which is where they are holding this tournament.

jdl is right. The tournament is on the road since the B1G lost the all star game this year. (That's still how it's decided, right?)

OK, a 3rd point. Using 30 as the cutoff for home Q1 wins....today we see Rutgers at #31, Purdue at #32. They play each other Saturday so maybe we get 1 of them into Q1? And Iowa is #34. You see a lot of the pundits touting Wisconsin's Q1 record and the number of Q1 games they have, yet slide that border a spot or two and Illinois (and maybe some other B1G teams) suddenly look magnificent as well.

Robert, congratulations on this new phase of your life. The added time for you to write came at a good time for your readers, as the basketball team is on an upswing. I love the quantitative analysis of our schedule and results. It kinda takes away the old barber shop arguments about which team is better, etc. Numbers typically don't lie, or as Bill Parcells said, "You are who your record says you are".

I like to dabble in amateur bracketology. I think you are focusing on the one specific thing that puts our resume in the best light. And while our high quad one road wins are certainly impressive, go to bracket matrix and look at the teams above us, compare their resumes to ours and it is hard to say we should be above them. You mentioned LSU, but their average bracket is lower than ours on bracket matrix.

Marquette? Some amount of Q1 wins, more Q2, no bad losses (we have 1-2 depending on if Mizzou falls)

Houston? Maybe the committee puts us above them based on those road wins. But overall resume is pretty similar (less big wins, but also no slip ups)

Arizona? I can't for the life of me understand how their NET ranking is 10, but it is and its hard to drop them down to an 8 seed with that net. Also, they smashed us H2H.

You get the picture. I think we will probably end up a 7 seed as WVA, Arizona, Marquette and others slide, but barring more work being done (aka roadkill in Columbus and a share of the title) I think we don't get higher than that.

I'll bet that road record looks even better when plotted on a timeline. Aside from one blip, the losses are strung left and the wins spread right.

Hopefully with two more over the coming days.

Great dive into the teams. Totally agree with you here. I looked at fewer team sheets, and the away games and victories visually stuck out. Especially compared to teams close by, like Marquette, LSU, and Butler. Even higher seed teams there is a stark contrast.

bad loss or not, i'm still going to go ahead and hope miznoz keeps losing.

Bored at the beach this morning - tried to find a comp for us from last year. Here is some data from the 2019 5-9 seeds:

Not much of a comp in there but maybe we look closest to Baylor? Regardless, the committee seemed very much in step with NET rankings last year. Those SOS/NCSOS numbers stick out badly.