This Monday morning feels kind of official. For the first time, I feel like the move is complete. The last seven weeks have been spent fixing up the condo for sale, putting the condo on the market, selling the condo, finding a place in Champaign, packing, moving, unpacking, and, you know, sheltering in place. Then yesterday was Zoom Easter. Today? Today feels like I have ten hours where I could write.

(Just watch, in a bit I'm going to segue into "Desmond Dan is moving too...")

You never realize how much time a move will take. And I'm not even talking about the whole "fix up things before putting it on the market" phase - just the moving part. How much time did I spend taking things and putting them in boxes and then labeling those boxes and then stacking those boxes? 100 hours? I'm a saver (my wife might say "hoarder"), and so all that saving comes home to roost when you move.

And then you have to unpack all of those things. You never realize how much time that will take. For some reason it seems like unpacking should be a lot faster than packing, but it's not. At least not for me. When I'm putting together my desk in my home office, I'm going through, like, every pen and evaluating whether I still need it. Maybe I bring all of this on myself.

Anyway, I feel like I'm finally here. I woke up this morning and, for the first time since mid-February, I didn't have a long list in my head of things I needed to accomplish in order to make St. Louis-to-Champaign a reality. Most every box is unpacked. The printer is finally linked to the wireless network (why does it have to be so hard?). My list today is hang the rest of the pictures and... write.

Which makes today feel kind of - let's use a fake word - monumentous. I know there's no sports to write about, and there might not be for 18 months, and I can cross all of those bridges when they come, but as of this morning, it feels like I'm finished with my transitions - both career and location - and I'm ready to start writing full time.

You know, when I was a kid, we always got the Monday after Easter off from School. I never really knew why, given that it was a public school, but I remember someone calling it Ball Monday for some reason. So let's call this that. Welcome to Ball Monday. Time to talk ball.

SPEAKING OF MOVING, DESMOND DAN IS MOVING TOO. And he's not only moving schools, apparently he's moving names? In everything you read about him at New Mexico State, he went by "Drew Dan". He's on the NMSU roster as "Drew Dan". But on Twitter he's Desmond Dan, so maybe new school new name? His bio on the NMSU site says he's the son of Desmond Drew Dan Sr., so apparently he's always gone by his middle name and now he's going to go by his first name? Or maybe he'll still go by Drew in Champaign?

Whatever it is, I like it. Three first names. My dad knew a guy named Elliot Elliot Elliot. That's the end of that story.

Dan is the second of (now) three grad transfers: Christian Bell from Wisconsin, Dan from New Mexico State, and Blake Jeresaty from Wofford (he's the next post). We should probably put that in context first.

Last year there were four grad transfers: three from USC and one from Michigan. This year, so far, there have been three grad transfers: from Wisconsin, New Mexico State, and Wofford. Just looking on the surface, these are not players who might make the impact that Peters, Imatorbhebhe, and Betiku made. These are not the "former four-stars who couldn't make the two-deep at their blue blood" type. Bell is somewhat like that, but Dan and Jeresaty are not. They're the "I think I can play Power Five football" type.

So we have to start there. When I said I expected Lovie to sell last year's transfer success to this year's grad transfers ("see what Bhebhe and Betiku did? you're next"), this is not what I expected. I expected more Betikus. This is not Betiku. There's still a few more to give, and we landed Peters and Bhebhe in the summer, so there's plenty of time, but... this is not that.

Which is OK, I guess. There's not as many glaring holes in the 2020 roster. We could probably use another defensive lineman (really wanted Swann from Stanford - he picked Indiana), but for the most part, the 2020 roster seems set.

When looking at the wide receiver roster going into last season, we kind of knew that the transfers would need to make an immediate impact (I thought it would be Sydney - it turned out to be Imatorbhebhe). With both Sydney and Imatorbhebhe back, plus Ricky Smalling back from injury, plus Donny Navarro emerging last year, plus Casey Washington, there's not nearly the number of catches available for Dan as there were for Imatorbhebhe.

Which is why I see Dan as reinforcement for 2021 more than I see him as a 2020 guy. There's a big "if" there, being "if he gets a 6th year of eligibility". His New Mexico State roster page lists him as missing both the 2016 and 2019 seasons with injuries. If that's the case, you can apply for a 6th season after your fifth and final year. You can't apply if it was one year of a regular "not ready yet" redshirt and one year of a medical redshirt, but if both were seasons missed to injury, you can petition the NCAA for a sixth year. So, if Dan can get that waiver, he'd be eligible in 2020 and 2021.

And 2021 would make a lot more sense. As of right now, I think the top-5 pass-catchers are Imatorbhebhe, Smalling, Sydney, Navarro, and Washington. So Dan will be competing with Kyron Cumby, Jordan Holmes, Edwin Carter, and Dalevon Campbell for snaps and catches.

Is he able to be that guy? I'm not sure. I really like Campbell, so he's my breakout candidate, and I'm not sure I can see Dan taking a spot from one of the five guys listed above, so... I just see him as a backup option in 2020 and then perhaps a big leap in snaps and catches in 2021.

His career stats at New Mexico State list 48 catches for 582 yards in 26 games, so that's 2 catches for 22 yards territory. I'm guessing that's why his Twitter only lists offers from UT-Martin, Western Illinois, and Duquesne since he entered the transfer portal. I guess it makes sense that given those stats + his injury concerns, no other FBS teams gave him an offer. And I think we can also maybe read into this a little bit that it's April, we're not seeing the Sydneys and Betikus giving us the time of day, so we're offering guys who are more on the Plan B grad transfer list.

Bottom line, this is a guy who currently has an FBS wide receiver spot, he announces that he's entered the transfer portal, and until we offered on Thursday, he was going to have to transfer down to FCS. So I think we can set our Tom Cruises just based on that. Here's hoping he, wait for it, proves me wrong. 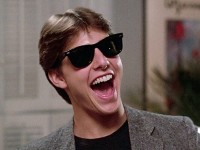 Ouch. I knew this wasn’t going to be a home run but was hoping for something better than a sac bunt. Only guess is somebody sees something stats and film don’t show...I don’t see it. Maybe he has next level hands(hidden) and sits in the slot? The team went thru sooo many injuries last year at wr I get depth building, but .......

Are we talking suicide squeeze or just moving the man on first over to second? ;-D