Sparks, like Phifer Griffin, enrolled early in January. So we would have gotten our first glimpse of him had we had a spring game. Instead, the only glimpse we've had are weight room videos from Lou Hernandez. Let's start there and then we can get to the 90i stuff.

That teaches me two things:

This is not an insult. Very few freshmen arrive looking like Larry Boyd. I'm just pointing out that we have one data point so far and that data point is "needs to turn 6'-7"/300 lbs into a football-ready 6'-7"/315 lbs. of muscle". 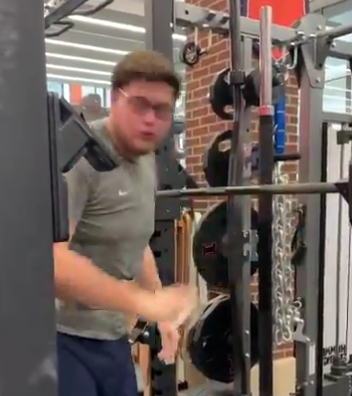 It needs to be stated again. I think I did this in the Sparks LLUOI post as well, and it's never great to write about one player and immediately talk about who he isn't, but this is how the 2020 OL recruiting went. It's pretty simple: the Plan A class was Jalen St. John, Kevo Wesley, and Marcus Harper. Jalen St. John is at Arkansas, Kevo Wesley is at Vanderbilt, and Marcus Harper is at Oregon. In their places, we landed Phifer Griffin, Blaise Sparks, and Kevin Tyler.

We might look back in five years and say "Griffin-Sparks-Tyler ended up wayyy better than St. John-Wesley-Harper". But that's how Plan A/Plan B went with this class. We landed Harper and he flipped to Oregon. We lost out on Wesley to Vanderbilt. And we lost St. John to Missouri (and then, after Barry Odom was fired, he flipped to Arkansas).

So the "background" here is that Griffin and Sparks were originally slated to be St. John and Harper.

I'm doing all of this talking around Sparks and not talking about Sparks because we just don't know much yet. I liked Sparks better than Griffin on film, so I gave Sparks 2.5 Cruises and Griffin 1.5 Cruises (I gave Harper 3.5 Cruises when he committed but then he flipped to Oregon sorry I'll stop). So I could see Sparks challenging for a job sooner rather than later.

Both tackle spots will need new starters, and I think both of the 2019 recruits (Kirts and Plohr) will be interior linemen, so this is how that tackle battle shapes up when camp opens in 2021:

Pearl and Slaughter are the most likely starters by then, but there's a chance Sparks or Griffin (or even Wisecarver) would be ready early. Sparks enrolled in January of 2020, so that gives him 18 months with Lou to get his body ready for that training camp battle.

Most likely, Slaughter and Pearl are the starters for 2021 and 2022 and then Sparks gets ready for 2023 and 2024. But, you never know. Especially for an offensive lineman in glasses.

By all accounts, Kevin Tyler was a Plan A recruit. They were going to Wesley, Harper and JSJ as well as Tyler. Tyler was above JSJ and Wesley. Harper is obviously a tier above those three

That's probably true. And if I look at my own rating, I had Tyler as a 3-Cruise recruit which would suggest a Plan A kind of kid.

So maybe it's best to leave Tyler out of it and just say that Sparks should be tracked with Harper and Griffin with JSJ.

I really like this group of young OL. If Blaise, with his accomplishments, the level of competition, his size, work ethic, and enrolling early is this far down on the 90 our depth over the last few years has vastly improved.

Good catch on Tyler, massive get for staff.