I like a good challenge. So even though the Pick My Post thing was just going to be one post and then I extended it to two posts, three seems like a nice clean number, right? Especially when that third post is challenge like this. Let's put my memory to the test.

I don't want this one to be a research post, so in the spirit of Pick My Post (you give me a topic, I try to write it in 45 minutes), I'll try to do this one in 45 minutes as well. I'll pull up the schedule for each season and just let my brain land on a single play. There's a 41% chance my brain will think a play from 2013 actually happened in 2012, so you'll probably have to fact check me, but here goes.

This one seems easy to me. Didn't even have to look at the schedule. Nate Bussey's interception that he tipped to himself and returned for a TD against Penn State. As I recall, it was a pass to the right flat, Bussey was blitzing off the left edge, the QB tried to lob it over him, he jumped, got a hand on it, tipped it in the air, grabbed it, and returned it for six. In one of our bigger road wins of the decade.

This is just going to be a "first play that comes to mind" kind of thing, but when I think back on 2011 (six game winning streak followed by a six game losing streak), I think of the drive at the end of the Northwestern game. Northwestern had just scored to take the lead, we had, like 1:30 on the clock and we needed a touchdown (trailed by 4 I think?), and Nathan Scheelhaase led the team right down the field for the winning touchdown. The play that sticks out (and I want to say it was the first play of the drive maybe?) - this 25-yard (double move?) sideline pass to AJ Jenkins. The crowd was pretty demoralized after the Northwestern go-ahead touchdown (all except for the Northwestern fan seated directly behind me), and that pass play (perfect throw, great catch - as "just like they drew it up" as it gets) breathed life back into everything. AJ Jenkins could run a ROUTE route.

Oof - say "2012" to me and I think of the Arizona State blowout which told us we had no chance whatsoever that season. We went winless in the Big Ten and only won two games overall (one of them against the worst opponent I've ever seen us play - hapless, winless FCS Charleston Southern). So I'm probably going to have to pick a play from a loss.

I think I'm going with the Ashante Williams fumble return for a TD against Ohio State. Ohio State was undefeated and Illinois was 2 and whatever (on our way to 2-10). The line was something like 27 points. So really, the only thing to watch in that game (at Ohio State) was to see if we'd cover. We're not covering, and Ohio State is about to score to put the cover out of reach, and then Ashante Williams scoops up a fumble and goes like 80 yards for the touchdown. Illinois covers!

(Illinois doesn't cover. Ohio State scores with like 45 seconds left and wins by 30.)

For this one I'll go with a group of plays - the goal line stand against Cincinnati. We're leading in the third quarter but Cincy is driving (to tie, I think). They have first and goal inside our five. We stuff them on four plays (including fourth and goal from the one where Earnest Thomas forces a fumble) and that was that. We go 99 yards for a TD and it's game over. So if I have to pick "best single play", it's Earnest Thomas stuffing the Cincy QB at the one on fourth and goal (is that the play where he got injured? Or did I combine two plays in my head?).

You probably think I'm going to say Darius Mosely and The Push. Context-wise, that was the biggest play of the year. Penn State just needs one more first down to basically lock up the win and send us to our seventh loss (and no bowl) and Darius Mosely pushes the receiver blocking him into the QB stretching for the sticks and he goes out of bounds half a yard short. They punt, we drive, Reisner FG, win and bowl hopes still alive.

But that's NOT the play I'm picking. The best single play was Mikey Dudek's TD catch against Iowa. He's running the sideline, Lunt's throw is out of bounds, so Dudek leans back like a window washer hanging off a building and grabs it while keeping his feet in. It might just be the best play on this list.

The bomb to Malik Turner in the Nebraska game. Great play call, great route by Malik to get behind the prevent defense, so-so throw from Lunt (I'm guessing he was thinking "don't you dare overthrow this"), fantastic adjustment by Malik to the ball, great result. When I think of 2015, I think of that play. (And that we were 4-1 and I was totally convinced we were bowling with that incredibly stout defense followed by 1-6 to finish the year.)

I guess I have to go Malik again because best play has to be the Malik Turner spinning catch at Michigan, right? Such great body control. A lot of players make that catch, but not many stay on their feet and score. It was like some floor exercise routine in the Olympics where the player has to complete a 360-degree spin before the next tumble or whatever. But he didn't tumble. He scored. (In a game started by our 3rd-string quarterback which we lost by like 50.)

Two plays come to mind: the Lou Dorsey one-handed reach-back catch and the Bennett Williams' tip-it-to-himself interception in the Northwestern game. That's kind of sad, I guess. The two plays that come to mind are by two players who were dismissed from the team the following season. But those are the two I think of.

I have to pick one so let's go with the Bennett Williams interception. He was on several Freshman All American lists and would pair with Sydney Brown to make the top safety combination in the Big Ten this season had he not been kicked off the team, and that INT showed what kind of skillset he possessed. Read the play, take away the passing angle, reach to tip the pass, grab it out of the air and go.

Reggie Corbin Penn State run. This one is easy. Made, like, 9 players miss. Made that poor safety nearly tear both ACL's and perhaps break both ankles with that final move. That game was so much fun until, well, you know....

This one isn't quite as easy. 4th & Bhebhe was big for the situation (without it we don't bowl), but I don't think it was the "best" play. Tony Adams' interception was probably the single biggest play of the Lovie era, and it was an incredible play - it's designed for the corner on that side to follow the tailback, opening up a lane for the pass to the tight end, but Adams read it and sagged off the tailback to make the play - but I'm not going with that, either. The "best play" was Devon Witherspoon's tackle in the Wisconsin game. I just can't get over how, while tumbling to the ground because he lost his footing, he grabs the foot and wakeboards behind the receiver. (And, also, saves the season.)

Hey, I have a gif of that one. Let's just end with that.

If you pick Witherspoon for last year, you have goo pick Mosely for 2014. Those plays are very similar and the ones that I'll always love.

The way I've always described this play: In the history of football (at least in the history of the football I've watched), when a quarterback throws a ball over the wrong shoulder, a player will try to spin around and look over their left shoulder instead of their right. When someone pulls it off (looks over the other shoulder, still catches it), the announcers ooh and ahh.

Dude K simply invented a new way to catch a wrong-shoulder pass. Lean back and catch it like someone dropped it from the sky behind your head. And then somehow maintain your momentum and tumble into the endzone inside the pylon. 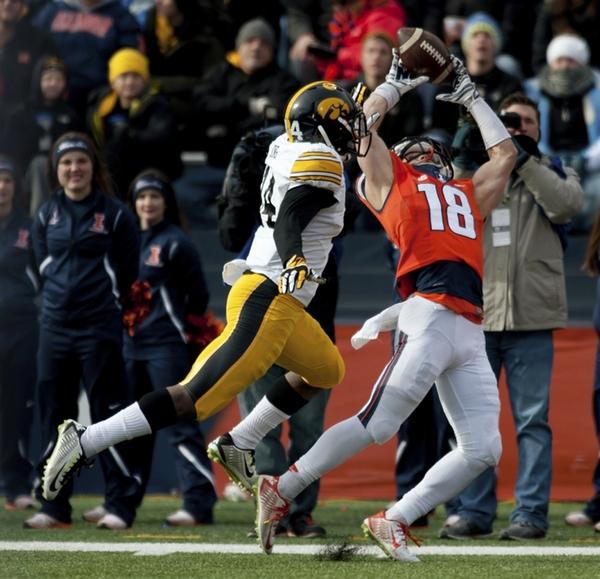 You had the chance to use "Munchie Legaux" in a post and didn't.