I don't spend nearly enough time realizing that Frank Williams' son is on the team. I just searched my Twitter and the first time I tweeted about Da'Monte was February of 2014, so maybe I'm just used to the fact that Frank Williams' son is on the team. But I still feel like I need to remind everyone: Frank Williams - His Royal Frankness, or HRF, as he was called on IlliniBoard back in 2002 - has a son, and that son leads the nation in three point shooting (official stat) and slide-in-from-the-baseline-and-grab-the-rebound rebounds (unofficial stat). We're trying to get back to the Final Four, and the son of one of the top-10 Illini players of all time is going to help us try to get there. I love it so much and I have no idea why we're not constantly talking about it.

OK so that opening paragraph was a mess. But I'm not changing it. My brain is absolute toast right now but I'm pushing through it. I just got back from a quarancation where my wife and I had real, actual human interaction with two other people who are not us. It wasn't much - we couldn't really do anything besides sit around and watch true crime documentaries on Netflix - but it was something other than "my wife and I sit on the couch and watch true crime documentaries on Netflix".

So I'm very tired and very much looking forward to sleeping in my bed for the next 13 hours. But first I want to talk about Da'Monte.

Every great Illini team has a glue guy. Roger Powell was a glue guy. Damir Krupalija was a glue guy. You need that guy who grabs the big rebound and dives on the floor and gets the steal at exactly the right moment. It's great to have stars like Ayo and Kofi but every great team needs a glue guy. I feel like I already wrote this paragraph. Yes I did - it was in the preview. Here's that part of the preview:

Every team needs a glue guy (2005: Roger Powell; 1989: Tyler Cottingham), and Da'Monte is the glue guy for this team. At least one time every game, he's going to have a Glue Guy moment and I'm probably going to just tweet "Glue Guy." Somebody get that Sports Illustrated photographer over here to take that Roger Powell photo again, only this time put the glue on Da'Monte's fingers.

Thing is, though - he's more than a glue guy this year. He's a sharpshooter. He's on this hot streak like you've never seen a hot streak and now he leads the nation in three point percentage 40% of the way through the season. He's not a glue guy he's, like, a hot glue gun.

Wait, did I just give Da'Monte a nickname?

Tonight, with Ayo not scoring in the second half and finishing with 12 for the game, we needed someone else to pick up the slack. And we landed on Hot Glue Gun to shoot us (3-5 from three) and rebound us (seven second-half rebounds, 10 for the game) to a win.

It wasn't all HGG, of course - Andre Curbelo was huge, and Kofi had 14 and 10 - but my takeaway from this game was that Da'Monte was the difference. Ayo was off, Trent was quiet, Giorgi didn't score, but Da'Monte and the freshmen helped pull out the win.

I tweeted this chart, but I'll link it here as well. I sorted the stats just for second half rebounds. See if you can spot the 6'-3" guy: 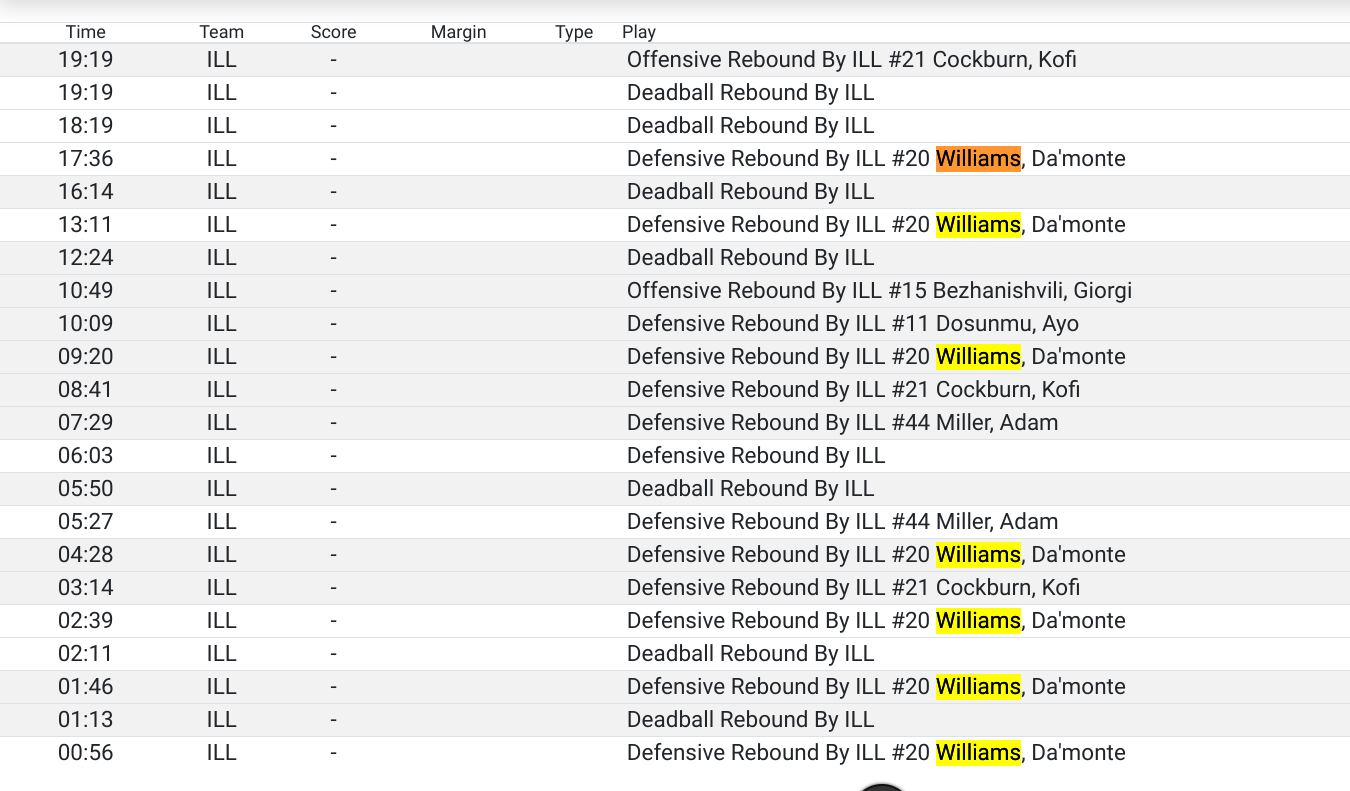 OK, I'm getting really tired now, so I'm gonna rapid fire a list of other thoughts in my head:

OK, so now I'm basically asleep. I shall wrap it up.

4-1 in the Big Ten with three winnable games against Northwestern, Maryland, and Nebraska before Ohio State comes to town two weeks from today. Then, after a home game against Penn State, the stretch that will likely decide if we will win the Big Ten: at Michigan State, home for Iowa, at Indiana, home for Wisconsin, at Michigan.

What’s great about this team for me is I “like” the players. Sounds awful but there have been teams that I was rooting for players, team but something was missing? HGG, Trent, Ayo, Kofi, Giorgi much love. The freshmen are/will be incredible. Every time HGG hits a three it’s so much more than 3 points on the board for me, it just means more. Could be his dad’s few words many years ago that he wouldn’t even remember still are part of my OB blood.

What DMW is doing is so remarkable given he was afraid to shoot and wouldn't shoot until fairly late in the 2019-2020 season. Having Kofi and Ayo means lots of open looks and he's knocking them down at a historic rate.

Hawkins is a very intriguing prospect with the multiple skills he brings to the table. Great find by BU.

Truly remarkable 3FG% before and after:

apologies for appearing to take any thunder away from HGG but we finally got a glimpse into what Miller brings to this team when he has his confidence (I suppose the first was against inferior opponents at the start of the season). If the other high minute players do what they are expected to do this team will still need Miller to show up to win the really big games. I think BU's response after the game why Curbelo isn't starting speaks to this. With his confidence restored (lord I hope it is), Miller will be a huge part to this team accomplishing what we believe it can.

Even though Kofi and the upperclassmen will carry the team, the freshmen will determine how deep we go in March - two months to get ready. I'm glad that they're preparing against the best. Gonzaga is preparing against Pacific.

I really really really hope that the school can figure out some way to get people into the SFC for a game by March (rapid test 2000 Krush members the morning of a game and keep them 100 feet from the floor?), so the Damonte can get the thunderous Senior Day send off he deserves.

He and Trent will get the thunderous Senior Day send off they deserve. In March 2022.