This is part two of me turning an email into a full-on mailbag post. But you don't want to read the first part. I already hate the first part. I took the question "what has surprised you the most since going full-time" and turned it into some long old-man rant about kids stealing packs of gum from my bodega.

For this one, I promise, no old-man rants. Probably.

You had high expectations going in to 2019, as noted with your October 12 date. Are your expectations higher for 2021 than they were for 2019? ~Aaron

But I kind of feel like the two teams are similar in January. In January 2019 I was all "you know, I know we were just blown out by Iowa two games ago, but I can see this team having a CLICK moment very soon". In January 2021, I'm all "you know, with nine senior starters returning to school (to join 8 other returning starters), what was going to be a rebuilding year is now 'another shot at 2020' and with a line as experienced as ours plus several great tailbacks, I could see this team having a CLICK moment".

In the end, I don't think I'll be predicting seven wins, so I think I'll say that my expectations were higher for 2019. And yes, part of that was October 12, 2019 and my long-awaited MOMENT. It's hard to say we'll have a moment in the first year of a new coaching staff.

What sport, outside of football and basketball, should us Illini fans be paying attention to this season? And why? ~Mason

I was surprised to see that volleyball wasn't ranked in the top-25. And I was really surprised at this: 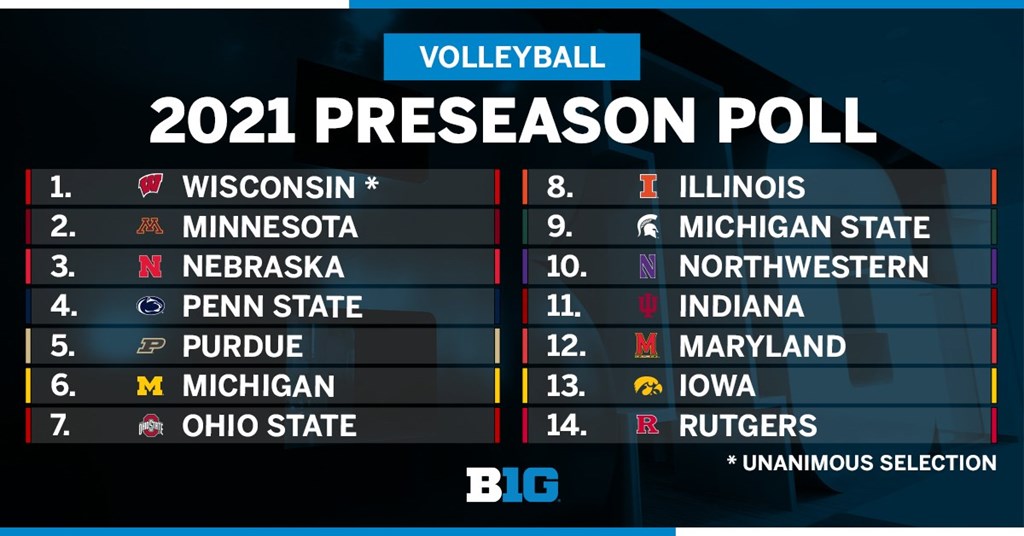 When is the last time Illinois volleyball was picked in the bottom half of the Big Ten?

I was also thinking that maybe wrestling should be the answer. Started out the season unranked in one poll and 22nd in another, and now after dual wins over Indiana, #8 Ohio State, #22 Wisconsin, and #13 Purdue (tonight), Illinois is in the top-10. As the father of two sons who wrestled all four years in high school, I really need to cover a wrestling match this year. I've spent many a day screaming "TWO!" in a sweltering gym on a cold February weekend.

But I really do think my answer is men's golf. Last year, Illinois fell out of the top-25. The streak of 12 consecutive NCAA Championship appearances was in serious jeopardy. The Big Ten streak was in danger as well - Illinois was 34th in the Sagarin Rankings last year and Northwestern was 38th, so winning yet another Big Ten title wasn't as much of a lock as it has been in the past. Covid never let us find out.

So if Mike Small can find five consistent guys (my guess - Feagles, Tadiotto, Ji, ADdC, and Lang), he can keep those Big Ten and NCAA's streaks alive.

What's the trajectory for the site? What's the ideal to be achieved 5-10 years from now? ~Heath

I don't think I can answer that because I don't know. I never really planned out any of this. I asked a friend to set me up with a website in the fall of 2008 and in 2009 I started writing in the evenings after my wife and kids went to bed. I now live in Champaign and am no longer a Landscape Architect. And I didn't really plan any of that. Perhaps I should do that now that my income comes from these words, but I'm not sure I'd really know how to do it.

Along the way, I came to realize that so much of the coverage of Illini athletics can be prefaced with "the fans will really like it if I say _____". It feels like it's manufactured in a facility somewhere, these headlines asking for your dollars. So I've made this over-the-top effort to simply say what's on my mind, even if, in the short-term, it loses me followers and subscribers. It's no great surprise to me that the trickle of daily subscriptions stopped cold after the harsh words I shared post-Maryland basketball loss. I've been doing this long enough to know that if I were to say "everything is fine HERE'S WHY", people would be much more interested.

Same with going negative when the fans thirst for it. Believe me, there is cash to be made right now if you claim that Lovie was lazy and never cared about recruiting. From my view, that wasn't the case, and when I say that I get screams of "LOVIE LOVER!" and tomatoes thrown at my face, but I'm telling you, I don't think that was the case. He had other faults, and those faults cost him his job, but I can't jump on the "Lovie barely tried" train. It's just not what I observed.

So my answer to "what's the trajectory for the site", to me, has very little to do with "I hope to have more writers on the staff" and much more to do with "these need to be the guiding principles". I want to tell you what I see from up close, even if it's positive when you want a coach put on blast or negative when you want to celebrate our awesomeness. I believe that "the fans will like it if I say _____" earns you short-term success but being honest about what you see is the key to long-term success.

Oh, and I also want to do more recruiting stuff. Not "Nelson rates Illini visit a 10" or anything like that, but analyze recruiting info more.

First, I'm probably going to get hung up on "tandems". Deron, Dee, and Luther were a trio. Does that mean they're disqualified from a "tandem"? Or should I just say "Deron and Dee"? But if I say that, what's wrong with "Dee and Luther"? Of course, nobody ever says Dee and Luther.

So I think I'll get out of that by assuming that you mean "an inside guy and an outside guy". 2006 Dee & Augie was a true tandem (just like Ayo and Kofi). Brandon Paul & DJ Richardson were just two guards who came in together and graduated together.

That opens up all kinds of difficulties as well, though. 1989 didn't really have a tandem. I guess you could say "Nick Anderson and Kenny Battle", but that leaves out Kendall Gill. 2005 was a five-headed monster, but 2006 was tandem-central with Dee and Augie. So please forgive me for just sticking with "an inside-outside combo similar to Ayo and Kofi".

I still have this massive soft spot for Ken Norman and Tony Wysinger in 1987, and I'd love to be able to squeeze in my fond memories of Turner-Gee or even McCamey-Davis, but I think that's my top six. And 14 year-old me won't ever let anyone move Bruce & Efrem from the top spot.

Bruce Douglas and Efrem Winters: that is correct.

I have a program signed by them as well as Don Freeman, Jim Vopicka, Bogey Redmon and others when I was 10. Bob Griese also signed it (he was on the Purdue basketball team at the time).

What, no Rick Mount signature?

I think I did ( I would have to dig into the basement to find the box it is in) but I remember Dave Schellhase (NCAA scoring leadingin 1966). Preston Pearson was on the Illini bball team and I got his also. I don't think he even played football at Illinois, but had some success with the Cowboys

Actually I got Rick Mounts later. Schellhase was the man in 1965.

Very cool. Another player of some note for Illinois during that era was Bill Small, the father of the U of I men's golf team coach. Danville native I believe.

I agree with Bruce Douglas and Efrem Winters... And amazing that there is so many good combos (let alone trios) that Kiwane and Deon are at #6!

But for 1/2 of that combo.. there has NEVER been an inside presence (size) like Kofi Cockburn... and it would be amazing if they figured things out in time to move even higher on this list....

What a list! Bruce and Efrem for me. If looking at effort, working together, protecting home court, and actual overall results, I don’t think our current duo measures up. Both great college players but do either make the other better? Let’s hope things change a little, deep tourney run, and I’ll eat crow.

Agree completely with Bruce and Efrem. Kiwane Garris & Deon Thomas had played together for more years, they might be higher on the list.

In terms of future content, we all have a pretty good idea of your take on what is required to build a men's football and men's basketball "program", would be interesting to hear your perspective on Illinois' ability to build a program in the other sports that we have either sustained, momentary or limited/no success in (e.g., women's volleyball, men's golf, women's basketball, men's tennis, men's wrestling, men's baseball, women's softball, track) -- what is the recipe for success in those sports and how close/often has Illinois come to achieving that recipe. As an Illini fan who lives thousands of miles away, I certainly enjoy the comprehensive coverage that the marquee sports enjoy, but I'm always a little curious about what else is going on in our athletic program; and like you, I always like to see former Illini of any team do well when they become professionals in their chosen endeavors.

In terms of basketball, it would be interesting to see your list for "trios" as well - Harper/Johnson/Smith come to mind as a potential top 5 listing there.