I've been waiting for this day. The day where the NET rankings come out. As you probably know, NET replaced the RPI several years ago as the "official" rankings that the Committee looks at. It doesn't matter if a team is ranked 14th in the AP Poll - what matters to the seeding committee is the NET.

But they're usually interpreted incorrectly. On Selection Sunday, there will be a team ranked 8th in the NET but that team will get a 4-seed. And that fanbase will scream "8th should be on the 2-seed line and we're a FOUR?", and the talking heads will have to explain again that the NET rankings are viewed in the inverse. They're used, somewhat, so say "this is the 8th-best team", but they're mostly used to say "who did this team beat/lose to?". How good was your schedule?

It will then inevitably come out that the team that climbed to 8th in the NET rankings fell to a four seed because (for example) their best wins were at home and they didn't really have any high-end road wins (while the team that was 15th in the NET got a 2-seed because they were 6-3 in Quad 1 games including three massive road wins). So it doesn't exactly tell you who you are - it tells you who you beat.

Now, it also tells you who you are, of course. No team that has zero Quad 1 or Quad 2 wins will be top-5 in the rankings. And the whole idea behind switching to NET in 2018 and dumping the RPI was to get a more KenPom-y kind of ranking which included efficiency margins and such. So the committee does look at where you're ranked in the NET (much more than they did with the RPI). It's just that they'll look at your entire resume and if your "quad" wins and losses are bad, you're dropping from where you're ranked.

If you want to know what goes into the formula (which was just tweaked in May after three seasons using a slightly different formula), the NCAA made this very nice infographic for you: 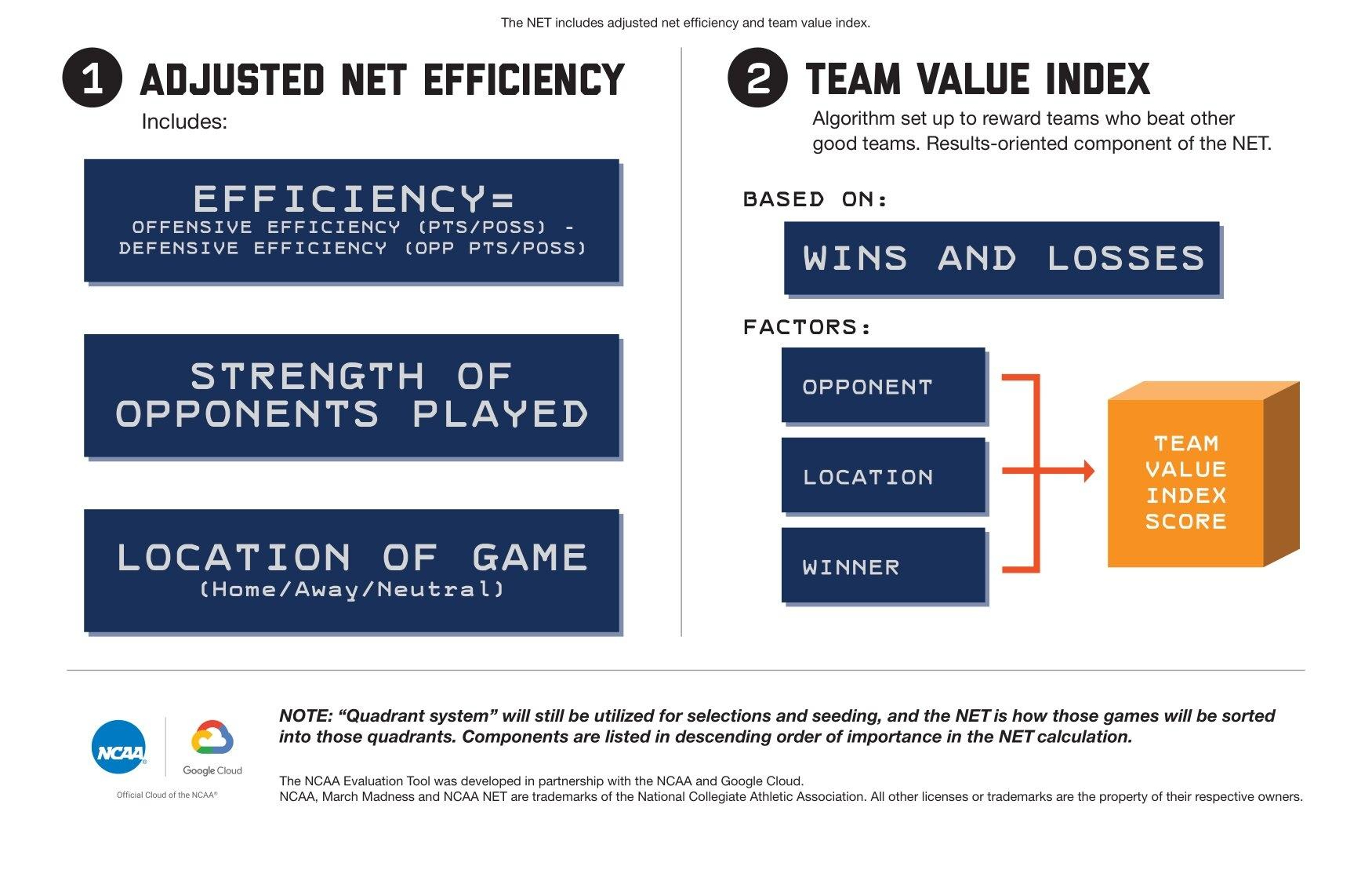 The NCAA then takes those rankings and splits your wins and losses into four quadrants:

Clear as mud? Good. Let's get to the first NET Rankings which were released 30 minutes ago.

Obviously, these will change a lot. Just going through the top-20, you can see that a lot of the early rankings are "teams that played a tough non-conference schedule". Missouri playing Oregon, Illinois, and Tennessee is going to push them up towards the top (and so forth). And Illinois probably has the best losses of any team in the country: neutral loss to #2, road loss to #10, road loss to #17.

They haven't filled out the quadrant info yet (maybe by the time you read this the link will show that they have, but for now it's just a bunch of dashes). However, this is why I no longer have a job, so here's where we stand in each Quad.

Disclaimer paragraph immediately following a disclaimer paragraph: these rankings will not stay like this. A road win at Northwestern might look like a Quad 1 win now but could be a Quad 2 win by the time the season is over. Duke and Ohio might climb above #75 and that would mean a Quad 2 home win and a Quad 1 road win. This is just "as of today".

All of that won't hold, of course. But if it holds in the same general categories (Ohio State drops three spots and a home game against them is Quad 2, not Quad 1 but Maryland climbs three spots and that's now Quad 1), then we've arrived at the big takeaway from this NET rankings release. Are you ready?

What does that mean? It means what we've thought all along: this is a schedule that can get us to a one-seed or a two-seed. With both Baylor and Missouri in the top 10, a road loss to #10 and a neutral loss to #2 are the kind of games the committee looks at and says "well, nobody was going to win that game". "Good losses", if there is such a thing.

I don't want to go much further down that road - Missouri might be #47 by February 1 - but that's where this stands as of today. We have three losses but are still #4 in the rankings. The schedule is shortened this year (only 26 games, and that's if all of them are played) but we still have 13, maybe as many as 15, opportunities for Quad 1 wins. It's all there for the taking.

I have two questions about the NET. Is the quad determined when you beat the team or on selection Sunday? Second, does it matter how badly you beat or lost at the time you played them.

The quad is determined right before selection Sunday, that's why Robert was saying the Duke win could change to a quad 1 victory. As for your second question, I think it does matter, but not a whole lot.

Here's the team sheet for Illinois last year. This is all the data that the committee looks at when determining seeding. Each team has a sheet exactly like this. 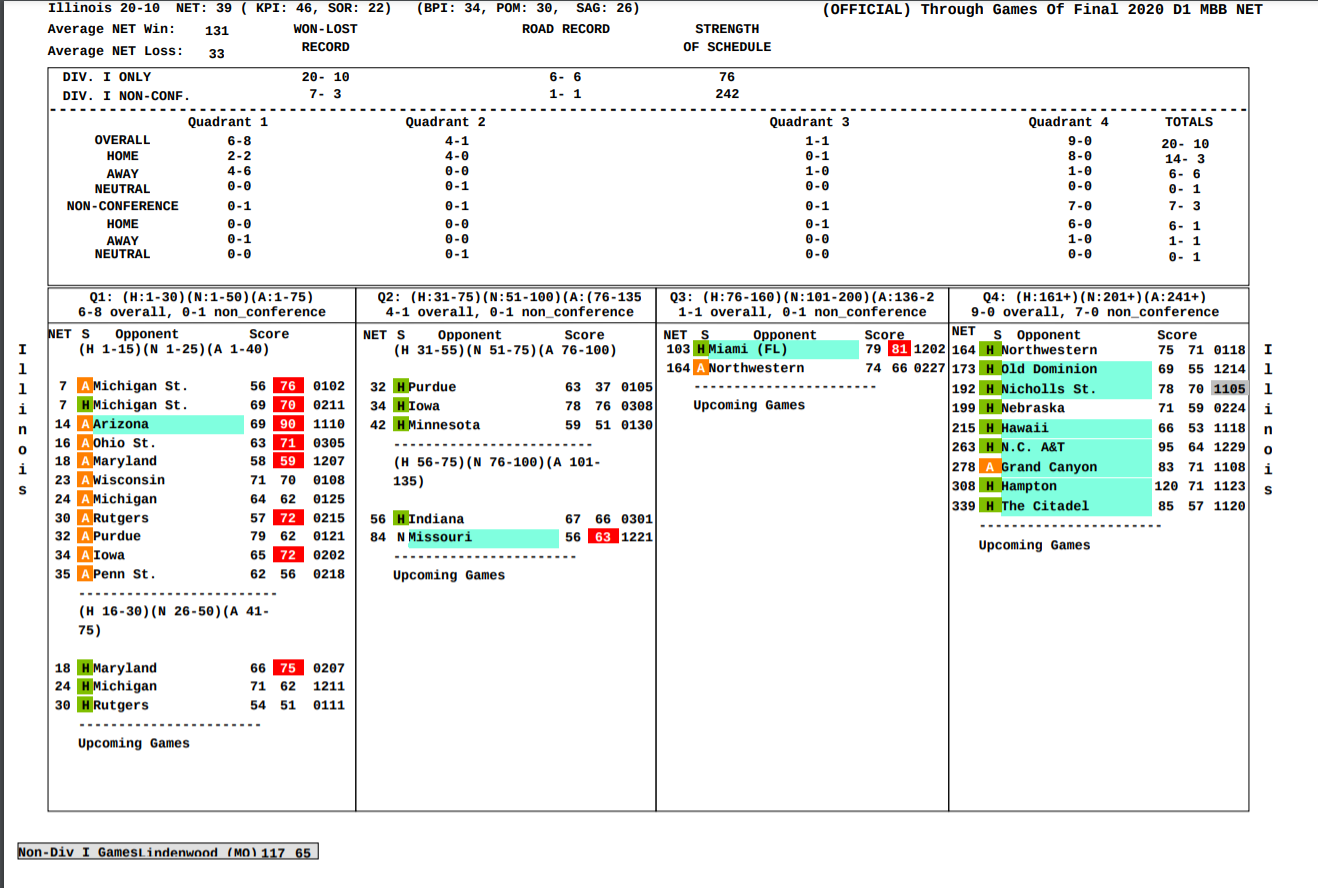 I'm curious whether they tweaked the weighting of road wins/losses this season considering that most games will be played with no fans in the stands.

I don't believe so. The tweaks were made in May and no changes to the formula have been announced since then. In May no one knew the fan situation for the winter.