Mind is clear this afternoon. Clearer, at least. I wrote something last night and tossed it in the trash. Tried again this morning. Trash. Maybe I should keep a collection of these things I write that I won't let you see. Turn them into a worst-selling book.

Football is changing (has changed?). Take the play right there in Holly's (fantastic) photo. Khalan Tolson is trying to prevent a first down. To keep the tailback's momentum from carrying him over the 35 yard-line where he'd pick up the first down - Tolson had to toss him backwards. It was a play that would make Dick Butkus proud. Hell, it was a play that would make Jerry Schumacher proud. In both of their days, it was part of football.

But it's different now. Intent is assumed. Tolson must have been slamming the tiny tailback to the ground for the 'Gram. Whistle, flag, 15 yards for unnecessary roughness.

Except it was completely necessary. The only way to prevent the first down was to get him on the ground laterally. I'll just link a gif real quick and then we can talk about it.

I'll do a quick screencap from that: 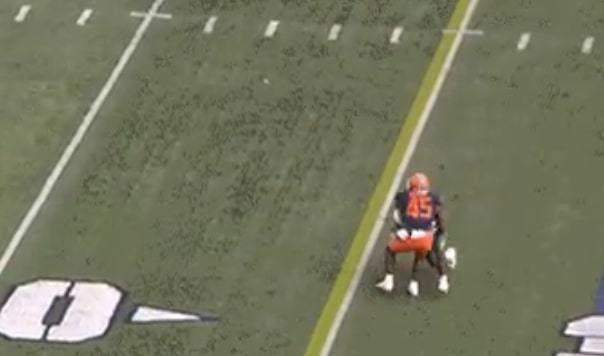 There's no way, at that moment, from that angle, for Khalan Tolson to prevent the first down other than to do what he did. It was a great play. The call was "unnecessary roughness" and this was literally necessary roughness. That call is in the official's arsenal to help clean up "he didn't have to do that, but he did it anyway just to cause pain" plays. Here, he had to do that.

Why was it flagged? Because officials have, in my opinion, made the switch to "just assume that's what he was trying to do". If a defensive lineman is trying to bat down a pass and his hand hits the quarterback's helmet, just assume he was faking like he was trying to bat down the pass so that he could strike the QB in the helmet. If you see a thing happen, assume it was intentional and flag it. The core issue, in my view: an over-emphasis on "what it means". (Which, I guess, is everywhere in society these days.)

For football, it feels wrong. I get that it's there to clean up some of the violence. Watch a video of some of the head-hunting in the 1970's and yes, football needed to adapt. Go find the entire Check The Tape I did on Ohio State head-hunting Eddie McGee ten years ago. All of that "my teammates have him held upright so I get a free shot at his facemask" stuff had to go.

And yes, there have been incidents of "he didn't have to body slam him, but he did it anyway just for emphasis". Again, I understand why the rule is in the book. But in this very specific instance, it was the necessary move to prevent the first down. The ballcarrier ducks into his chest and still has his feet underneath him. You won't have the leverage to get on top of him to bring him down because he can drive forward for the first down. Your task is to remove that leverage (get him to the ground), and to remove that leverage, the only path to the ground that doesn't get him across the 35 yard line is up and over. Incredible play.

+ Speaking of football, this was a fairly clinical football game. One of those "do these things and eventually you're going to win" games. Control the clock, ESTABLISH IT, and win.

In an ESTABLISH IT game, here's what can ruin everything:

Let's see how we did:

When you do that, and you win the TOP 34-26, and the rushing yards are 336-72, it's so difficult for a team to pass their way out of that stranglehold. Chris Reynolds was 17 for 23 for 191 and two touchdowns but it didn't really matter. Charlotte was limited to eight total possessions - a collegiate game of keep-away - and once their lack of defensive depth started to show, this game was over.

Next up - try to do that against Wisconsin themselves (and their 2021 blueprint "can we maybe try to win games 6-3?").

But here's the two key plays in my mind:

1. Charlotte gets the ball to start the second half but they only reach midfield before having to punt. It's a good punt which pins Illinois at the six. After one first down, Illinois is faced with third and nine at the 17. Fail to pick this up and Blake Hayes will be standing inside his own five to punt. Brandon Peters hits Casey Washington near the sideline but Washington is one yard short. There's two defensive backs fighting for the tackle, but Washington fights them off and gets one more yard for the first down. After an incomplete pass on the next play, the Illini offense goes 10-yard Brown run, 13-yard pass play to Isaiah Williams, 20-yard run from Brown, and then 31-yard touchdown from Brown. 17-14 Illini.

As someone responded when I tweeted about Washington fighting for the first down, STRAIN.

2. Charlotte gets the ball back and is driving again, helped by the worst 15-yard unnecessary roughness penalty in history. They get to the Illinois eight before a really weird "fake two things and then hand it off" play loses four yards. Third and goal from the 12, the tight end is open, but Kerby Joseph reads the quarterback (just like he did at Purdue) and knocks down the pass. Charlotte has to settle for a 29-yard field goal attempt, which they miss. The very next play Chase Brown goes 80 yards and the game is essentially over given the way the offense was eating clock and the defense was getting to the QB.

+ In the first half it occurred to me that so much of this is next year's defense. Let's just go through the starters on D.

With Jake Hansen out, the linebackers were Khalan Tolson (JR) and Tarique Barnes (SO). Both return next season, as does Calvin Hart.

With Devon Witherspoon (SO) out, the cornerbacks were Tony Adams (SR) and Taz Nicholson (FR). So next year seems like it will be Witherspoon and Nicholson.

And the safety rotation in this 4-2-5 we've been playing: Quan Martin (JR), Sydney Brown (JR), and Kerby Joseph (JR).

So really, as of right now, it seems like there's one starting spot available for next season: Owen Carney's spot. We pretty much know the starters at every other position.

+ On to Wisconsin. Let me just start by saying that this will not be a game where we rush for 336 yards. Charlotte's defense on SP+: 123rd out of 130 teams. Wisconsin's defense: 3rd.

Points will probably be at a premium. If you go by scoring offense, Illinois is 109th nationally and Wisconsin is 116th. Maybe my 6-3 joke above really wasn't a joke.