My Internet is down. No, not because Facebook and Instagram were down yesterday. Utility workers chopped through the ol' cable that brings the world wide internet into my house. So I'm on hour 25 of hotspotting my phone.

I have a basketball podcast nearly ready to go, but downloading and uploading a 250 gb file takes forever when I'm running the WWI through my phone. I should be Checking The Tape right now, but phone internet isn't enough to stream the game in high-enough quality to make gifs and screencaps. I did go work at a cafe yesterday, but cafe wifi is sometimes worse than hotspot wifi. And I'm not bringing my podcast mic to a cafe and becoming that guy.

It's weird that there's no ramifications for the utility workers, right? I mean, you can just chop right through all of the underground utilities and then someone else has to come out and repair them. Maybe you want to mark the water, gas, and sewer lines (those make a MESS), but chopping through electric or data? Who cares! They tried to splice it (didn't work) and moved on.

Anyway, that's my last 25 hours. But that's not the point of this post. This is Pick My Post. And since three of the answers to my tweet were so similar (and all came in with 18 seconds of each other)... 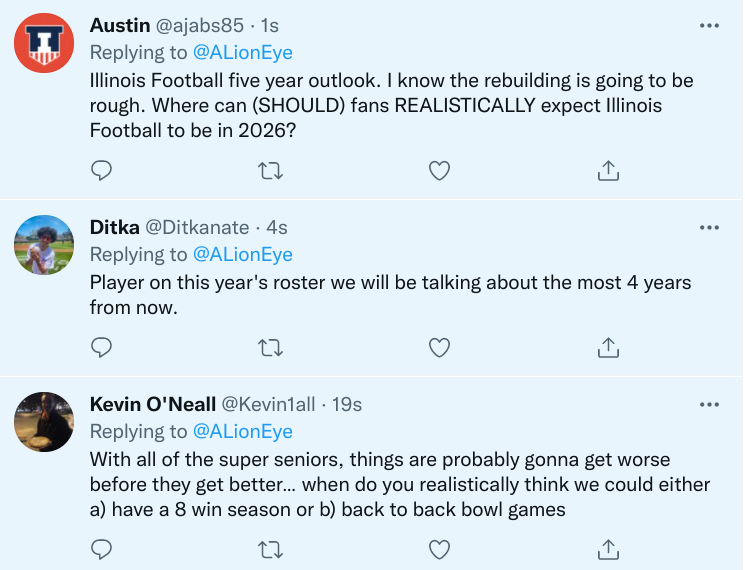 Let's start with "things are probably gonna get worse before they get better". I covered this on Sunday, but here's the starting defense from Saturday:

Four freshmen, one sophomore (might have been two if Calvin Hart wasn't injured), four juniors, and two seniors. Yes, those four juniors are supposed to be seniors, so some of those guys might be gone after this season, but overall, there are three senior starters right now (Carney, Hansen, and Adams) and Hansen is injured.

I'm not saying that next season will be a step forward. Need to find a QB, replace most of the offensive line, and replace defensive anchors like Carney, Hansen, and Adams. Plus the kicker, punter, and longsnapper are all gone.

I'm saying that it doesn't exactly appear like it did in August. Perry, Gay, and Woods have been replaced as starters by three freshmen on the defensive line. Injuries to Hansen, Epstein, and Jeresaty have opened up snaps for underclassmen. It's a lot less "wow, everyone leaves after this season" than it appeared eight weeks ago.

So now let's get to the other questions. Let's go two paragraphs on each:

Player on this year's roster we'll be talking about the most 4 years from now.

First off, does four years mean 2025? Because then I'd have to either pick one of the recruits in the 2022 class or one of the freshmen who is currently redshirting. I'm going to make the assumption that this means "year four" for Bielema. And I'll throw a curveball and not say Josh McCray (or Randolph or Newton or Coleman).

Pat Bryant is my answer. Mostly because he can levitate (h/t to the guy on Slack who pointed me to this photo): 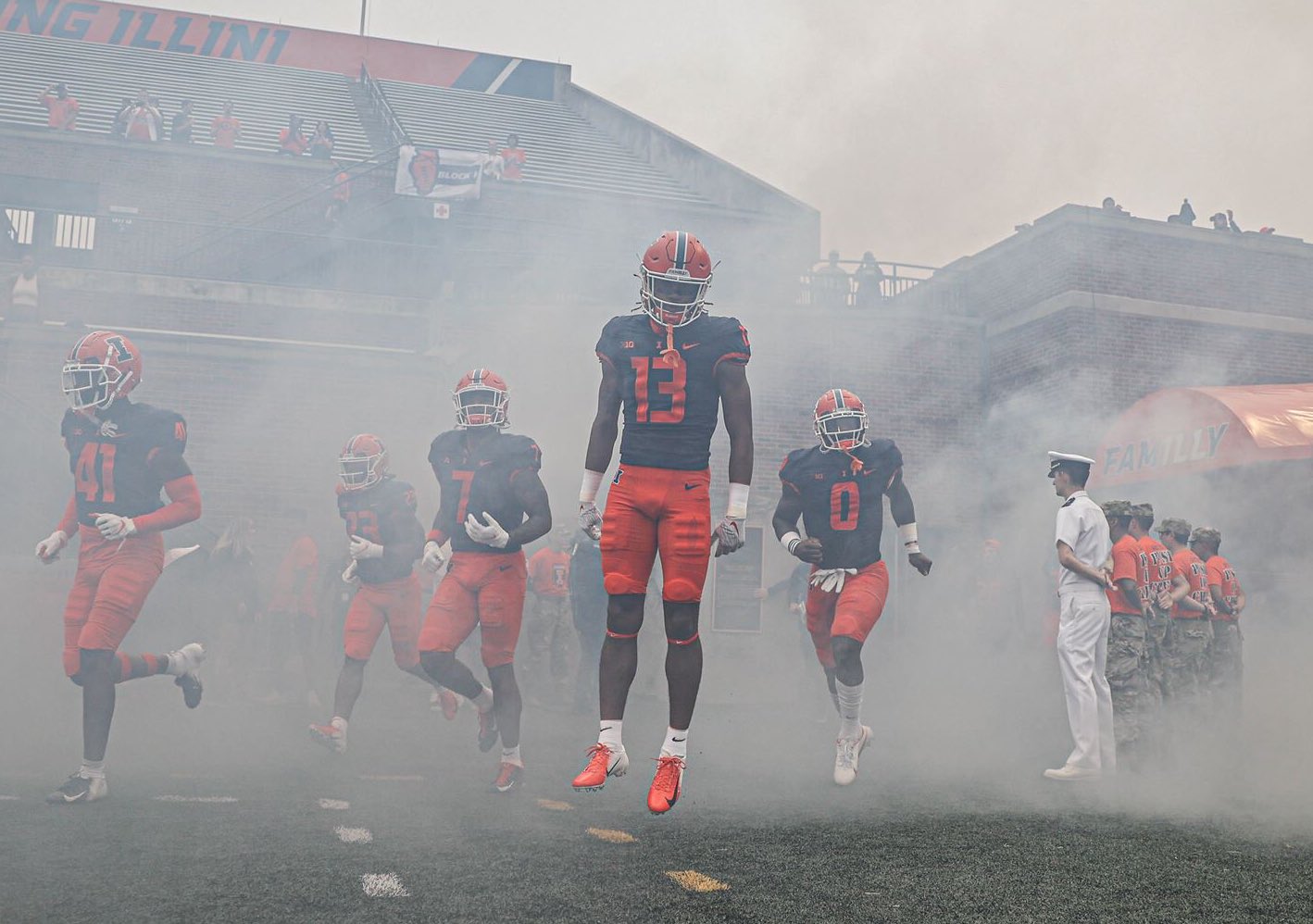 When do you realistically think we could either a) have an eight-win season or b) back-to-back bowl games?

Ah yes, the eight-win season. Remember that thing I used to write about how Illinois, Wake Forest, and Colorado were the only three P5 schools without at least one Sweet Sixteen or at least one 8-win football season since 2009? Just had to look up the last time I tweeted about it and update it. I've thought about it 50 times since the Loyola loss - today will be the day that I tweet about it:

I've been holding off saying this because it's just so painful but that stat I've been tracking since 2009 and have tweeted a dozen times? How every other P5 program has had either an 8-win football season or a Sweet 16 basketball season since 2009?

OK, just had to spend 45 minutes with the repair guy. We're close. But that whole "I'll have this Pick My Post written in an hour" is... not close.

I set the bar at eight regular season wins because 8-4 - which will be either 9-4 or 8-5 after the bowl game - feels like a "major" bowl. Same feeling as making the second weekend for basketball. "Now these are the games that matter."

But that doesn't have anything to do with this question. The question is "when will we get there?" and that's hard to answer. I'll just answer the "should" side of things.

But none of those rebuilds were builds. They were "by year 3-4 you can get to a bowl" but no programs were built. We want a program.

Bret Bielema has one thing working against him (because of the pandemic + the new early signing day he didn't get the job until three days after signing day in December of 2020), but he also has something working for him: the transfer portal. Not just the portal, but starting this season, transfers no longer have to sit out. You don't have to just chase grad transfers anymore. Now, any player in the portal can help you immediately the next season.

Say that to Ron Turner, Ron Zook, Tim Beckman, or even Lovie Smith and they'd tell you that's a game-changer. You lose five seniors out of the top 7 offensive linemen and you're not sure you trust the other linemen the previous coach left you? You can immediately go out and find the two tackles you want - backups at Georgia and Oklahoma who want to get on the field - and put them in your lineup next season. That accelerates any rebuilding process.

Specific to this roster, as of right now, given the stats we talked about above, next year is "re-tool the offense" and then 2023 is "re-tool the defense". A lot can change - like I said above, some of these "juniors who are really seniors" on defense might leave after this season - but from what we're seeing right now, the D could be better next season. But then 2023 is when it needs to be reconfigured.

Where should fans realistically expect Illinois football to be in 2026?

I'll do this blind. My very first thought is "get to where Dave Clawson has Wake Forest" right now. So let's just take Clawson's seasons and put them with Bielema's year one, year two, and so on. It would look like this:

That's a proper rebuild of a destitute program. This number is a bit thrown off by Wake only playing nine games last season, but I think realistic expectations would be "Year Three through Year Seven, average 6.8 wins over those five seasons". Feels like that's perfectly realistic.

And I'm satisfied where 2026 lands on that list. If that's Bret Bielema's second eight-win season (except this time it's eight regular season wins), we will have reached the point I expect him to reach. Bielema was fired at Arkansas for going 29-34 over five seasons. Dave Clawson was 40-45 in his first seven seasons at Wake Forest and he's viewed as a conquering hero.

OK, gotta go. Internet is BACK. Time to check some tape.

I’m concerned about losing “The Lads” after this year. On bad teams, those guys are critical. Are there good replacements in the wings?

Caleb Griffin should be a solid replacement at K.

Got another Aussie to punt, but it will be hard for Hugh Robertson to be as good as Blake.

No idea at LS

I’m concerned about losing “The Lads” after this year. On bad teams, those guys are critical. Are there good replacements in the wings?

Tolson, maybe its his dad's post on Rivals his freshman year when he wasn't playing, but I would guess that Hart and Barnes are penciled in as starters next year, and Tolson has no interest in being third in a two man race. I hope i am wrong because he is a good football player and would hate to lose him.