There were several questions on our Slack which were too long to answer on Slack, so maybe I'll do two quick mailbag posts here. This first one will be two long answers to two football questions and then I'll sneak in a Gustav Mahler question at the end.

Come for the Deuce Spann, stay for Mahler 2.

I think this might be the most excited I've been going into an off-season since 2010 ( that Baylor game really got me believing in where that team was headed... and it was right for at least 6 games). The Beckman and Lovie bowl games always had the sense it was only smoke and mirrors that got us to that point. But this... this feels like meaningful, floor raising, momentum.

I guess this one wasn't really a question. Nick just put an "@Robert" at the beginning so we could discuss it. And now I'm going to discuss it over here.

My first thought is the thing I said on the Sunday No Huddle on WCIA Sunday night. Here's the tweet that links to that:

WATCH: On the final Sunday No Huddle of the season, @WCIA3Marlee and @ALionEye are breaking down the significance of Illinois' win over Northwestern, recapping Bret Bielema's first year, and looking ahead to an eventful offseason: https://t.co/95Uh06iQDE

I'm gonna see if I can do this from memory here. Since 2000, the final game of the season:

That reminds me. Remember that time Jack Trudeau was interviewing Indiana coach Kevin Wilson on the radio in Indianapolis and Trudeau needled Wilson a bit and Wilson got all butthurt and referenced putting up 60 on Illinois when he was the Northwestern OC in 2000? That was fun. Let me see if I can find the story.

Here's a link. Trudeau opened the interview with the IU fight song and made a "I don't remember hearing that fight song much when we played Indiana" joke and then Wilson got all mad and talked about 60-balling Illinois in 2000 (15 years after Trudeau had graduated). So few people hate us that it's good to have a coach out there who really does hate us. Someone needs to reference this when we play Ohio State again (he's the OC there now).

Anyway, I think part of the reason this feels so good is that we've only had three other seasons since 2000 where we went into the offseason with a win. We beat Northwestern in 2014 and 2011 and 2010 and 2007 but all those years we went to a bowl so Northwestern wasn't our final game. It's also worth noting that in 2010 and 2011 might have finished with a bowl win but we lost our season finale - in 2010 at Fresno State and in 2011 at Minnesota. Both years were "let's improve our bowl status" and both years we lost.

If Northwestern didn't have that fluky Covid year last year, their SP+ trend line would be in four consecutive years of decline: 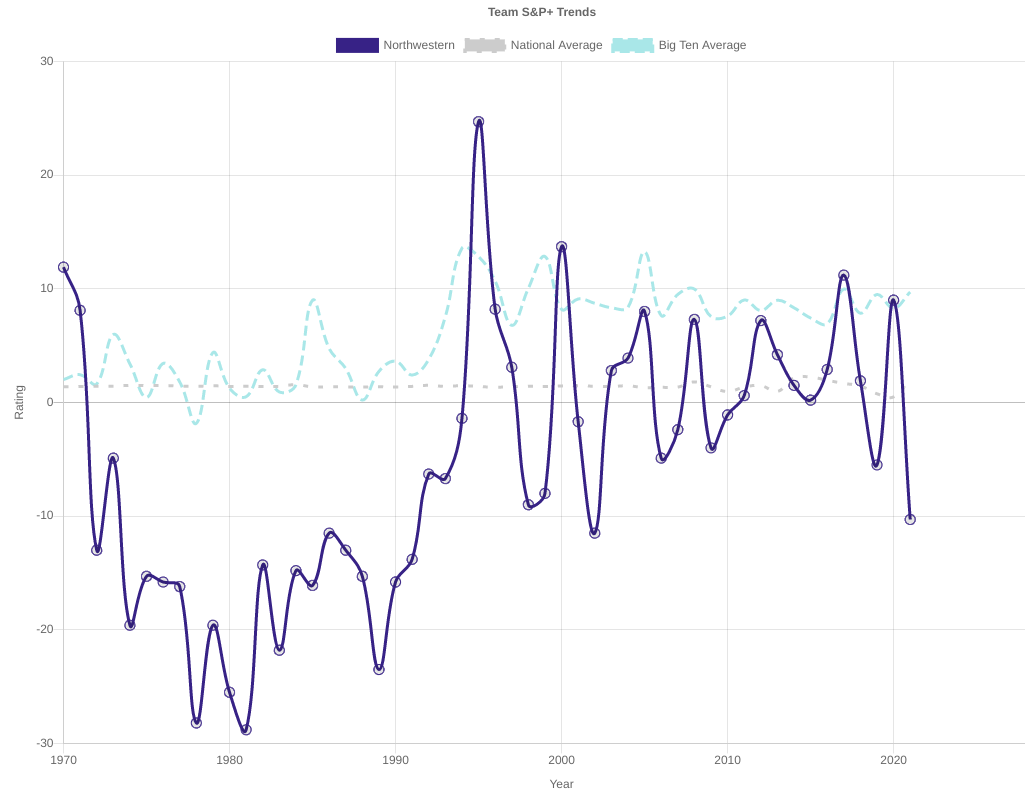 Northwestern's second-worst season of the last 30 years. And perhaps no trampoline rebound this time?

Anyway, yes, this feels like momentum. There are trip wires on the horizon - what if three of this season's Illini defensive stars just decide to portal their way to some top-10 program next season? - but as of now, the looming cliff of 2022 appears to just be a curb.

Stay away from it, Brandon Lloyd.

Who were the biggest surprises this season roster wise? Joseph's rise, no Hightower, LB play despite losing (arguably) 2 best LBs?

Feels like the best way for me to do this is to go through my 90 Illini list. Those were my personal expectations for each player, so who surprised and who disappointed? And I'll make myself do this without using Deuce Spann because my first answer would probably be DID YOU SEE DEUCE SPANN IN THE NEBRASKA GAME??

Other than situational stuff, I'm guessing McCray enters at the back of the line. I think Chase Brown and Mike Epstein will be the two main tailbacks again, and I think ECU transfer Chase Hayden and second-year tailback Reggie Love III will battle for the third-most carries. If there's a fifth tailback to get carries, it's a battle between Kyron Cumby and Jakari Norwood. So that puts McCray in the back row with Nick Fedanzo, trying to work his way into the rotation.

And then he's 15th in the Big Ten in rushing. Think about that. There are 14 teams in the Big Ten. His teammate Chase Brown was ahead of him, plus Michigan (Corum and Haskins), Wisconsin (Allen and Mellusi), and Minnesota (Irving and Thomas) had two guys ahead of him. That means McCray had more rushing yards than any single running back at Penn State, Nebraska, or Purdue.

I should probably also include Casey Washington here, but since I'm doing this based on The 90 Illini, I can't really include him since I didn't have Washington on my list. By the time he transferred back from Wake Forest the list was already too far along to include him.

OK, let's do the biggest disappointments. And I was going to do a 1-2-3 list again but I don't think that works. All would be related to one thing: the passing game.

I had Brandon Peters #2 on the list plus I had Daniel Barker at 6, Brian Hightower at 16, Jafar Armstrong at 27, and Marquez Beason at 37. Beason and Armstrong did not play, Hightower only played sparingly, Barker had 18 catches in 12 games but that's not "6th-most important Illini", and Peters only had 1,170 passing yards in 10 games. For comparison, Taulia Tagvailoa at Maryland had 3,609 passing yards.

Really enjoyed your article about Northwestern and Mahler. Other than his 3rd symphony, any others you would recommend?

Oh man John you don't know what you've done. Everyone else can check out at this point because there's no more Illini football talk. All Mahler all the time.

Of Mahler's nine symphonies (there's a 10th, but he had only started it when he died), here's my top five:

I'm pretty sure this one will always be #1. I've listened to it more than the others. Honestly, I think I could conduct it from memory. If you're reading this and saying "I'm not really a classical music person", just go listen to the 4th movement of Mahler's 5th. You still probably won't be a classical music person, but you'll have heard some of the most beautiful music ever written. Fine, I'll give you some YouTube clips to listen to.

This is the fourth movement. It is the most achingly beautiful music ever written. Emphasis on "achingly". The whole thing pulls you along. You find yourself with this subtle "just get to the chord already" frustration but then you soon find you actually like the frustration.

Just listen to the first part of this. Maybe only the first minute. The introduction happens at :15 and it's a very simple progression to the fourth and fifth note: two-three-four-ONNNNNEEE-TWO. But just watch the seconds on the YouTube video. You think that the ONNNNNNEEE is going to arrive at 18 seconds but it doesn't get there until maybe :20. And those two seconds of ache, repeated throughout the fourth movement and sometimes stretched to 10 seconds on the final chord resolution (I swear to God if I ever conducted Mahler's 5th I wouldn't resolve the final chord for 18 seconds and people in the audience would be screaming in pain) is pure euphoria. On the recording below he pushes it to 12 seconds but I swear I could get it close to 20.

I've written about this before. The Resurrection Symphony. Some will be turned off by the singing ("he asked about symphonic music, not operas"), but it all works. I linked this video the other day, but maybe if people didn't see that I'll link it again. Mahler pairs so well with football that I once set the ending of the 2019 Michigan State game to the ending of Mahler's 2nd:

I've always been amazed by the first movement. It's so... happy. Since it's his first symphony, I've always thought of it as innocence. Ol' Gustav has no idea that depths of pain and suffering he's going to explore in future symphonies. For now, this is just him playing around with a little melody which, to me, makes me knock my head back and forth like a metronome.

Start at 5:55 and listen through 6:20. The Bob Ross of symphonies with happy little trees.

It's dark because Gustav Mahler is dying. If I'm remembering correctly, he never heard it performed before he died. The last movement just kind of... ends. There are performances where the conductor will keep his arms raised (so that the audience cannot applaud yet) for 90 seconds or so. There's that ache again.

It's not all dark, though. The first movement is in a major key. He just gets dark later on (you know, approaching death and all).

I tried to do a top-five without the 3rd (since you said "other than his 3rd symphony), but I just couldn't. It's too good. This is the symphony I linked in the Awakening post after the Northwestern game so no need for any YouTube clips here. I told the story much better over there.

I have it fifth mostly because he gets a little lost from movements 2 through 5. The final movement is amazing, but the whole thing runs like an hour and 45 minutes long. You don't have to include EVERYTHING, Gustav. This isn't a "longest symphony" contest.

OK yeah as soon as I typed it I heard it.

Looks like this wasn't supposed to come out yet, per the date!

Given our draw of Michigan, Michigan State, and Penn State next year, do you think it's likely that the record drops back a little, but we still look competitive or decent?

Will have been three years in a row at Penn State lol.

I have to admit that I skip the Mahler parts. He always struck me as long winded to the point of boring, and in any case, the symphony died with Papa Haydn as far as I'm concerned.

4th, 1st, 5th would start my list. My pyramid of music: Tier 1 Wagner, Tier 2 Mahler and Brahms, Tier 3 everyone else.

Music - pretty much classic rock only.

Really enjoyed all the Mahler selections on my 4 hour drive home Friday night. So much emotion.