So, How We Doin'? Braggin' Rights

Here's what I absolutely hate about this game.

Care to guess what he is against Illinois? Go ahead, take a guess. You won't get close.

Why? Because of Brad Underwood on the other sideline. Let's recap the whole story. Actually, if I recap it, it will sound like Bitter Robert Who Hates Mizzou spinning some tale. Let me find that article from the Columbia, Missouri newspaper.

Groce has always had a reputation for being personable. While his recruits certainly believed in Illinois, they really bought into Groce. When the school fired Groce on March 11, 2017, and hired Underwood a week later, the new coach had little time to convince members of Groce's class to stay.

Tilmon just couldn't reach that same level of trust with Underwood, whose reputation as a hard-headed, demanding coach is very different than Groce's style. So a little over two weeks after Underwood took the job in Champaign, Illinois, Tilmon re-opened his recruitment.

According to McMurray, Pickett and his family didn't feel like as much of a priority to Underwood. The coaching change "ruffled" him; so two days after Tilmon de-committed, Pickett did as well.

I think that mostly tells the story. Suggesting that feathers were ruffled is a kind way to put it, I think. The way I heard it, the ruffled feathers came from Underwood visiting Tilmon personally trying to convince him to stay committed but not then driving 10 miles to try to convince Pickett of the same. Whatever the scenario, Pickett didn't feel like a priority (which could go as far as "the new staff wasn't all that interested in keeping him as part of the class"), so he decommitted.

And so when he plays Illinois, Javon Pickett has the chippiest of all chips on his shoulder. And tomorrow night, he has the chance to get the laughiest of all last laughs: he can go 4-0 against Brad Underwood. Pickett did not play in the 2017 game when Illinois won (with Underwood on the Illinois sideline). He had reclassified to the 2018 class (more like a grayshirt since Missouri was out of scholarships for 2017). So in December 2018, 2019, and 2020, he hit 18 of 24 shots and helped his team beat Brad Underwood three times.

That fact still completely blows my mind. The Illini had Ayo + Kofi the last two seasons and lost to Missouri both years. Ayo went 0-3 against Mizzou. I just can't believe Missouri has won the last three (and 7 of the last 12). Missouri! In the Braggin' Rights game! How??

So I am not in any way looking forward to this game. Yes, we're favored by 14.5. Yes, Missouri just lost to Kansas 102-65. They lost to UMKC by 14 at home. They lost to Liberty by 21. They are KenPom #145, just ahead of Colgate, Tulsa, Marshall, and Cleveland State. By every single metric, not only should we win, we should win going away.

I mean, try to find the W's on KenPom's projections for the rest of Missouri's season: 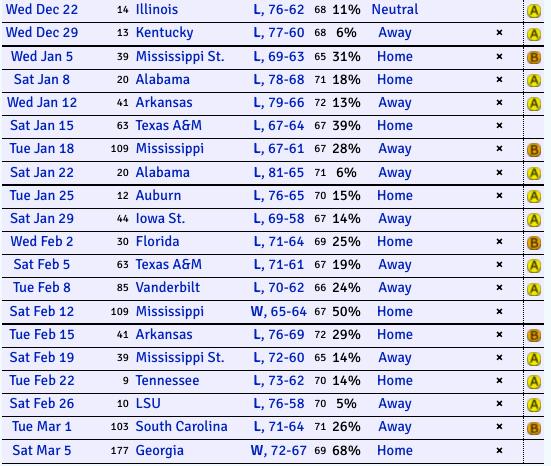 This is a baaaaad basketball team. Using KenPom, this is the sixth-easiest game on our entire schedule, sandwiched between Arkansas State and Nebraska. Missouri might legitimately go 9-22 this season.

This is a personal problem, of course. I have too many scars from this game. Yes, we lead the all-time series 32-19, but some of those 19 losses left me battered and broken. So this really isn't a "here's what I think happens in the game tomorrow" kind of post. This is a "here's my raw emotions" post where I just want the game to be over with.

I just deleted some stuff where I spiraled further. Only this game can do this to me. I need to get a grip here. If I let myself spiral any further I might predict a loss.

So I'll just close with this. You will be tempted to write something like "we completely destroy them - Illini by 40" in the comments. Do not do this. I fully realize that this is an extremely safe bet. KenPom has this one as an 89% chance of an Illini victory. You'll almost certainly be correct in your "Illini win big".

I just don't want the words to appear on the site. I need to stay in this mentality, because if I start to think "man, they're right - we're gonna win big" and then we lose, I break in two. I cannot break in two.

Please, just get this game over with. And have the scoreboard look something like this:

Superb post! Thanks! Too many people truly don't understand why we have struggled so much against them.

A superb post. Too bad it requires so much personal angst!

The joy of winning this game never, never, NEVER comes CLOSE to the agony of losing it. I'll sit down in the arena again tonight, turn to my sons at the tip, and say, "Why do I put myself through this?"

You're right about the losses hurting more. To me, it's these emotional edges lived through sports that keeps me coming back. And there's no game I lovehate more than Braggin' Rights. Have fun at the game!

Even in some of the Illini's best years it's been a hard fought battle. 2004 was way closer than it should have been when we were ranked #1 and they were unranked. Also 2000 (we were #5 and won in OT when they were unranked). They should not to EVER take this game for granted.

I understand how Robert feels. The same reason I felt about going into the Northwestern football game this year. On paper we had the better team and we were favored at home. But as proved in the 2019 game when the Cats had the worst team in the B1G, we totally tanked. And then in 2020 when Illini fans suffered losing to both NW and Mizzou on the same day. That too much suffering for any Illini fan to endure.

Wow. I had willed myself to forget that double punch in the sack. Please, please, please let us win.

So Pickett shoots 75% in those 3 games just because he hates BU & Illinois and is more motivated to play against us? I'm not sure I buy that. More likely, he was just lucky. Small sample size and all that. If what you say is true, then with all that pent up hatred he should be able to repeat that performance tonight. Let's see how he does.

This years Mizzou team just is a great reminder about the hiring of Clownshow Martin and Coach Underwood. So many people were wishing we had hired Martin because of his recruitment of Tilmon... not going to see any hands today that wished that were the case.

We completely destroy them - Illini by 35 at the under 8 before we call off the dogs.