I don't really mind it. I've always told people that I could so easily adapt to the truck driver life. Those men and women drive 2,500 miles per week. 1,040 miles in 36 hours is nothing.

But you do have a lot of time to think. You can only listen to so many podcasts, only shuffle that playlist so many times before you're sick of every song. So I'll often turn everything off and just sit there and think. (And drive, of course.)

On this trip, especially on the way back, it hit me that I need to zoom way out. I need to put my finger on the mouse wheel and roll down and roll down until I can see the entire earth on the map. When I do that, here's what I'm looking at: Illinois basketball is in the top-5, competing for a Big Ten title, and in the hunt for a Final Four. I know you know that - I knew that - but I feel like I appreciated it for the first time yesterday. Like, felt it in my bones.

This is where I'd usually get all "see, you younger fans might not understand...", but I feel like this is something that every Illini fan understands. Either you're a young fan who heard stories and don't understand why your fandom never included a Dee & Deron or Kenny & Nick, or you're an older fan who lived it and simply can't believe that 2013 was our last NCAA Tournament appearance. Whether you lived it or you read about it, you're fully aware that we were a top-15 college basketball program for a quarter century until we were sent to wander in the wilderness, being punished, apparently, for disobedience and unbelief.

If you want to know what the wilderness looked like, I tweeted this graphic last week: 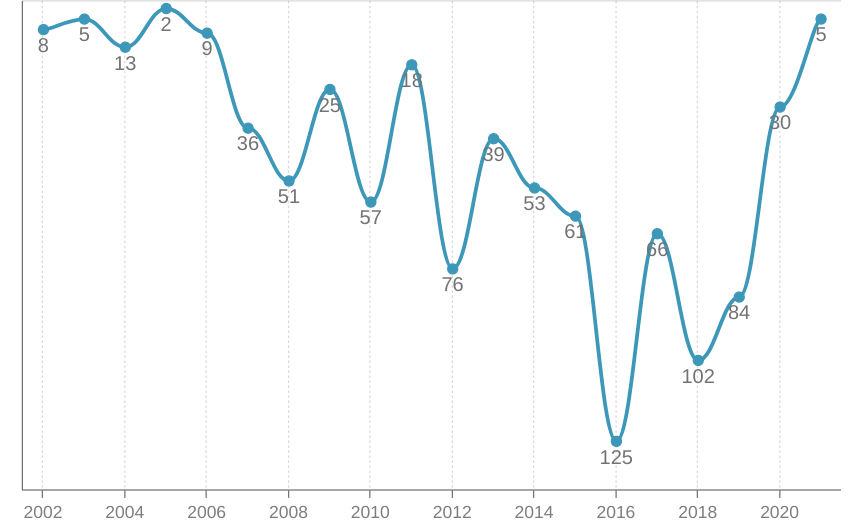 That's our KenPom ranking every season from 2002 to this year. Let's talk about it.

First off, the #125 in 2016 does need an asterisk. Not a full asterisk, but maybe a half asterisk. That would not have been some great season, but without injuries it's probably a straight line from 39 in 2013 to 66 in 2017. The (partial) reason for the drop to 125 in 2016: Tracy Abrams ruptured his Achilles and missed the season, Leron Black played eight games and then missed the rest of the season with a knee injury, Mike Thorne missed the rest of the season after a Thanksgiving-weekend injury, Kendrick Nunn missed eight weeks with a thumb injury, and what might have been the 60th-best team became the 125th-best team.

Even being generous towards that season, the trend could not be more clear. It's pretty neat and tidy, really:

I'm not telling you anything you didn't already know. I'm simply setting up my journey leading up to my drive home yesterday. I can get so wrapped up in "how did we almost lose to Nebraska?" and "Giorgi, Curbelo, Da'Monte, and Grandison didn't score, and that means we're in big big trouble on this upcoming three-game road trip" that I lose the fact that we've climbed all the way back to being the #5 team in the committee's eyes on February 13th. Maybe it's the fact that I've been so focused on getting back in the Tournament to end that horrific streak that my "I love my team" side wasn't allowed to truly celebrate being top-5 mid-February.

If I could sum up my thoughts from the drive home, they were basically this: "Ayo saved us from one of the worst losses of my lifetime and that might mean trouble on the horizon but my God do I love this team". Ayo sat down at the Nike Store in Chicago in October of 2017 and promised to bring Illinois basketball back to prominence and that's exactly what he did. I've spent so much time the last 15 years wondering if we're back or if we're on our way back or if we'll ever get back and on the drive home it was almost "wow, I think we've been back for a decent amount of time now without me even realizing it".

Here's a better way to say it. Driving to Nebraska, I still had this "but after Ayo and Kofi leave do we really have enough of a foundation to sustain this because if this is just a one-year thing I will absolutely hate that because don't tease me I want Illinois basketball back". Driving home, I didn't care. What Ayo has done these last two games, the way he and Kofi have raised their play this season, the development of the Curbelo-Miller-Hawkins class - I'm back to feeling about Illini basketball like I used to feel about Illini basketball and I kind of don't care if that meets some textbook definition of "back" or not. All that matters right now is that the long-forgotten feelings have returned. Affection. Adulation. Appreciation.

From that place, I don't really fear this tricky three-game road trip next week. I'm not even worried about barely beating Nebraska. I'm just fully focused on the thread that leads from Ayo at the Nike Store to Kofi at the Florida Atlantic game to Saturday's "Illinois is the top 2-seed, the #5 team on our list". Selection Sunday is four weeks from today, and I cannot wait.

The day Josh Whitman fired John Groce, he stood at the podium and talked about what State Farm Center was like 10 years ago. And then he said "if we're not careful, it will be 30 years ago". Well, it's four years later, and here we are, #5.

Today, I'm just so grateful for that. A big thank-you to everyone involved in this turnaround.

And God forbid, the tourney doesn't work out the way we want it to, I will listen to the angst the same way I did and had myself in the 80s under Lou Henson, but having a better appreciation of having a team that is actually has expecations.. or even just having go to players to close out games since coming out of the wilderness after 15 years.

the excitement in your bones when you sit down to watch EVERY B1G conference game with a valid expectation of winning ( or at the very least to be competitive the whole game ) is a great feeling .

There is no reason per se that we ever need to lose that excitement .

Great article Robert - I've felt the same way. So much to appreciate in both the way Ayo, Kofi, and the rest of the team have played as well as how they've handled themselves off the court. By all accounts great people who we can be proud to have wearing the O&B.

Also stuck out to me that the 2011 team was #18 in KenPom, better than either 2009 or 2013, which tend to be much more fondly-remembered teams. Always wished that McCamey, Tisdale, Davis group would have had more of a moment.

This team is the most fun team we've had to watch since the early Bruce days. Yes, they can be infuriating at times but that's because we know at their best, they can win a Natty, and they can also lose to a sub-150 team. Yet they are still in the hunt and that's all we can hope for at this point. It's also fun that it's not out of the realm of possibilty that Ayo could be Player of the Year and perhaps the best ever to don the Orange and Blue. And what's also not so crazy that Kofi isn't far off in the conversation for best on the team. It's great that we can have those conversations again because it's been a long, long time.

Also, in fairness to Bruce Weber, you should probably also note that Self won with mostly Kruger recruits.

That 2002-2006 run was amazing, and it might take a while to recruit enough talent to repeat that kind of run. We will probably take a step down next year without Ayo and Kofi, but now Underwood can recruit off this season and last--and hopefully build even more sustained high level success.

Yes, great article as always. Illinois should be a top 15 team year in and year out like we used to be. Nothing can be taken for granted in college sports but it would be nice to get back to regularly competing for Big ten titles and at least being a top 4 seed. I do worry about next year but if Kofi returns (which I think many scouts would say he should) I think we keep the continuity that was lacking the past several years.

(Norman Dale voice looking at this team) "I love you guys"

How about some love for our Coach? Coach U is the truth and he makes me damn proud to be an Illini. I'd love to see a write up and some love thrown his way!