Let me just paint the last hour for you. Reporter to my right was going with the biggest pressbox no-no of 2021: attending a Zoom presser with no headphones. I found the true "overflow" pressbox and that photo right there is the view. (The only reason I could sit in the other pressbox with the better view was because Maryland and Minnesota didn't really bring much media so they weren't using their allotted seats.) Then, just as I'm sitting down to type this post, someone rides by on a scooter. I mean, if I knew that scooters were allowed in the pressbox, I'd have been all over it. BUT WHO WOULD THINK TO ASK?

And I haven't even gotten to the most recent "this has to be a prank" thing: the guy at the table next to me coughing like he's Fred Hoiberg at the 2020 Big Ten Tournament. Bro, when you have a bad cough, even when masked, people are just going to give you that look so you have to stay home. You might be triple-vaccinated and tested twice this morning but there's a lung coming up here and I guarantee everyone around you is thinking about the durability of your mask.

Let's go through all of this one by one.

First, when you saw this post on the front page or when you clicked and saw the banner photo at the top, you might have had a question about the two courts. Some answers:

For example, the entire Elite Eight will be in Lucas Oil on Monday 3/29 and Tuesday 3/30 (yes, Monday and Tuesday this year). And each day, one game will be on one court and then the next game will be on the other court. There will be fans at all games, so with two courts, they can seat half the stadium for one game and the other half for the other game. No one uses the same space twice, clean it overnight, do it all again the next day.

So once the BTT is over, they will swap out the pinwheel Big Ten court for a matching NCAA Court. And then this venue becomes two venues.

Pressboxes this year are quite different, as I'm sure you could guess. The basic rules: wear a mask, stay distanced, don't move. They made it so everyone would be safely spaced, and they eliminated all in-person interviews and found a way to bring the interview to your laptop (Zoom), so just stay there and you'll be able to cover the entire game.

Also, bring headphones. Absolutely 100% bring headphones. Headphones are more important than wearing a shirt. The postgame press conferences are all on Zoom, and you're all watching that Zoom from your seat, so without headphones, especially with a slight delay in this Zoom vs. that Zoom, you MUST have headphones. Otherwise, press row is 15 laptops all playing the same audio out loud, some of it a quarter-second ahead or behind the others. It basically cannot be done with public sound.

Care to guess what the reporter next to me went with? Yep. Speakers turned up with a handheld tape recorder held next to his laptop speaker. Some habits die so incredibly hard.

Man, I wasn't even trying to be The Pressbox Tattle on this trip and here I am, at it again. It's just hard for me to describe the level of pressbox sin he just committed. It's a Category 6 pressbox sin in 2021 (on a scale of 1-5). I once saw a reporter sent to a Siberian prison for simply having his earbuds too loud.

Look, I'm thrilled to be here. I'm so excited to cover whatever run we make this weekend. The Big Ten could have easily said "you know what? no media" and there's nothing anyone could have done. They have a tough job - make sure the media is safely distanced and can cover the game - so I'm not even complaining here.

Upstairs - another thing I didn't realize at first - there are two pressboxes. A small one near the south endzone (were the court is set up) and a big one near the north endzone (where the NCAA Court is being set up). There are assigned seats in the small one and, if there are no open seats, everyone must go to the large pressbox. This is the view from there: 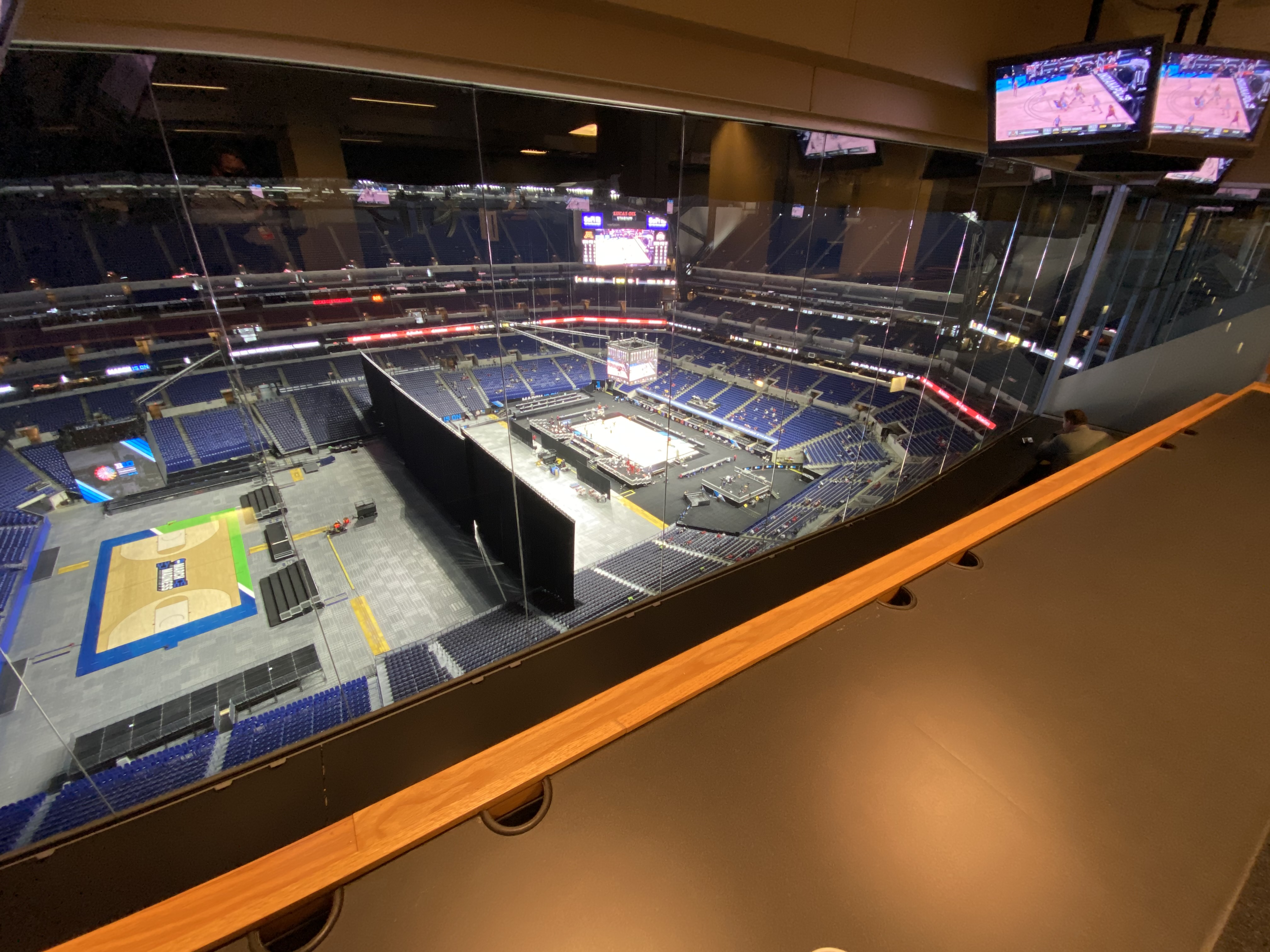 I mean, at that point, you just have to say "no more media". There's no way to watch basketball from here.

Again, this is not the Big Ten's fault. The other option is to cram the media down on the floor and up in the other pressbox. They're spreading everyone out by at least 10 feet, and when you do that, it severely limits the seating capacity. The only other option - the big pressbox on the north end. And they even note that the game will be on TV in this pressbox and can be covered that way. They get it. No one looked at the picture above and said "this is fine".

The reason I didn't have to sit here for the morning session: neither Maryland nor Minnesota filled their allotment of press passes. So there were plenty of open seats in the small pressbox.

Perhaps I should describe it this way. I think there's 24 media seats on the floor - they were all full (well, not "full" because there were empty seats, but "full" in the sense that there was a name on each chair). There's also 19 seats in the small pressbox. Those were not full today so I could sit there. Tomorrow I'll be on one of the lists (since Illinois is playing) and we'll see if I'm downstairs or upstairs.

And they swap it out each session. Right now I'm down in the back of the "big" pressbox writing this because they clear everyone out and disinfect the tables. Then they put up a new chart for the media of those next four teams. If there's open spots, I'll sit in one of them. If not, I'll have to watch from down here.

And down here is kind of fun because....

One more time: why didn't anyone tell me?

Tell you what - I debated for quite a while whether to post that. I'm guessing there's a very legitimate reason for her to use motorized pressbox transportation. I don't want anyone to think I'm mocking this. I'm celebrating this. Press. Box. Scooter.

All I'm trying to do here is point out the bizarre experience of today. Overflow pressbox binoculars and tape-recording laptop speakers and coughing up a lung during Covid and pressbox scooters. I'm almost certain I'm part of a documentary.

Will you guys let me know if this ever airs?

If nothing else it’s a nice opportunity for a dry run for the next trip you make back to Indy! ??

How can you say it's not the Big Ten's fault and in the same paragraph say they're spreading everyone out by at least 10 feet?

Maybe the B10 has special sauce secret science.