First, here's what happened. Juwan Howard said something to Mark Turgeon, or Mark Turgeon said something to Juwan Howard, and they started to walk towards each other at halfcourt. Both got T's. Then Howard tried to break away from his assistants and charge again, this time, from my view, yelling towards Maryland's Darryl Morsell. That second charge earned Howard a second T and he was ejected.

Here's how it played out:

That famous Big 10 Michigan-Maryland rivalry has boiled over again! pic.twitter.com/0LWVRp0BKJ

At about the :25 second mark, when Howard moves towards halfcourt again, trying to break away from his assistants, you can see Maryland player Darryl Morsell run to half court. Watching it live, from my angle, it appeared he was getting between Turgeon (who had walked back to the Maryland bench) and Howard (who was pressing forward). That's when I saw one of the officials point, so I was assuming that was the moment Howard was tossed.

One benefit of being here - I can attend any of the press conferences (on Zoom). So I hopped on the Maryland Zoom to see what Turgeon and Morsell would say.

Turgeon didn't say much about it. Wanted to correct the report on Twitter (told to him by the SID) that he had said something about "banners coming down". That was just someone starting a rumor, apparently. In his version, he noted that he only said "don't talk to me".

As to what happened, here's what he said:

He did not elaborate on what "it" was referring to.

Darryl Morsell also joined the press conference. I tweeted what he said:

Darryl Morsell is up on the Zoom. He went third-person, which I love. "Nothing was said to Darryl".

All he would say is "you know how teams get" (when talking on the court).

LOVE the use of third-person.

The Michigan presser was happening at the same time, so I couldn't attend both. Here's what Juwan Howard had to say:

Michigan head coach Juwan Howard says that Mark Turgeon "charged at him" and that he acted in defense.

"I was raised by my grandmother and also by Chicago... When guys charge you, it's time to defend yourself." — Juwan Howard

Obviously, we're not going to know what happened. That's just how things go. I asked Da'Monte Williams and Brad Underwood what Alando Tucker said from the Wisconsin bench to get his technical two weeks ago, and they both declined to say. I didn't really expect Morsell or Howard or Turgeon to give specifics.

But - and this is important - that's the story here. If you're wearing a credential around your neck here in Lucas Oil Stadium, that's why you're here. When something like this happens, you're the person tasked with finding out what happened. I'm the furthest thing from a big-J journalist, and I write about Illinois using "we" and "us", but even I know that. There's still a job to do.

As I've been grumbling about all season, no one seems to want to do that job. Especially home-town media. After the Michigan State game, with the only Flagrant-2 being called in the Big Ten (and maybe college basketball?) this season, no Michigan State reporters asked about it. They knew they now had a shot at covering an NCAA Tournament game, and they knew that the MSU fans who had stopped reading were going to start reading again, so they needed to get some narratives out there. They wanted to ask: "Tom, do you think Illinois was caught looking at your record and forgot about your trophy case?"

(One quick note: the press conferences happen at the same time. And preference is given on the Zoom to local media. If that wasn't the case, I'd likely have attended the MSU Zoom and asked the question myself. But I was on the Underwood Zoom at that time. This is why the local media has to be responsible. Remember that word - responsible.)

When asked about this "no one really asks any more" thing, most media will bristle. "Stupid fans - of COURSE we're doing our job". There's no real accountability because why would there be? Michigan State wins basketball games, they make money. No one is going to rock that boat.

Here's an example of the bristling. Someone (who later deleted the tweet) pressed MSU beat writer Graham Couch on whether he asked about whether Tom Izzo was asked about the Flagrant-2, and this was the response:

He was asked, of course. Not I’m those ridiculous terms - especially since the first was retaliation for a thump on the head by Kofi.

I've thought about that tweet a lot the last 2.5 weeks. "He was asked, of course" really says it all. The "of course" means "what do you think of the MSU media that no one would ask about a Flagrant-2?". And yet, no one asked. Tom Izzo made a side reference as part of another question 10 minutes-in saying that he "didn't see it". Perhaps more egregiously, no one followed up after that to press him on it. MSU just beat a top-5 team. Get out of here with your "they broke the nose of a national player of the year candidate and at least one reporter should mention it".

Why would they not? Red meat. That's the point of everything now. Instead of asking about the key things that happened, reporters want to build narratives and carve out red meat to toss to the fanbase. It's an epidemic.

(Can I still use that phrase when we're struggling with an actual epidemic?)

Here's the example from today. A Michigan media member is here. He tweeted this:

Maryland's Morsell still yapping on the way off the court.

That's a lion-sized chunk of red meat. He knows exactly what he's doing. He's in the building, the fans are wondering what's happening, so frame the 22 year-old kid who is "yapping". The effort isn't "what really happened here?", even if what happened here was Morsell charging at Howard, causing him to lose his cool. I don't think that's what happened, and my read watching it live was that Morsell was bothered by something Howard said, not the other way around, but really, nobody really knows what happened at that point. That's what the press conferences are for.

But there's no need to wait for the press conference. Pressers don't really matter much when meat is already being carved up for the lions and the kids have their noses pressed against the glass. Don't wait for the presser. Just toss it out there and... 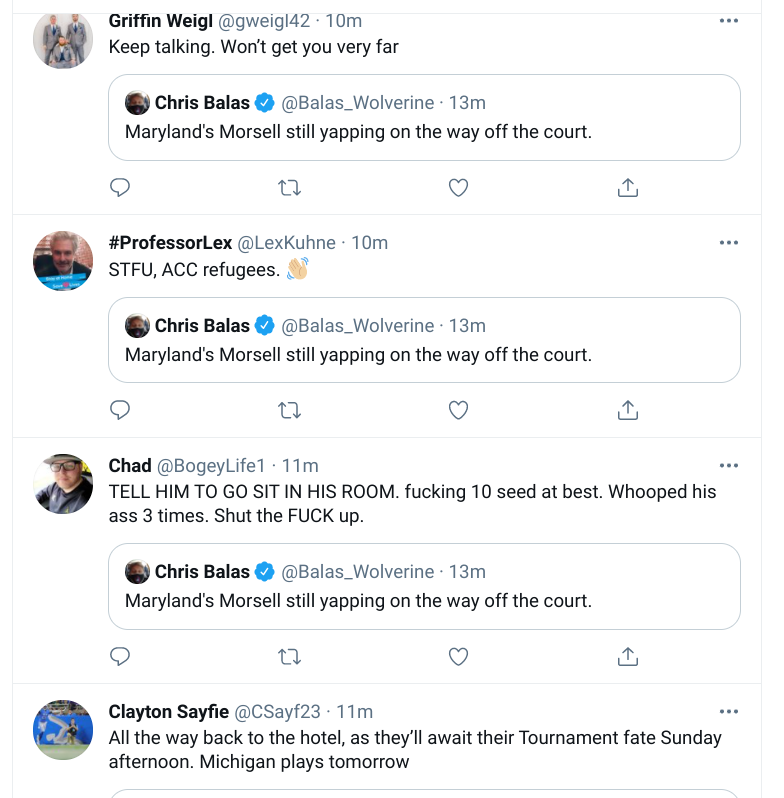 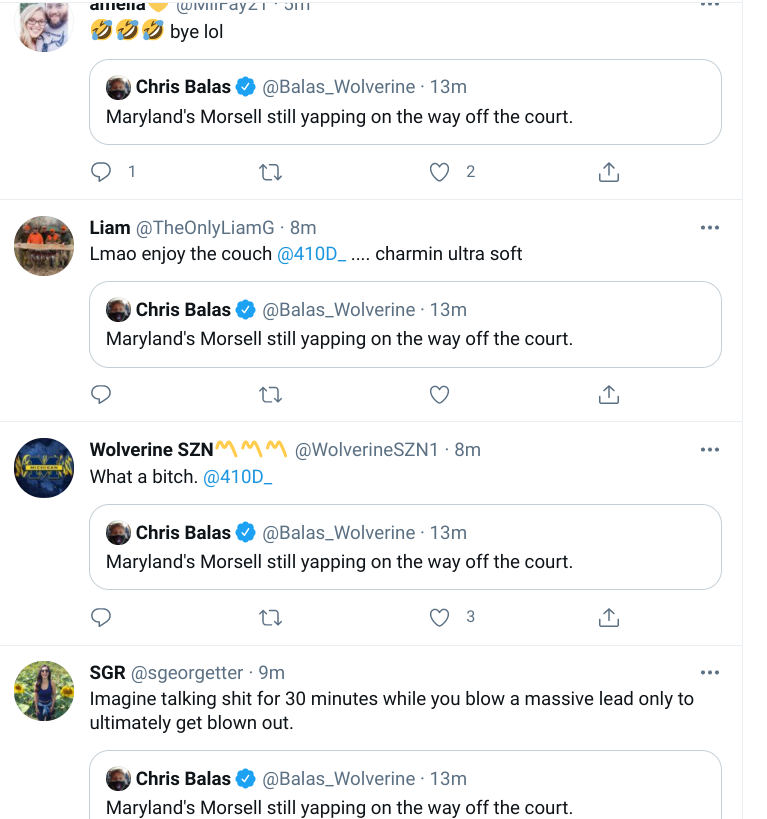 See the Michigan fans tagging Morsell on Twitter? That's just the worst of college sports right there. Someone on a couch, incited by someone on press row who irresponsibly exaggerated a moment on the court, wanting the kid to see that he thinks he's "charmin ultra soft" (among other things).

I've talked a lot about my new job in the last year. How I've been doing this for a year but I haven't yet been able to go to a cocktail party and answer the question "so what do you do for a living?". Been looking forward to that moment for a while. 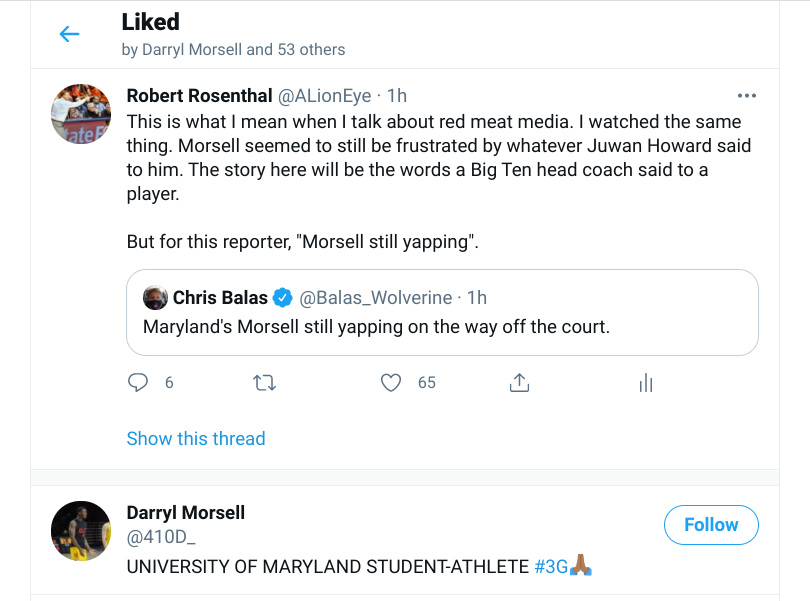 I like to think of Darryl Morsell liking my tweet as a little nod across the room. I saw what happened, he knew what happened, but the Michigan Man wanted to stir up the fanbase. Who would question him? Slice it up and toss it.

Because the Michigan fans tagged Morsell in their replies to that Tweet, and because he had to read all of their hate in his mentions, he discovered my tweet calling it out. And he liked it. Which I choose to read as a little "thanks, man" from across the room.

I don't know Darryl Morsell. I've never interviewed him. Up until today he was "the guy who won Big Ten Defensive Player of the Year over Trent". But now I see this whole thing a little differently. If a Michigan Man sees him as someone to drag for fun, my "job" is to say something.

"What do you do for a living, Robert?"

Integrity. You have it. The world needs it. Thank you.

Blaze your own trail.

Awesome article Robert. People are such idiots and the media feeds off that ignorance in nearly every way. It’s all about the likes and clicks. We make fun of teenage girls posting selfies on IG and TikTok only to see how many responses they get and yet grown ass men in the media do the same stupid crap everyday! Discernment and objectivity are dead in the media! Thank you for taking a stand! Keep it up!

Redefine who you are and what you do. As long as you keep covering the Illini I’m all in for supporting you also calling out the worst of college sports media.

Robert, you have hit upon a theme that transcends sports journalism and infects most of our broader media today. We no longer have journalists, we have activists who are posing as journalists.

Just so we’re clear—this policy does not extend to Brad Davison of Paul Mulcahey, right? Or any member of Iowa men’s basketball team. RIGHT?!???????!!

A couple days ago, I sent my friends my “all punk team” which included a top 5, newcomer punk, punk of the year and punk coach of the year (this year I inducted one player into the big ten punk player HOF). That’s an example of some things my buddies and I do and I’m sure many fans across the country do. We don’t post it anywhere. It’s just some goofy crap we do trying to get a laugh out of each other. That being said, if I had waited until yesterday’s game, Howard would have beat out perennial punk coach of the year McCaffery.

You love to see it!

Great to have you out there doing this Robert. And even better that you care enough to call it out when it doesn't have to do with the team you're covering.

finally catching up on all Illini content. This is so true for reporting in general. Dragging a 22-year reprehensible and a gross use of that reporter's platform. Purposely mis-framing the situation to rile up the worst of a fan base.