Just completed an Arizona '05-like comeback. Just one thing after the other. Looked bleak six hours ago, now I'm ready to rock. What do I need when I reach the point of mental and physical exhaustion? To be a fan. So I bought a ticket and I'm going to the game tomorrow. The plan: buy five more tickets.

I'll just run realy quickly through my afternoon. I didn't know when I decided to write the Big Ten Tournament "blog style" (like it's 2011 again) that I'd get stuck in "blogger writes about Illini through the lens of himself" for a bit. But I promise to get back to, you know, covering the team and stuff. After I go through my afternoon.

Hit publish on the post. I hate it, it's embarrassing, I want to delete it right now, but it's part of my process. I needed to get it out. I hate that I write this way, I hate that my fingers allow me to click "publish" on something like that, but ask anyone who knew me at age 7 or met me last year - it's the Full Robert Experience.

My wife gets home soon after that. Neither of us has had lunch and it's 2:45. I tell her that I'm still stuck and that I just wrote about it on the website. She gives me The Look because she knows what it probably says. We decide it's time to combine lunch with dinner and go out to eat. We choose Red Lobster. Want to start to repair me? Face-to-face dinner with my wife where we stack our phones and just talk. With cheddar biscuits.

She helps me understand that the best thing I could do to "do my job" is to wear orange and go to the game. Tied up in knots after a long weekend in Indy and some vaccination side effects? Let it all go. My team is in the NCAA Tournament, and I can just sit there and cheer.

Then - and this is the dumbest little thing - the song Here's Where The Story Ends comes on at Red Lobster. Love that song. Reminds me of how my taste in music transitioned from high school to college. Something about that moment - lunch/dinner with my wife at an actual restaurant, second vaccine shot fully settled in, the lyric "it's that little souvenir of a terrible year" - and I felt like 12 Months Of Covid was over. I know it's not "over", but it was this very hopeful moment.

This led to an unstacking of the phones and a text to Carmen. "If I go tomorrow you in?" "Yes. How much?" I check stubhub. $680 for a single, $800 each for a pair. Ooof. I tell Carmen I'll look around and text him later.

We leave Red Lobster and go to Mattress Firm. What is this, 2019? Eat out at a restaurant and then go to a mattress store? While at Mattress Firm, my friend Ben texts me. Someone put tickets out on Ticketmaster and there were legitimate $49 tickets available for tomorrow's game. WHAT?

It was a funny scene because the Mattress Firm guy was mid-"what if I threw in the box spring for free" when I shushed him to go to the other side of the store, frantically trying to buy tickets on the Ticketmaster app. I click on the tickets, process my order, put in my card... and "something went wrong with your order". By the time I get back to the main screen, the tickets are gone. WHY, GOD?

More like "why, Chase". I get a text from Chase. "Someone tried to use your credit card to buy tickets on Ticketmaster so we declined the transaction. If this was you respond YES." I appreciate you having my back, Chase, but YOU JUST COST ME $49 TICKETS TO THE GAME TOMORROW.

I get back into Ticketmaster and their resale tickets have dropped significantly (perhaps through some formula where all the prices dropped once the $49 tickets hit the market). I grab some for right around the total points Adam Miller scored this year. Transaction processes this time, tickets are mine. I text Carmen that I landed two. 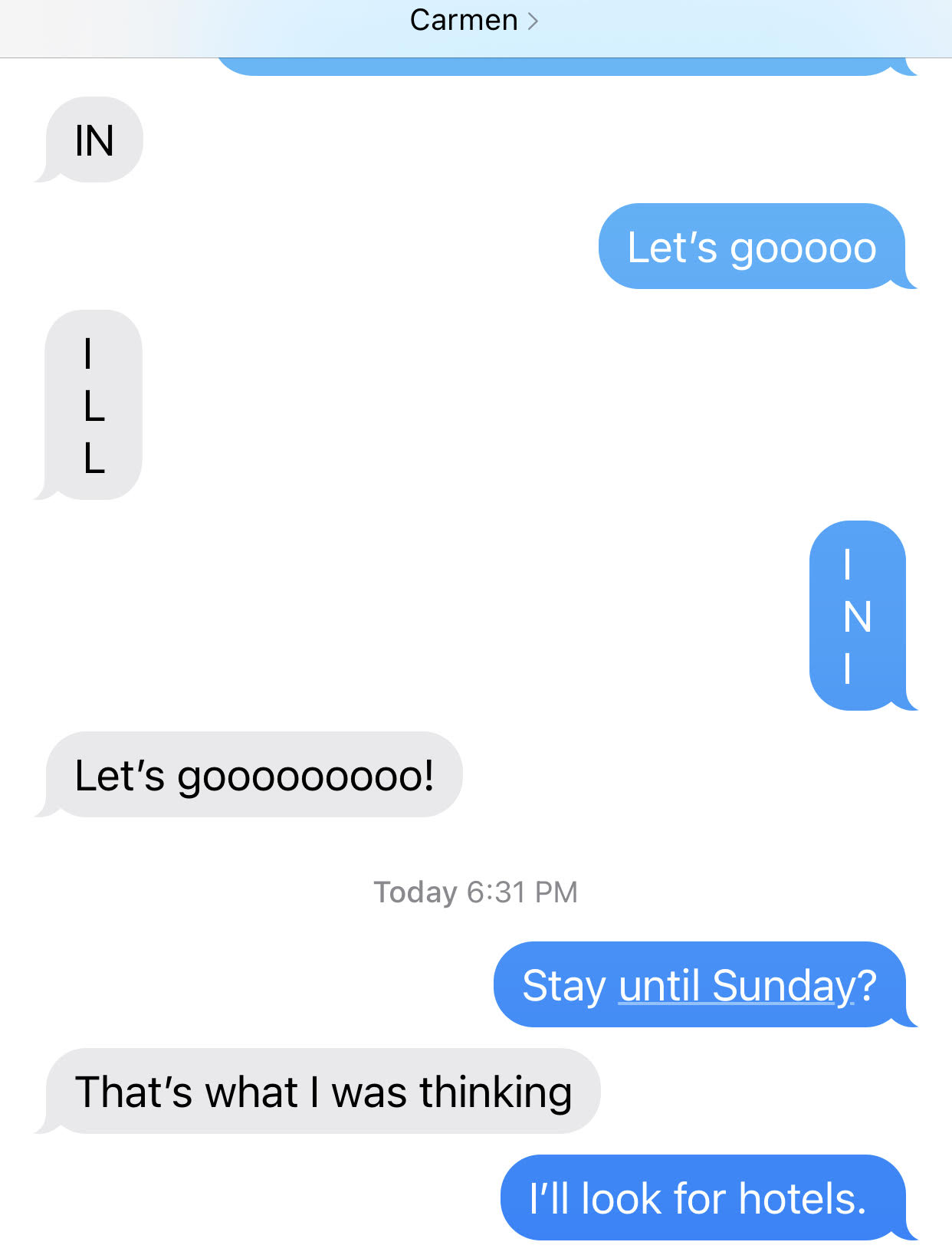 I mean, this was so obvious - didn't get a press pass, so I can either mope or I can be a fan - and I can't believe I almost chose "mope". Sorry you all had to see that.

To the game. How do you preview a 1-16 game? It's "just don't be Virginia" for every one-seed forever. "Avoid disaster" is the name of the game.

(I do not want a close game tomorrow.)

I wouldn't mind a bad performance. Every team that wins a title has that one game where everything is off, and I'd prefer we play that game against the 16-seed than play that game in the Elite Eight. But really, I don't want any kind of game that's remotely close.

Here's what I want. A heavy-Illini crowd (duh) with huge cheers on the first few three pointers. Run out to a lead to where those cheers are some of the loudest of the day. Like, the timeout that Drexel takes six minutes into the first half is the loudest the fans get all day. Second half, there's cheers, but with a 19-point lead, we're already looking towards the next one.

Would love to get Coleman Hawkins 12 minutes, too. Just feels like we're going to need him at some point the next three weeks. Maybe even six minutes from BBV so he can practice his "first half defense needed when Kofi and Giorgi have some early foul trouble". Get all of the "if they're needed they won't be wide-eyed entering the game" out of the way in this first one. And then empty the bench with four minutes left.

Really, though, the biggest thing tomorrow: we're playing in an NCAA Tournament game. 2,917 days since the last one. Two thousand nine hundred and seventeen days. President Obama was two months into his second term. Oooh - here's a better way to put it. This guy... 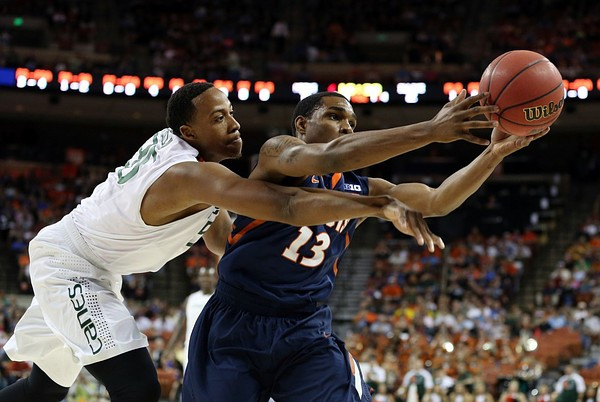 We're finally back, I'm back, I'm on my way, and I'm going to enjoy each and every ounce of it. And then I'm going to upload a From The Stands FROM THE STANDS.

Robert, I read your newsletter and while the frustration was obvious, i could only think some better destiny was in store. To hear you’re going to the tourney as a fan, not a reporter, is the greatest outcome possible. For my money - THIS is where you belong this weekend. Go get crazy. No other agenda. I can’t wait.

Your uniqueness is that you are a fan first. Stay in that lane and have fun

So glad you're going to the game Robert. Put the tickets on the IlliniBoard account - we all want you there. And personally, you deserve more than anyone to be cheering (OUT LOUD) for this team.

I know it gets a little muddled now that you're doing this full-time, but Fan Robert will always be the best Robert in my mind.

So glad that you are going to the game. Since you gave away that you will be wearing orange, you should be easy to spot and we'll be looking for you! Enjoy the fan experience.....you deserve it.