I noticed them early on. There have been no fans at home games - not even parents - and other arenas like Rutgers and Penn State have also been fan-less. Wisconsin had a grand total of 14 fans - two family members each for the seven seniors. So when I see Illini fans at a game, of course I'm going to notice. I'm going to want to join them.

I can't, of course. The whole point of allowing only a few people in the building is that no one leaves their seat and everyone is generously distanced and masked. I'm not going to risk my credential to wander around the arena and sit near Illini fans. I'm great at following directions: find my seat, stay there, report on what I'm seeing, don't move.

But even I was a little jealous. Two Illini fans got to see that game in person. They got to cheer the Miller three, the Kofi dunk, the Trent crossover. How?

After the game, I asked them. Well, I asked if I could ask them. I'm Distancing Man this week so I didn't want to just walk up to them and ask some questions. The stairway leading down from my media seat, however, was the same stairway leading up from their seats. So I stood on the landing of the stairs to my section and yelled down to them as they passed, asking if I could get one of their phone numbers to ask them some questions about their night. One of the guys gave me his number. I asked for his name.

Brandon Lieb's uncle. Now this is starting to make sense. How did two Illini fans get into this game to sit in the Michigan Friends & Family section? They're family. Brandon applied for family tickets and their seats were waiting for them at will call. At will call, at Crisler, for that game.

Steve told me that he attended the game with his cousin, Jason Primer. Jason wore orange; Steve kept it a little more subtle with the blue Illini shirt. You saw my photo of them from above - here's a photo they took from their seats: 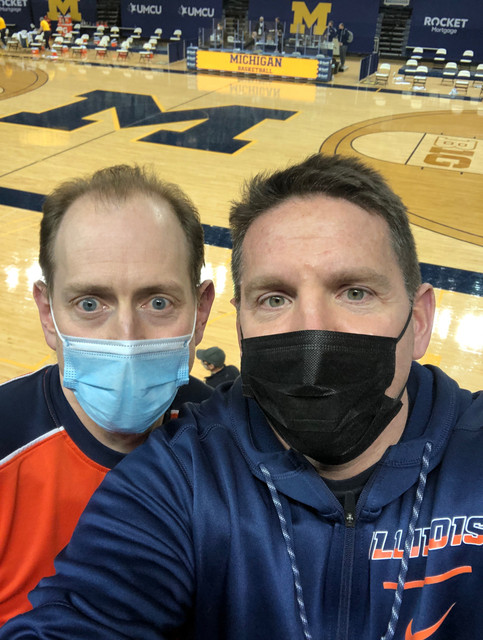 They both live in the Chicago area, so they did a drive-out, drive-back trip, arriving just before the game and leaving immediately after and driving back to Chicago. I asked him to take me through the day. What was it like knowing they'd be attending that game?

"We were basically saying 'do you believe this is happening?' We're pulling up to the stadium like we're going to a Dairy Queen. You know? Literally, parked right in front. We walked right in, we get our tickets from will call. We felt like rock stars. They're like, 'Here's your tickets.' And then people are guiding us to our seats. You have like the whole arena to yourself. We were like, giddy. It was ridiculous."

I didn't have the best view of the fan sections from where I was seated, so I wasn't exactly sure if they were the only two Illini fans. Steve confirmed that they noticed one more in the stands.

He continued that thought. "I felt like it was almost like a private showing for us. For watching Tiger Woods tee off at the Masters. I mean, it was ridiculous."

That's such a great way to put it. A "private showing". That's the emotion I've been feeling for all of these games this year. It doesn't really feel like a college basketball game. It feels like you're attending the dress rehearsal in the afternoon, with only a few people in the seats, but you know it's not the real performance. The actual performance happens later.

We talked a lot about the game itself, of course. And I could sense how excited he was for his nephew. I mean, we're all watching the players lose their minds after Trent's crossover three. Can you imagine sitting near the court and looking across at your nephew getting to enjoy that with his teammates?

There's no contact, of course. He can't even get within 50 feet of his nephew. But he did get a few waves from the bench, and that seemed to be enough for Steve. He's an alum, so to see his nephew wearing orange and blue is very special for him. I asked if he thought that maybe, with this improbable blowout, that Brandon would get in the game.

"Yeah. We were hoping. But, listen, we also understand that they're seniors. Zach Griffith is a senior, so get the senior on the floor. Just for the seniors to play on the Michigan floor is a huge thing. Brandon's going to have his time, he'll have his moment."

"And, right now he's just working with Fletch, trying to just get big, get strong. And, he's sort of Kofi's sparring partner in practice. Getting bruised up and just trying to learn as much as he can. So, it's not about just getting into the game. It's about just being part of the team, and he's loving the experience. He'll have his moment. So, we were just happy to see him, and happy that he's happy. That's all that matters."

This game was personal on several levels for Steve. Obviously, he's watching his nephew celebrate with his teammates across the court. But he's also an alum, and his graduation year might have some significance: 1989.

"I graduated '89, which was as you know, the heartbreaker to Michigan. And, looking up at that banner is like, it's so heartbreaking to see that. Because, obviously the Flyin' Illini beat them twice during the season. So that was resonating with me too. It wasn't complete redemption, but there was some satisfaction being the only ones there at Michigan, a highly ranked team. And, looking at that banner, which obviously resonated with me personally. I'm like, 'Okay. This is special'."

I asked about the drive back. He said their first words were "do you realize what we just saw?". They did what we all do driving home from a game like that, asking how Curbelo could get his shot off without getting it blocked, re-living the Adam Miller deep three, going over and over the plays from the game they just got to see.

Except this time, it was basically a private performance, just for them. I mean, can you imagine?

They didn't have to.

That is SO COOL! Big Smile and Goose Bumps at the same time just reading this!

Way to go Robert! You could've just "ILL-'d" them, but you got a cool perspective on their experience. Thanks

This is why I give you my monies. I can't think of another writer who would think of writing a story from this perspective. Thanks.

I love this! I told people who were on vacation in Mexico this week that I was living vicariously through them.

I feel exactly the same way about this article- thank you for sharing this perspective. I miss going to the games so much. This helped me feel the emotions of this game. Great write up!

What a great memory for the Lieb family to have, on top of the great memories that we all will have for that game.