I feel like we learned a lot last night, so I want to update my depth chart from three weeks ago. First I'll tell you my internal debate on how to "chart" this defense. And then we'll get to the depth chart itself.

My main question with the new defensive scheme after last night: what adjustments will be made when facing pass-heavy offenses? I can already tell this is going to be a long intro because my brain already said "well to explain that you have to explain that". So let's back up.

First off, the defense was intentionally basic last night. The staff doesn't want anything on film that Nebraska could use. There's only one chance to keep the opponent completely in the dark, and that's the first game for a brand new coaching staff.

Maybe the best way to explain this is to screencap the very first play. The offense came out five-wide (what?) and the defense stayed in that basic look: 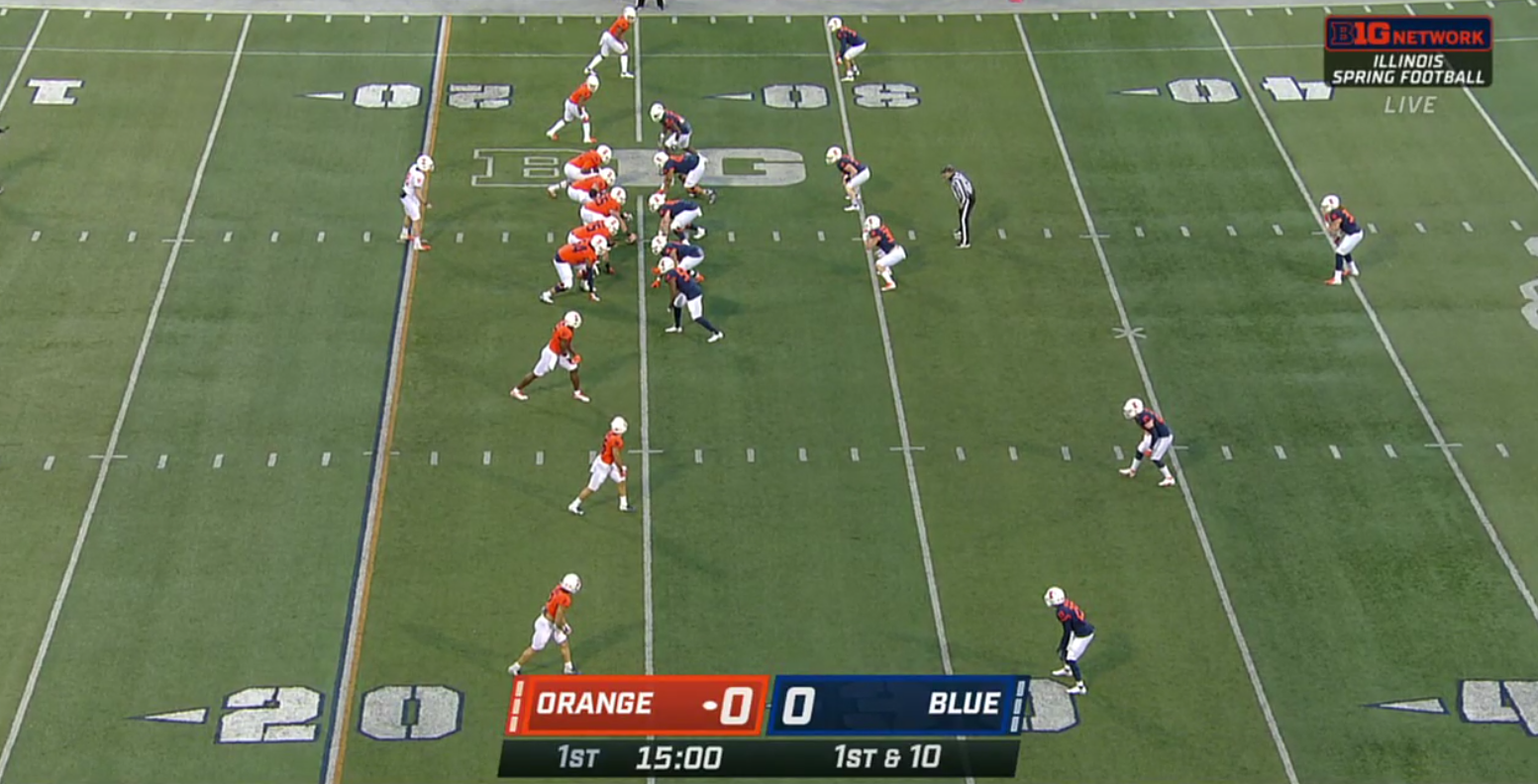 That's kind of an offensive coordinator's dream right there. Five defenders on the line of scrimmage, two "middle linebackers", and four defensive backs to cover five receivers. Obviously there's a thousand different ways to defend this - rush four guys, leave one MLB in the center of the field, and then get six defensive backs out there would be one - but here, it's up to the OLB on the left side (Marc Mondesir, #54, the stand-up end across from Julian Pearl at right tackle) to drop into zone coverage.

Again, there's a dozen different ways to go here. It's possible that we never see this formation a single time in the Nebraska game. All we really know that we know is the thing I wrote last night: position-wise, we showed LOLB - LDE - NT - RDE - ROLB. An offensive line on defense. Four linebacker positions? Nah, more like four defensive end positions. Interior "ends" (Keith Randolph, Jer'Zhan Newton) have to do very defensive tackle-y things. Exterior "ends" (Owen Carney, Isaiah Gay) will rush the passer but also chase receivers a lot.

ALL OF THAT TO SAY, it's hard to chart the defense without knowing how they'll adjust to pass-heavy offenses. My guess is that there will be a four linebacker look which is much more linebacker-y and much less defensive end-y, to use extremely technical football terms. We'll put a guy on the edge there, but he runs a 4.6 40, not a 4.9 40. Might hurt when trying to hold the edge against the run, but would really help when dropping into coverage.

So after changing my mind last night and removing the 12th position on the defensive depth chart, I'm adding it back in. I'll chart the defense with 12 positions. The "extra" position will be "left linebacker" (LLB), and my thinking there is "when UTSA is passing for a lot of yards, we put Calvin Hart over there, not Isaiah Gay, and let him defend the receivers". Again, I'm just talking in generalities, so please keep the "does that mean Gay won't be on the field on third and nine?" questions to yourself - I'm just trying to find a way to chart what I believe will be a lever the defensive coaches intend to pull. So I'm taking guys like Calvin Hart and calling them LLB's (and then anticipating they'll play a lot vs. UTSA).

To the chart. New players for 2021 (recruits and transfers) are in italics.

First off, I'm certain I will change my mind on the linebacker labels four more times before the season. I mean, I changed my mind twice just today. But I keep looking at the roster and thinking they'll want to use some of this linebacker depth (once Hansen, Tolson, Cooper, and Barnes are back). As of today, the most likely scenario (at least in my head) is to have a package with linebackers at OLB, not defensive ends.

In a way, this is somewhat like using Fullback on the offensive depth chart and listing 12 positions. Remember the Wrigley game against Northwestern where we were running all those heavy formations with Jay Prosch, Evan Wilson, and Eddie Viliunas at FB-TE-H? Eddie Viliunas didn't show up on any depth charts, but when we went "heavy", he was a starter. So that's what this is attempting here. "We're going to have certain packages, and these guys are important and should be listed separately".

Until I change my mind on Thursday.

OK, let's get to some other thoughts. Maybe a list is best.

Overall, a lot of this feels pretty set in stone. I'm guessing there's still a 3-for-2-spots battle at offensive guard between Jeresaty, Pihlstrom, and Brown, and the third WR to start with Navarro and Hightower is up in the air, and on defense the question is who starts with Hansen at the other ILB spot (and, I guess, who are the two starting safeties). But everything else seems set. Including, at least for now, Brandon Peters starting at QB.

But once I get finished with my "Check The Tape - Why Deuce Spann Will Win The Heisman THIS YEAR" post, we'll have a real-deal QB controversy on our hands.

You mean why Deuce Spann will put his name in the transfer portal by game 5? Its pretty obvious they are not high on any of the QBs outside of Peters.

Really like seeing some of the pro sets with the easy passes to the tight ends and running backs.

Please explain what you mean by "obvious". That's now how I've seen it, so I'm curious what you've seen.

This is as much to one of your other posts around offensive linemen. They've recruited multiple QBs that are pocket passers and looks like they will sign more than one QB in this class (with 1 committed). I believe they're doing this because they don't like the QBs in the room. Then I watched the game and noticed all the QBs have a hard time getting the ball out on time except Peters. Totally understand the talent difference made it hard on the blue QBs. All this makes me fell like accuracy with getting the ball out your hands on time is the most important skill. Would love for Spann to be able to do it but I think all the other QBs default to running after their 1st read.

The data from the game is insufficient to draw such conclusions. (I was there) What would Williams's stats have been had he started and played the first half for the Orange team? We don't know but we know he performed well for Orange in the small amount of time he quarterbacked them. I don't think you can conclude much about the play of the Blue team quarterbacks, as they were under pressure soon after the snap, and they were looking for 2d and 3d team receivers. I remain guardedly optimistic about our quarterback play come Fall.

I don't disagree, just reading tea leaves. You don't get any credit for predictions if you wait until everyone knows. :)

Not saying he won't play for us - the 7th Alabama safety is generally better than our best safety - but I've backed off some of my excitement after seeing that the "primary backup" reports were not true.

Thanks Robert, you're the best. Except now I have to back off my excitement re: Smith too. :)

I think Pearl is the top competitor for that left guard spot. Bart Miller raved about him unprovoked in his most recent press conference. He also said he wanted to get the best 5 on the field even if it meant moving guys around.

So, at this point the "Beason to WR" move STILL wont likely get him on the field much?