We interrupt this Check-The-Tape to bring you some basketball stat-fiddling. Maybe this should be a new feature on the site. Fiddling With The Stats. "Hey Robert, when does the next FWTS post come out?". I'll need to work on the name.

The thing that sent me down this road was a quick flip through Bart Torvik's T-Rank site. If you're unfamiliar, think of it as a different way to KenPom. On Torvik's site, he always includes projections for the next season. They're not "predictions" - he simply takes the stats for each player from the previous season, uses a formula to project them forward to the next season, adds any recruits or transfers (recruit stats are added based on recruiting rankings), and presto, here's the ranking of all the teams for next season.

The best part of his projections (to me): The Sausagemaker. He has a "rostercast" where you can add players, subtract players, and see how those additions and subtractions affect your ranking. In today's Transfer Portal world, it's a lifeline for me this time of year.

Let's start with the current projections for next season with the roster as it currently stands. From last season, this removes Ayo, Kofi, Adam, Giorgi, and Da'Monte and adds Omar Payne, Alfonso Plummer, and the three HS recruits. The result: #46. Here's the projected stats based on his formula: 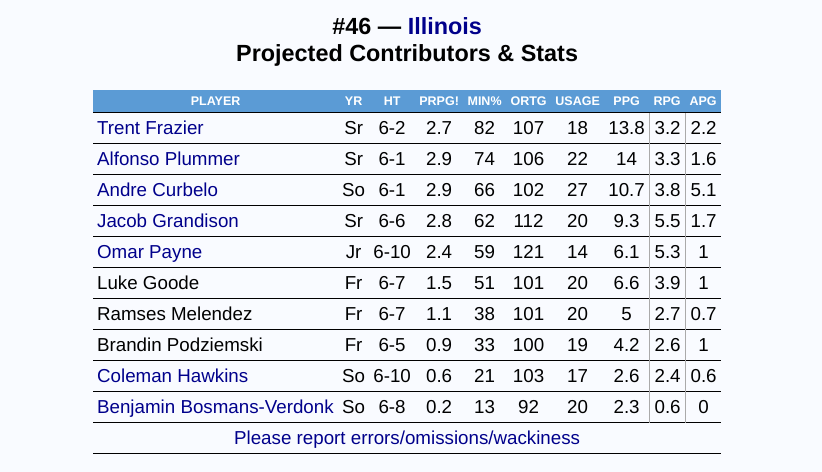 Please remember this is just a formula. Yes, you might think Coleman Hawkins is going to average more than 2.6 ppg next season (I do). But that's not going to affect our national ranking that much. These same assumptions are made of every team. It's just a formula. And yes, there's no Austin Hutcherson on there, but there's really no way for a formula to add someone like that. A D-III player who missed an entire season with a stress fracture in his back? No one knows what we'd get even if he's 100% healthy.

Northwestern is a bit of a surprise (the formula expects Nance, Audige, Buie, and Young to all be double-digit scorers), but overall, that looks about right. Iowa, Rutgers, and Wisconsin take a massive tumble. Illinois tries to hang on without Ayo and Kofi. Michigan brings in the top recruiting class in the country and looks to win another regular season title. Purdue returns everyone and should be top-10 after getting a four-seed this season.

Obviously, these things will adjust if more players transfer-out or transfer-in. Let's get crazy and dream about EJ Liddell's visit to the Illinois spring game being more than just "I wanted to watch Keith Randolph play football". Switch EJ from Ohio State to Illinois and Ohio State drops to 23rd while Illinois moves up to 22nd.

That's fairly far-fetched, of course. But we can still play with the formula to look at other scenarios which are more realistic. First, let's look at us being 46th (and 8th in the Big Ten) as the roster currently stands. I think that's... correct?

You lose Dosunmu, Cockburn, Miller, Williams, and Bezhanishvili. I don't care who you are - any team losing five of its eight players from the rotation, including your first-team and second-team All American, is going to drop significantly. Getting Trent back helps, and adding Plummer & Payne helps, but still, no Ayo, no Kofi probably means we fall down to the bubble.

Right now the roster is at 12 players: Frazier, Grandison, Hutcherson, Plummer, Payne, Curbelo, Hawkins, Bosmans-Verdonk, Lieb, Goode, Melendez, and Podziemski. Trent technically doesn't "count" since he's a Super Senior, so we could still add two more players because the roster could push to 14. If Da'Monte were to return, technically, we could push the roster to 15.

So let's play with some of the scenarios. I'll just run the numbers on The Sausagemaker and show you what it spits out.

The big one: say Kofi pulls out of the draft and returns for another season in Champaign: 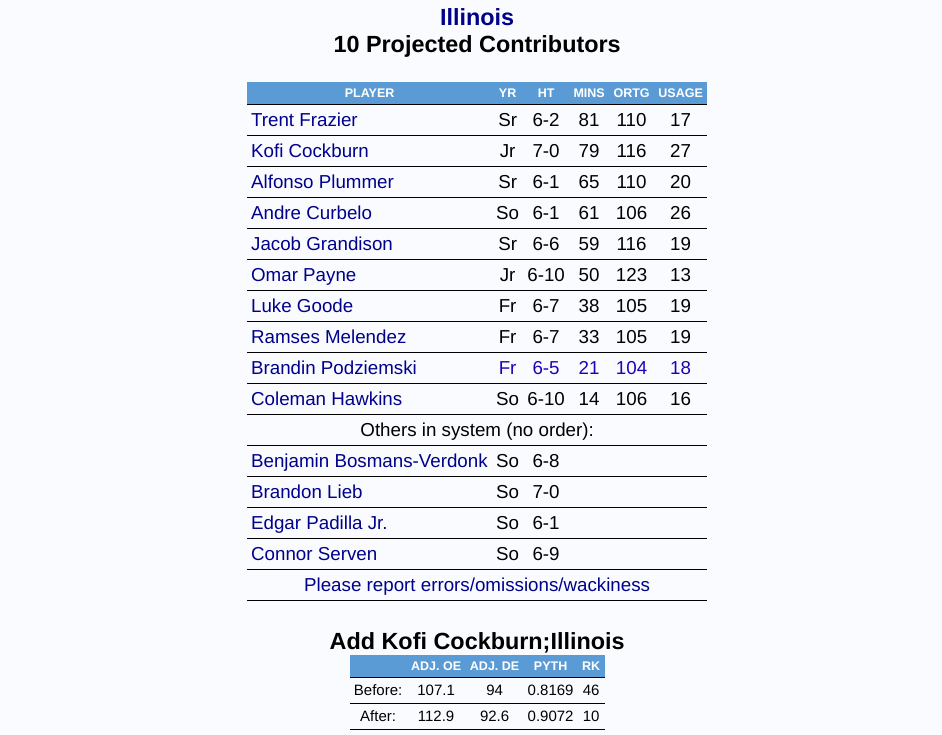 Let's look next at an ideal scenario. Everyone returns. Kofi pulls out of the draft. Adam Miller pulls out of the portal. Da'Monte Williams decides to return for one more year. What does this look like if everyone were to return? 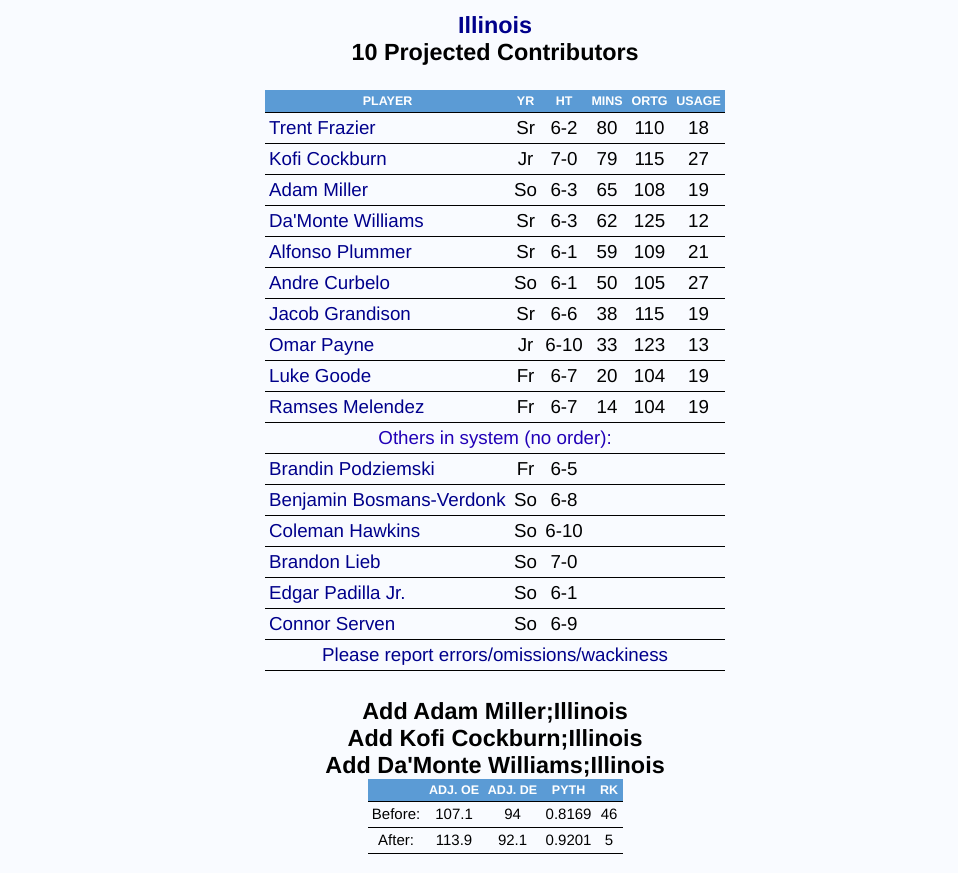 5th nationally, right there with Michigan battling for the Big Ten title. Again, sounds about right. Besides Da'Monte and Trent getting a bonus year (in that scenario), this was the plan all along. Ayo is gone, but it's a Curbelo, Miller, and Kofi team.

But while this is "possible", it's not likely. I'm in the camp where adding Alfonso Plummer meant that Miller was out. So what does it look like if it's just Kofi (dreaming) and Da'Monte returning? 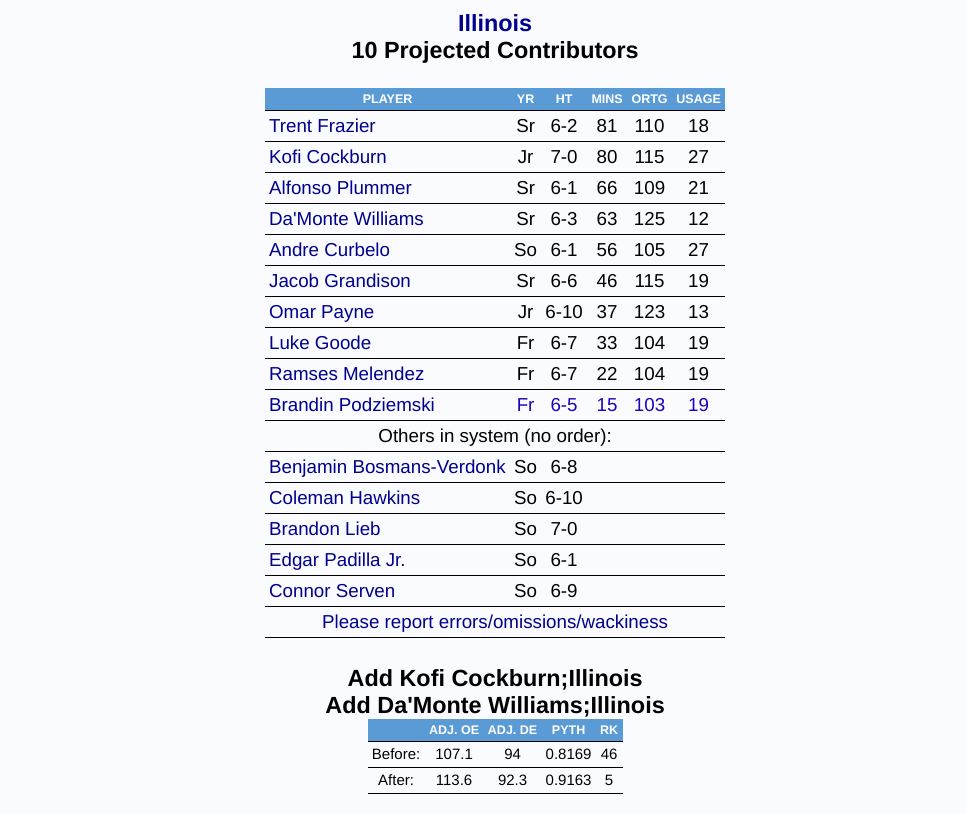 Hmmm... 5th with or without Miller. Interesting.

Well, of course, Kofi is probably most of the boost (possible All American and whatnot). So what are the numbers if Da'Monte were to return but Kofi stays in the draft? 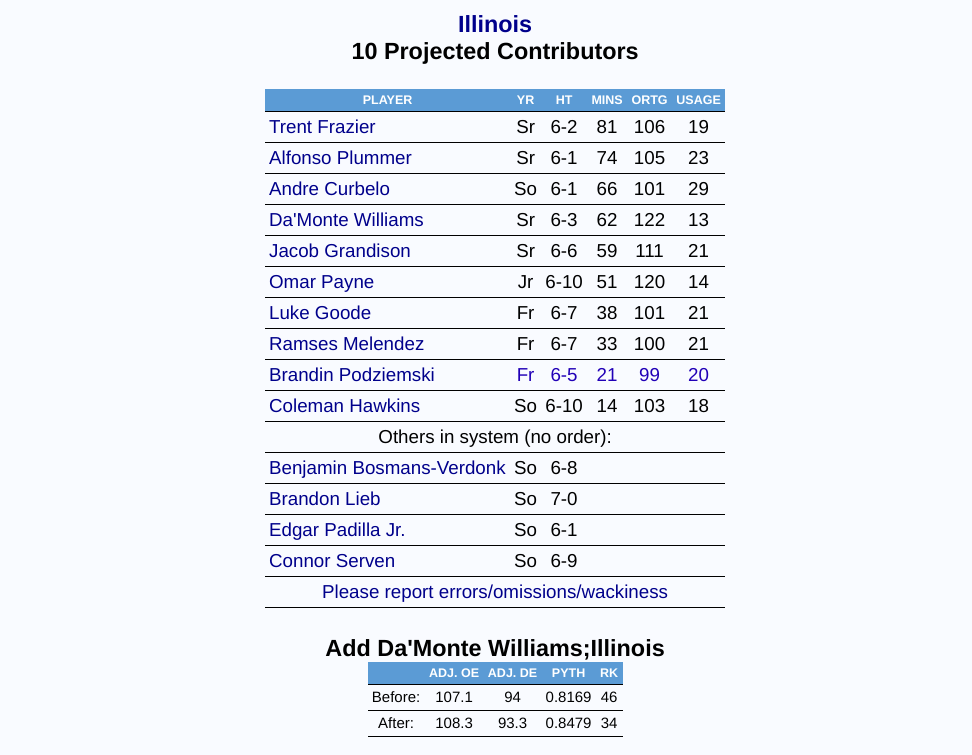 So from 46th to 34. Again, that feels right. Not nearly the boost that Kofi would provide, but getting a 5th-year senior guard who has started games all four seasons (and can defend the four) might be a "move us safely off the bubble" kind of a thing.

Let's try one more scenario. We'll say that Miller won't return, Da'Monte graduates and moves on, and Kofi heads off to professional basketball. But we do make one more roster move, bringing in a frontcourt transfer. Let me go find a possible transfer or two.

I saw this tweet saying that we reached out to Vandy's Dylan Disu. Let's run the numbers adding him (and only him). 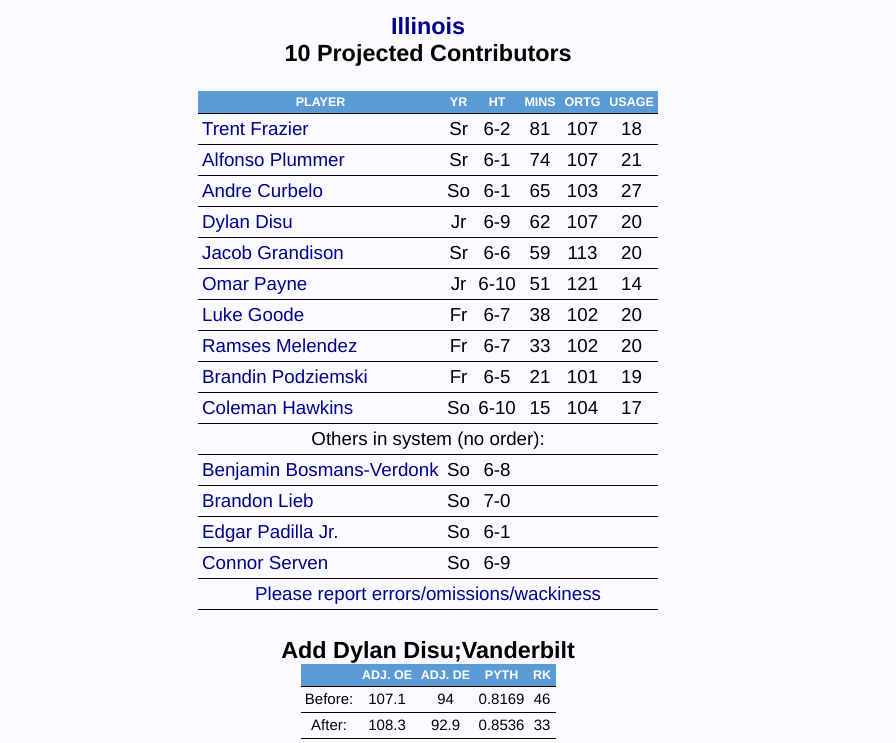 Hmmm... what if I add some random low-level big in the portal? Let me search for some bigs. OK, some guy named Collin Smith announced yesterday that he's leaving UCF. What if we added him? 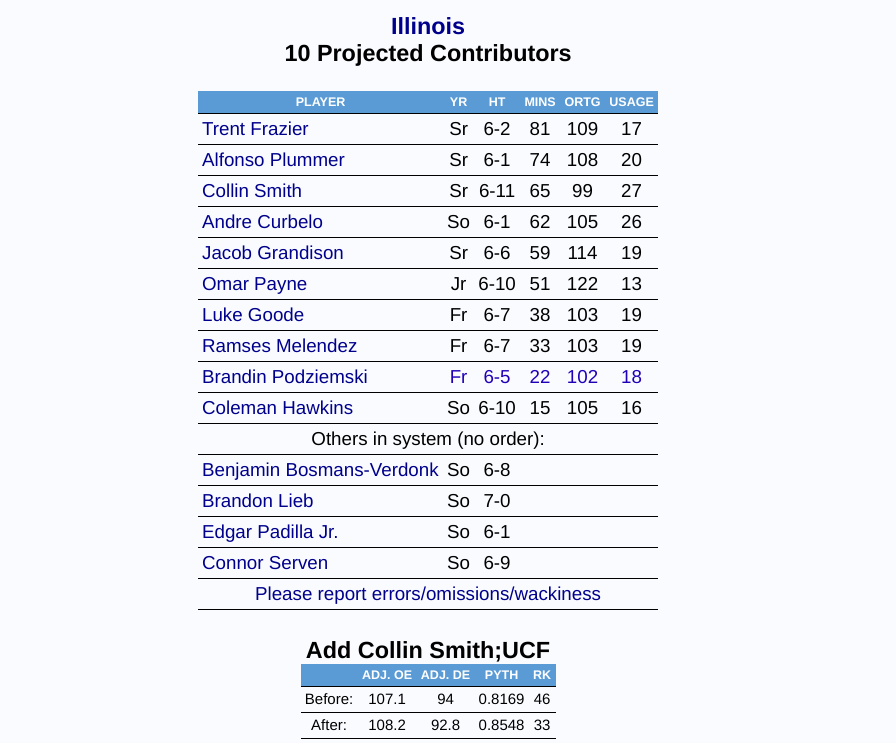 OK so yeah I get the point now, I think. This formula is screaming one thing: "Illinois really needs another big. Anyone will do. With Kofi and Giorgi gone and only Payne coming in, there's still a large hole in the middle. The best thing Illinois could do, short of somehow getting Kofi to come back for one more year, is land another instant-impact big man from the transfer portal".

At least that's what I think I heard the formula say. Not sure. Don't speak formula.

I know you didn't close the browser window on this rosterpocalypse site after hitting publish. I look forward to several more posts as you keep iterating through reasonable and unreasonable scenarios. Do they have a similar site for coaching staffs? :)

Seems about right. Another body at big gets us off the bubble, a good body at big gets us hovering around the top 25, and Kofi puts us in business. Probably not as good as this year, but still a shot to go deep in the tourney if we don't hit a kryptonite team (someone who can scheme Kofi out of the game)

Assistant coaching shake up could blow all that up. Considering an article on that?

Mostly because I’m not sure how an assistant coaching shake-up would “blow all that up”.

Where's the rec button when you need it

This is fantastic. One of the most informative articles I’ve seen here.

Another way the projected contributors could change: (not naming names) an assistant coach goes to another school - the school has a need and a star athlete wants to stay with that coach so goes through the portal and is accepted by the other school. Not ethical in my mind but I think the current transfer portal does open up a way for some schools to raid other schools by hiring asst. coaches. Much like hiring high school coaches with links to certain players.

So, how do we gently let Kofi know that second rounders typically do not make rosters and that he has to come back and be THE MAN to assure a first round selection in 2022?

even the 2nd round isn't a sure thing at this point. combine will be huge for him

Here is another possible roster change. DW comes back and we get Tre Mitchell. That moves the Illini to #15.

Bottom line is DW and any decent transfer big probably gets into top 25 and a real good big gets us into top 15 to 10.