This is now the fifth post I've slid above "Spring Mailbag IV" in the queue. I'm pretty sure that article is now asking "is it me? did I do something wrong?". No, little mailbag post. I'll finish writing you very soon. There's a few news items to cover first. I promise we'll get together very soon.

In what seems like the longest-rumored thing in Illini history - that tweet from the other Kentucky assistant where he used the word "Chin" and capitalized it as a hint was 11 days ago, and that was after two weeks of rumors - Orlando Antigua is returning to Kentucky and he's taking Chin Coleman with him. I always wait for press releases because I hate the world of SOURCES ARE SAYING so much, and now that we have a press release, here are my thoughts:

This is weird, right?

I understand Antigua. He was at Kentucky, he got a head coaching job at South Florida, he was fired after an academic scandal at USF, he rebuilt his reputation at Illinois, and now he's back to Kentucky. That makes sense. And I guess, given our success the last few years, Chin Coleman getting an offer from a blue blood makes sense as well. He started with the Mac Irvin Fire, was hired by Tim Miles at Colorado State, had a brief stint with Miles as a "player development" staffer at Nebraska before getting an assistant job at Bradley, and then spent three years at Bradley, two at UIC, and then four at Illinois. One more step as an assistant at Kentucky makes sense before maybe landing that head coaching gig.

I mean, look at the official visitors Underwood hosted at Oklahoma State his only season there. Trae Young. Collin Sexton. Amauri Hardy (averaged 15 ppg at UNLV and transferred up to Oregon). Bourama Sidibe (starting center at Syracuse this year who missed all but two games this year with a knee injury). There's too much of a track record here with Underwood visit lists for me to think that the player identification fell on Antigua and Coleman. And Kentucky didn't hire Underwood.

My point: Kentucky hasn't had a recruiting problem. They've had a program building problem. They haven't mixed any Da'Montes in with their Ayos. They haven't established an identity since 2017. The last four Kentucky teams have been freshman all-star teams, and these freshman all-star teams have gone 48-23 in the SEC. He won 81% of his SEC games his first eight years at Kentucky and then 68% his last four years, bottoming out with this year's 9-16 (8-9). They've now added three transfers (CJ Frederick from Iowa, Oscar Tshiebwe from West Virginia, and Kellan Grady from Davidson) so they're obviously acknowledging that freshman all-star teams aren't the way to go in today's college basketball world and are moving in a different direction.

So maybe they're wanting to hire Orlando and Chin to walk them through "here's how to mix underclassman stars with seniors with transfers"? Like I said above, when you hire two assistants from the same place, it's fairly obviously a "we want some of what they have" move, so.. what is it we have? Kentucky can land any player they want, with or without Antigua and Coleman. They had the #1 recruiting class for 2020 and went 9-16. They're not hiring the architect of the Illinois rebuild, so... what is it they're hiring?

Maybe it's not architect. Maybe it's contractor. Let me sum it up this way:

As I said on Twitter, my reaction here is not "who needs 'em". I've said dozens of times that this was a complete gut-job rebuild - Underwood tore everything down to the studs - and now his top two subcontractors have moved out of state. He's gonna have to find another drywall guy and another electrical guy, and those hires will be very important. These guys were very good at their craft, and now Cal will try to update the finishes at Kentucky after last season's, uh, flood damage.

But it still seems odd to me that Cal thinks he needs a drywall guy and an electrical guy. Their drywall looked fine, and the electrical passed all code inspections. Wasn't plumbing the problem?

Donny, you're in your element!

I answered a question on the Slack channel about our wide receivers this fall (specifically, I was asked to rank the receivers based on total number of catches this fall), and I put Donny Navarro #1. There was then some discussion - I'm trying to be vague here because I don't want this to be seen as an "well then I'll show that guy" response - about whether Navarro was really #1 receiver material. If I'm ever defensive about anything in life, it's Illini football players not getting enough respect (seriously, it's never personal against the person sharing their opinion - I just get really, really defensive at times because I'm way too "these are MY GUYS" about my teams). I mean, in August of 2017, after he had only played seven total quarters of college football, I did a thread of my five favorite Chayce Crouch gifs. I will defend pre-shoulder-injury Chayce Crouch to this day.

(I should note since I've gotten a few tweets and emails about it - when you hear me say "the Slack channel" that's a private Slack for IlliniBoard subscribers at the "Orange" or "Seventeen Club" tiers. No, it's not some den of "I'm hearing good things about...." #takes. I hear nothing. It's just the place where we can interact with subscribers and remain "on call" for any questions they may have. If you're subscribed to one of those tiers and never joined the Slack - you don't have to interact, you can just lurk in the background and read - just email me and ask for a refreshed invite. The invite links expire every 30 days so the one you received when you subscribed has likely expired. Just email me and I'll send you a new one.)

Anyway, since I get all MUST PROTECT about this roster, here's a string of "nobody gives Donny Navarro enough credit" gifs. Let's call it the Donny Navarro Appreciation Thread.

Let's start with a catch from a scrimmage this spring:

Hold on - let me go grab the three photos of this catch that were put out there. 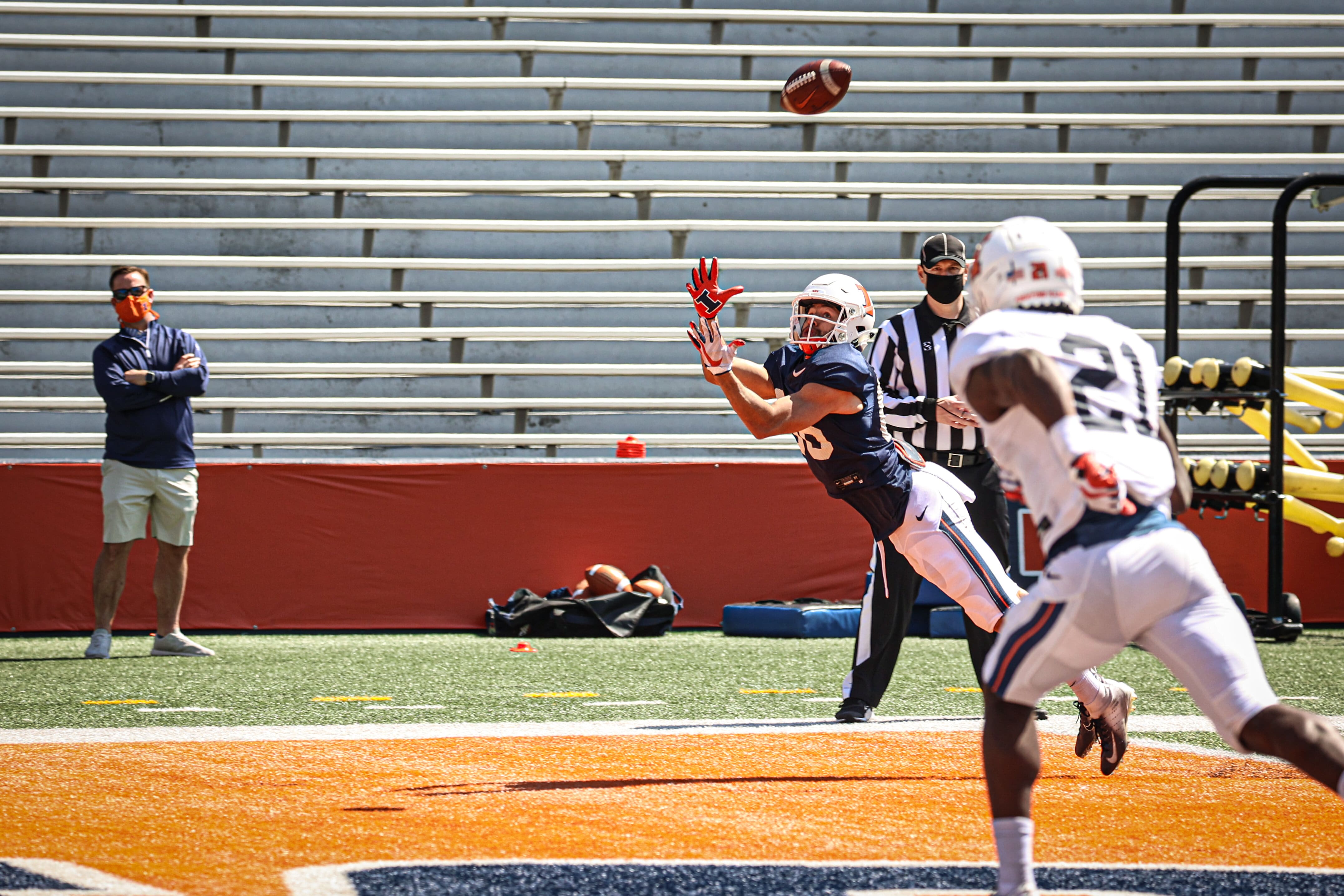 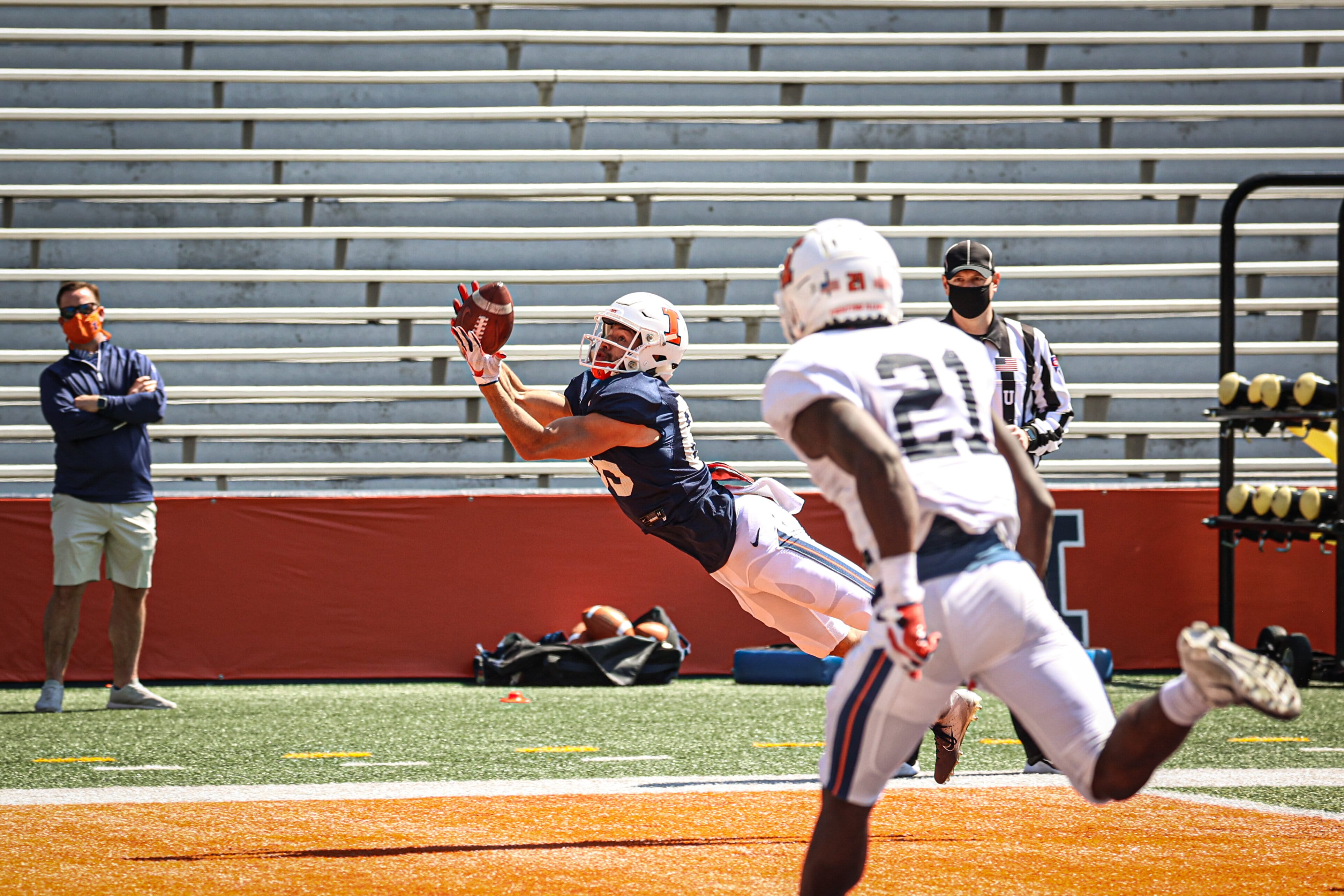 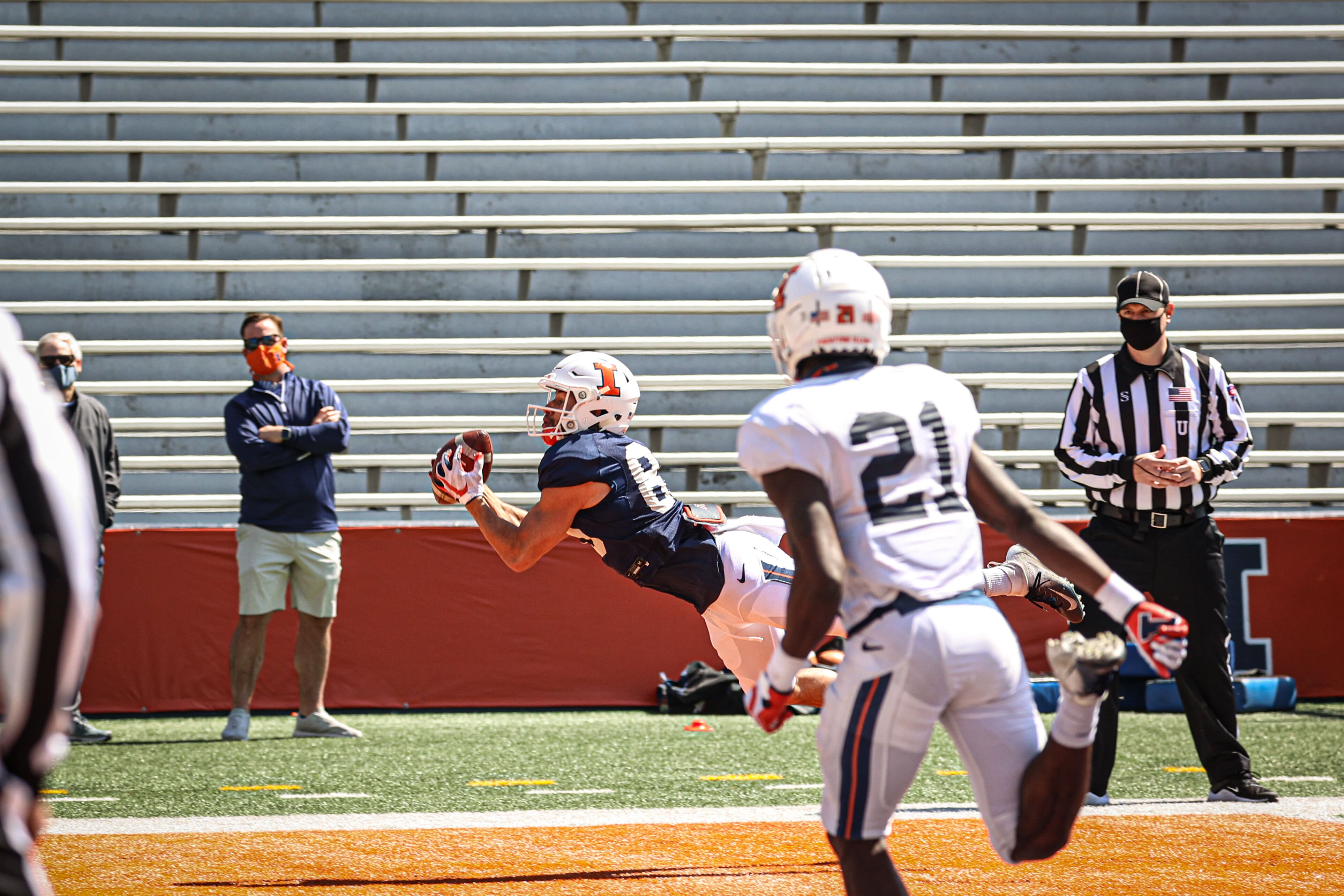 Given how little information we got this spring (practices only open to the media for 15 minutes each day), I should have made a bigger deal about that catch at the time.

And then we'll go back to the last few seasons. Everyone remembers this move against Wisconsin in 2019:

But do you remember this catch against Rutgers a few weeks later? 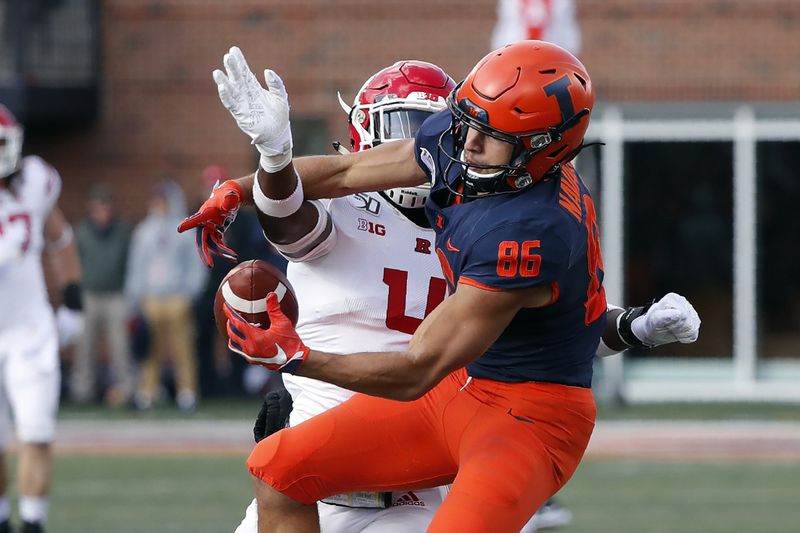 And what about this catch in the Redbox Bowl?

And I saved the best for last. Last year against Nebraska:

CHET IS A DAMN WARRIOR

It's January 2008, the week after the Rose Bowl. On the IlliniBoard Basketball Forum the fans are discussing the latest hoops loss - a home loss to Penn State to drop the team to 8-7 on the season. Chester Frazier, once again, is getting dragged. He's not Dee Brown, and he's not Deron Williams, and he's apparently going to pay for it for his entire career.

But he has a Great Defender on this message board. Some guy who won't start his blog for another year but is honing his skills on the IlliniBoard fan forums. Some guy who goes by Orange Roughy (I'm talking about me). Roughy has his tennis racket out and he's sending every Chet insult back over the net with the same response:

"Chet is a damn warrior."

My point, at the time: Chester Frazier is not to blame for The Great Fall Of Illinois Basketball. No, he's not some huge offensive threat, but he's playing to 99.7% of his talent level, and that's all you can ask of a player. If you want to get mad about The Great Fall Of Illinois Basketball, point to the coach who missed on the recruits, not the Plan B recruits hustling their tails off.

And Chet was more than just hustle. He was one of the best defensive players we've had the last 20 years. One more time in case you think that was hyperbole. He was one of the best Illini defensive players the last 20 years. Defense is often effort (see: Frazier, Trent), and Chester Frazier gave max effort. He was a damn warrior.

So if this report is true and he's returning to Illinois as an assistant coach, well, I'll be quite excited. I'll save the rest for an article if and when his hire is announced. But for now, let me just echo what I tweeted when he was hired as a graduate assistant back in 2010:

Editor's note: upon publishing this article, I checked my email and saw the press release from nine minutes ago stating that Chester Frazier has been officially hired. Time to start on that article.

I'll take the over on the Chester Frazier is the new IL Asst. BBall Coach article coming out before the Spring Mailbag IV article . . .

Obviously, Chin and Antigua are very good assistant coaches. I understand why Kentucky wanted them. Antigua especially with all of his recruiting connections, having coached next to Cal, his ability to coach big men, and Chin being well respected in Chicago. I think it is also a power play. They showed they can go into an up and coming power-5 program and take whatever they want, whenever they want. That's what really bothers me. They took our lunch money and there's nothing we can do about it right now. Where can we order some schadenfreude?

The Chayce Crouch Fan Club. Incredible. I thought I was the only one.

Navarro and C. Frazier epitomize the Illini grit, toughness and determination. Your post reflects all of that well.

You were right about Donny and you are right bout Chet.

How does a Donny Navarro article get written without the nod to the Wisconsin coach yelling, upon said Touchdown, "Who the (expletive) is Donny Navarro???!!!"