See, you're all "Robert, you're two months late with these", which is totally true, but I see it as inviting verbal commitments this weekend. I was hoping to get caught up before the next verbal comes along, but maybe by NOT getting caught up it means there's a better chance of a verbal happening this weekend because as we all know when you almost have the inbox clear another email arrives.

Let's start with that picture up at the top. Can you find the lineman who got a P5 offer? Yes, it's #77. This is not an insult to #62 or #86 - I'm just saying that sometimes, football recruiting is very, very easy. It's not just weight, it's not just height - there are body types that can play football in college and there are body types who can never play football in college. It has nothing to do whether a player is "good" at football.

To me, it's a step beyond "tall guy plays basketball". That's a lot of it for basketball, but for linemen in football, it's maybe 85% of everything. If you're a super-sized human - your neck is over 20", you can't even get a suit jacket in the low 50's over your shoulders, your hands are catcher's mitts - then you can be a football lineman.

I've told this story before, but when some offensive linemen are being recruited, it's uncomfortably "90% body and frame, 10% film". Players will tell stories of coaches checking their facial hair development when they were 16. If he doesn't have stubble yet, he's still growing and developing. If his cheek is stubble, he's about maxed out on his frame and make your offer decision with that in mind.

We see this with all sports, of course. Basketball coaches estimating whether a player's growth plates are still open. Wrestling coaches looking for a very specific "compact" muscular frame (to carry the most strength with the least weight). There's physiology everywhere.

At the top of the list, in my view, is the football lineman. You're just trying to find dudes like Whitenack who cannot fit through a normal door: 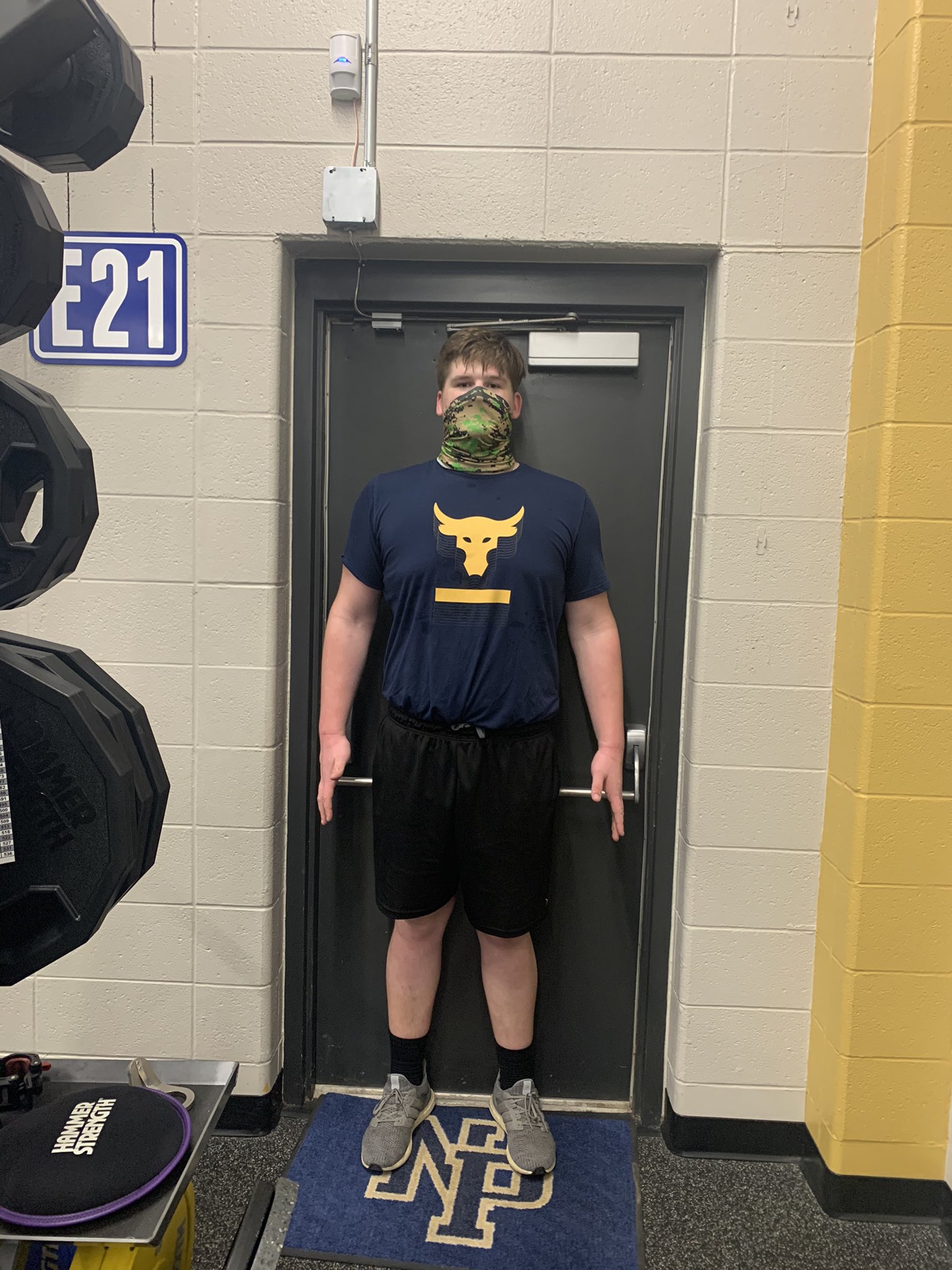 And who, when standing with a group of large men, looks like a very large man: 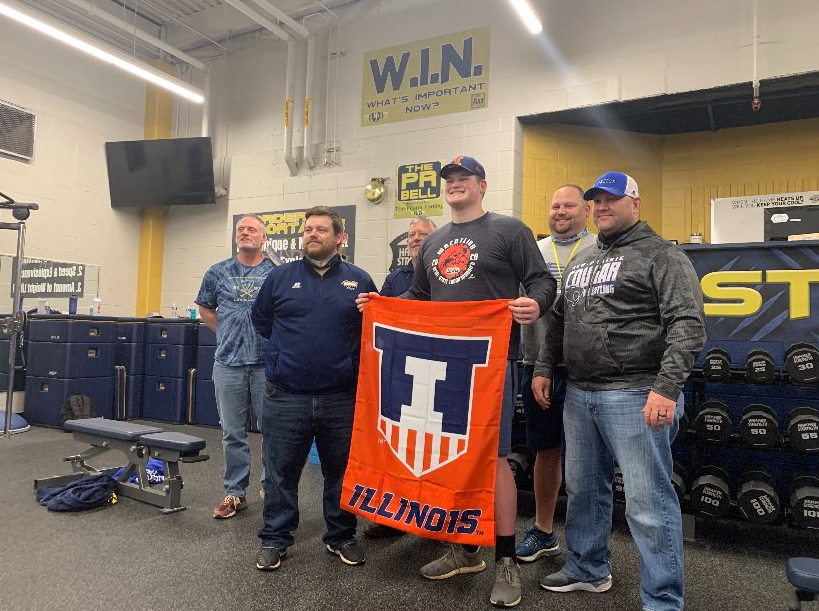 Now, that comes with reservations for a lineman. If you're 6'-7", you're probably going to play offensive tackle. And if you're going to play tackle, footwork is everything. You can get away with being a rumblin' bumblin' stumblin' guy on the interior, but for tackles, the footwork is necessary. That little jab step thing in pass protection is everything.

Can he do that? We shall see. I watched a lot of his film (his junior film is 25 minutes long), and it's mostly stuff like the gifs below. Which I'll describe as "massive guy drives someone backwards until he pancakes them".

One thing that's noticeable is that he's not exactly the "fastest" lineman (which makes sense, given 6'-7" and 300 lbs). He's more the plodding type, which isn't an insult. Here he's staying off the other guy's shoulder and looking for someone to punish, but I think it shows how he moves:

Offer-wise, there's no other P5 offers besides Illinois. His Twitter shows a lot of visits to games the last few years - Wisconsin, Notre Dame, Iowa - but none had offered by the time he committed to Illinois. He did commit on April 16th, so that's fairly early (in a normal year), so maybe more offers were coming. But, the information we have is "Illinois was the only P5 offer".

I did notice that his 247 profile says he's visiting Cincinnati in a few weeks. So perhaps he's not 100% set on Illinois just yet. He's visiting here this weekend, though, so maybe this visit locks him in 100%.

I'm obsessed with my .25 Cruises lately, so I'll continue on that train. The best thing Whitenack has going is that you can't teach size. The other offers aren't there, though, and the film gives me a few footwork pauses, so I think I'll land at...