I think it's fair to say that Lovie Smith chased athletes and wanted to sort out the football later. Some of those players, like Dalevon Campbell, were simply track athletes in high school and Lovie wanted to teach them the football side. Others were football + track guys who were ranked a little lower but had that track speed. Lovie recruited players like that as high schoolers (Kyron Cumby) and as transfers (Khmari Thompson).

But he missed out on two such players who could have made massive impacts. Tutu Atwell was down to Illinois and Louisville, he chose Louisville, and then he went on to be a first-team All ACC wide receiver and a second-round pick of the Rams in this past draft. He was a high school quarterback (but more of an athlete than anything), was listed as a 2-star when he visited Illinois in late July that year, his Crystal Ball went to 100% Illinois, and then he slipped in one more visit to Louisville and picked the Cardinals.

Illinois was the first P5 offer for Kamren Curl as well, and before other P5 offers came along, I was convinced he was Champaign-bound. Texas Tech offered a month later, and it came down to Illinois vs. Texas Tech that summer, and he picked Texas Tech. Then he blew up during his senior season that fall, got Nebraska-Oklahoma-Arkansas-Texas offers, and eventually committed to some guy named Bret Bielema at Arkansas. He was picked by the Washington Football Team in the 2020 NFL Draft and then made several All Rookie Teams last fall as a starting safety for Washington.

That's the hope when you make the focus of high school recruiting "grab an ATH or nine and then sort it out later". You're not going to hit on every one, but maybe you can find an Atwell or Curl and that makes it all worth it. The best way to describe the concept is probably with Kamren Curl. During the spring and summer recruiting period, only Illinois and Texas Tech had discovered him. So they almost slid him in under the radar. Then he makes the radar, half of the Big 12 and SEC offer, and now you have no chance. So if you want to land some plus athletes without losing them to the SEC, go search the hidden corners of high school football. Maybe there's a high school quarterback like Tutu Atwell who would make a great college receiver.

I believe that's the idea here with Asthon Hollins. He transferred from Montgomery High School in Semmes, Alabama to George County High School in Lucedale, Mississippi in the offseason. I looked up the enrollment at George County HS, and US News tells me it's 1,051, so about half the size of his high school in Alabama. And Maxpreps tells me that George County went 1-8 last year, so it's not like he's joining some football hotbed which has college coaches swinging through every year. This would be a "turning over rocks to find hidden athletes" kind of thing. His Twitter says we were his first and only offer, so yeah, going for the hidden gem here.

I was curious why he left Alabama for Mississippi, so I did some school district digging. Turns out the two high schools are about 20 miles apart as the crow flies: 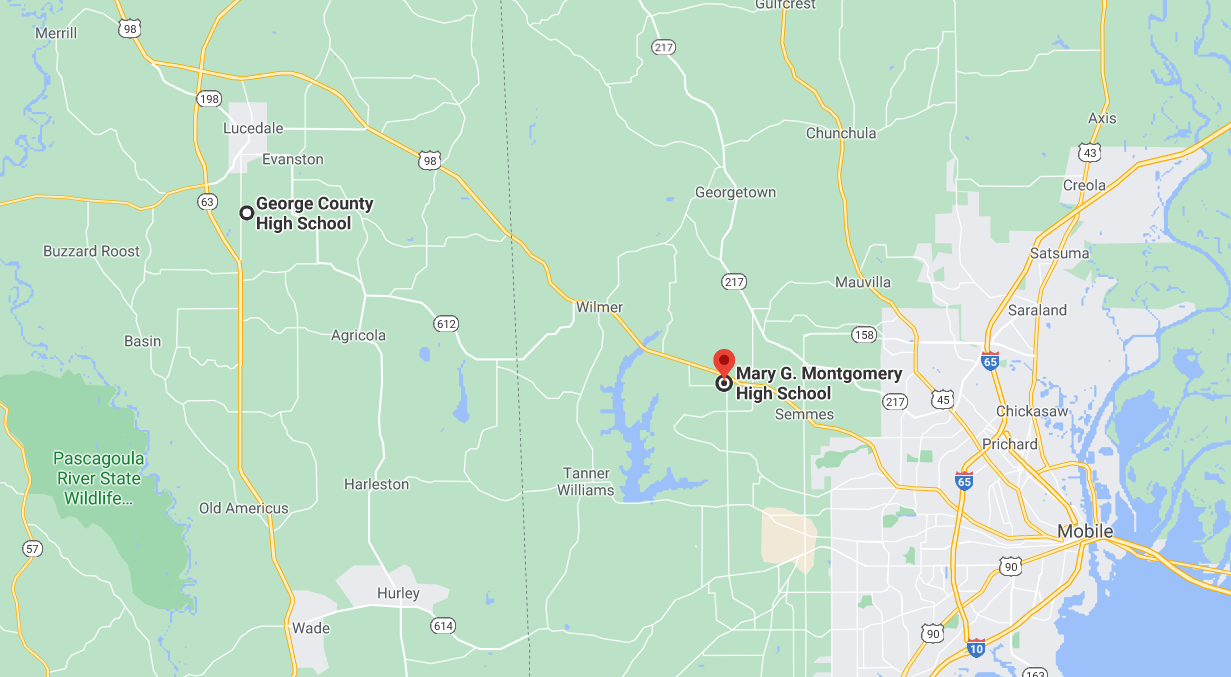 So that makes me wonder about the school districts. Do both districts perhaps extend to the state line?

The internet can tell you anything, and here the internet told me that yes, the two high school districts both extend to the state line:

His old high school in Alabama: 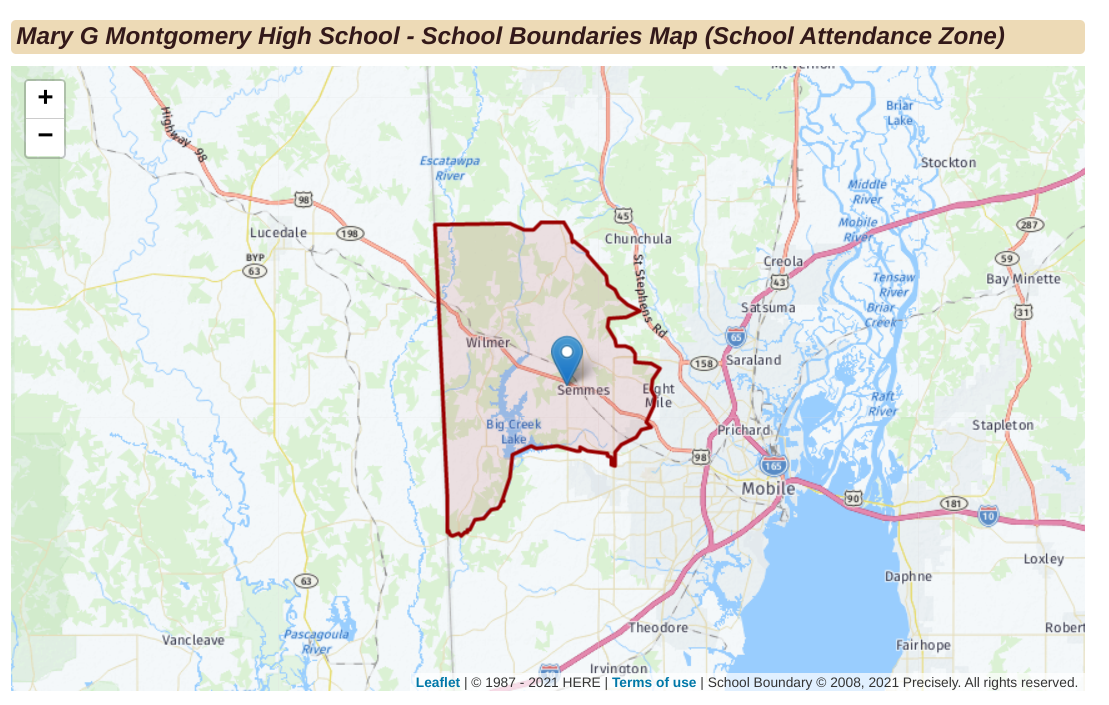 His new high school in Mississippi: 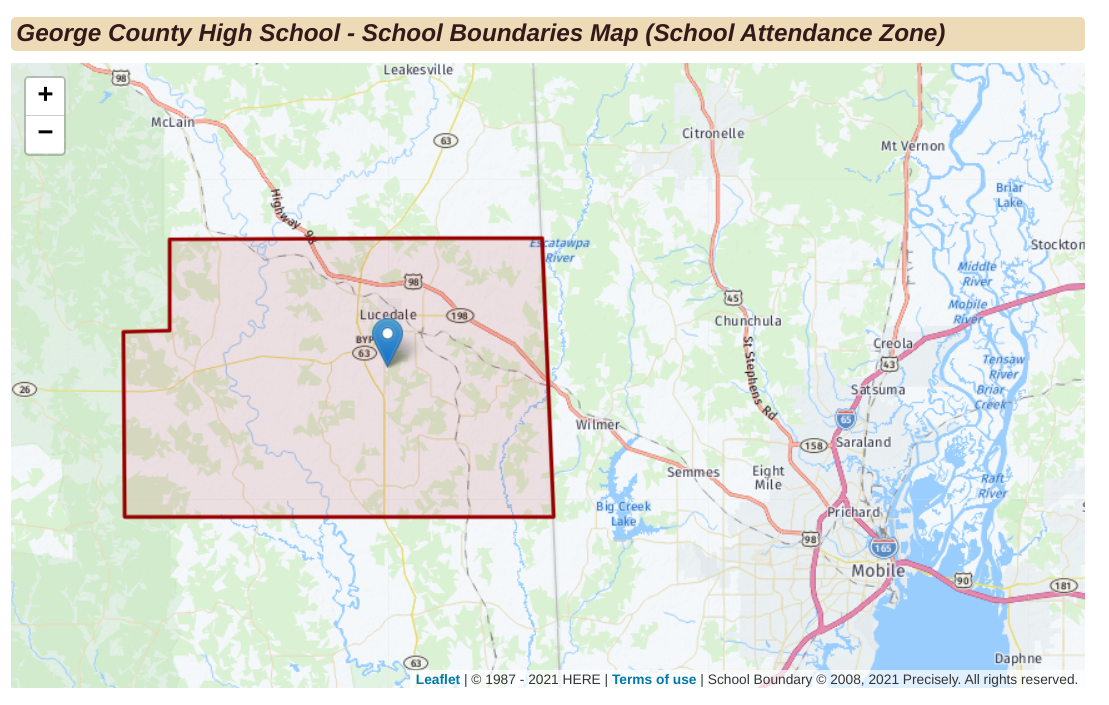 So yeah, his family might have moved 50 yards across the state line and that would move them from one district to the other. This was basically a switch from Hononegah HS to Beloit Memorial HS. You never knew LLUOI posts could be so geographic, did you?

Anyway, football-wise, there's not much to evaluate here. It seems very simple. High school quarterback who had no other offers is quite athletic and might make a great college wide receiver (or maybe even a free safety). At this point, no other schools seem to think that, which is why he has no other offers, but the staff believes they uncovered a hidden diamond.

I'll cover two things that were texted to me in various group texts I'm part of.

I'd agree with that one. Similar frame and running style. McGee was joining an offense that depended on dual-threat QB's, so he verballed with the thought of playing QB in Champaign, but when I picture Hollins at receiver I'm guessing it looks a lot like McGee at receiver.

2. "He ran a 4.3-something forty at a satellite camp and that's why we offered".

I heard this from two different group texts, so it must have been published somewhere. I'll just say that not knowing anything about it (or where it occurred), I'm quite skeptical. Satellite camps are often attended by dozens of schools. You'll see coaches there wearing Mississippi State football gear and you'll see coaches wearing Nicholls State gear. Sometimes there will be D-II and D-III schools there as well. When a player performs well, they'll often get 13 offers the next day from several levels of football. Maybe only two are P5 offers, but they'll also get Louisiana-Monroe, Lamar, and Wofford at the same time.

For Hollins, if he ran a laser-timed 4.3-something at a multi-school camp, he's going to probably get 10 offers from small schools immediately. Bigger schools might wait to evaluate him and see what potential position fit there might be on their roster, but Lamar is going to offer sight-unseen.

I'm flying blind here - I don't know who timed the 40, or what camp he ran it at, or how many schools were in attendance - but whenever I hear an eye-popping 40 time at a satellite camp followed by one single offer, I get skeptical of the 40 time. Minnesota's Rashod Bateman ran a 4.41 at the NFL Combine. If this kid is running a legit 4.3-something, then we're going to have to fight off 15 Power Five schools in the next six months.

And I'm hoping that happens. I'm hoping this is a big discovery. I'm just... skeptical based on the information I gathered.

At the end of his junior film he does show some WR highlights. Here's a few I gif'd:

On this one, even though the camera gets cut off by the pressbox window immediately after he catches it, you can see how the staff might see this QB as a receiver:

Here's another "yeah, I can see it". You could convince me that this is Eddie McGee wearing that helmet and jersey:

And this one shows him tracking a sideline pass and winning the one-on-one battle with the cornerback:

I don't think any of these clips are "wow, he's a future college star" (somebody screencap that for when he is), but they do help me understand that he could be a high school WR. And if he really does have 4.3-something speed, then we're absolutely on to something here.

I checked ESPN's recruiting rankings when I started to assemble this post but did not check today. Well, at some point (maybe today?), they added a rating for Hollins: a 77 rating (highest in this class so far). Their 3-star ratings go from 70 to 79, so he's a high 3-star in their evaluation. #47 ATH recruit nationally.

So he's gonna end up somewhere around .8500 in the Composite rankings. 20 minutes after posting and I already know I'm going to regret my Tom Cruise rating.

This is the good way to regret a TC rating. . .

As a proud Hononegah grad, thanks for the shout-out!