My shirt is supposed to arrive tomorrow. I wrote about my shirt from high school, some reader found an old one online, and tomorrow I'll be in possession of the shirt I wore my entire sophomore year of high school: Awesome Illinois Basketball. That kinda fits right now.

I mean, the shirt doesn't fit. The size for sale online was a large. This one will go on the wall, not the body. OK maybe one Farley photo and then up on the wall.

But the slogan fits. I hurried to the mall in 1989 to buy the shirt because Brian wore it to school. He told me he bought it at that one store at St. Clair Square (I think it's a David's Bridal now), so I had to get one of my own. At the time, Illinois was #4 in the polls, and as a 16 year-old, I could not wear enough Illini gear. The Flyin' Illini had captured the attention of college basketball, and the "hey, that's my team!" was impossible to resist. Especially when you're 16.

That feeling then more or less remained for the next 18 years. Awesome Illinois Basketball. Bruce Pearl screamed "NO FAIR" like a 6 year-old and tried to destroy it with his toy hammer but it was quickly re-assembled in the late-90's. From 1990 to 2007, Illinois missed the Tournament only four times: 1991 and 1992 because of Pearl, 1996 when Henson retired, and 1999 when Kruger pushed the full reset button. Other than that, Awesome Illinois Basketball.

I guess I should show you the full shirt since it's cropped in the banner above. This is the picture I have of it. I'll probably be outside waiting for the UPS guy tomorrow. 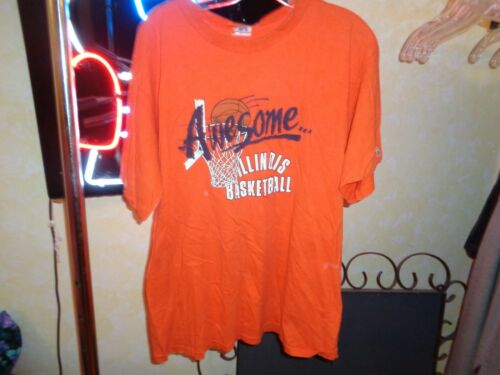 It's so very 1989. Some girl called it "rad" when I wore it, and that's enough to put it in the "Monday-Thursday this week, then Tuesday-Friday next week" rotation as a sophomore in high school. I probably learned how to do laundry because of this shirt.

Now? Now it's back. It's so incredibly back. List time.

That last one deserves several paragraphs. Well, and the first one. And maybe the fourth. I'll start with Underwood.

Maybe it's just the wisdom that comes from having worn an Awesome Illinois Basketball shirt in 1989 (actually, it's just the cynicism plus "I just don't have the energy anymore"), but you won't find a single example of me flipping out at anything that happened this offseason. Go check. I haven't deleted any tweets or any articles. I've held one consistent message: Underwood is navigating this so well.

Here's some of the things I've said:

His point, paraphrased: these are the benefits of a season like this one. It's tough out there, and a Transfer Portal world is so different from what it was 5 years ago, so you have to stay on your toes. But it's much easier to navigate now that we defined "Illinois Basketball".

I also asked this question a few weeks later and got another pitch perfect response:

If you don't have time for 2 minutes and 15 seconds of an answer, Underwood flips the switch at 0:57 and makes a fairly bold statement about how he views losing three assistants in one offseason.

I cannot remember an example of an Illini coach handling a tumultuous offseason so well. A friend once described Underwood's personality as "Texas oil man" and I think that fits perfectly. He just J.R. Ewing'd this entire offseason. (Told you I'm old.)

Lose three assistants? Look directly at the camera and say "I'm gonna go do it again" (actual quote). Lose transfers? Bring in other transfers. Kofi in the transfer portal? With a camera shoved in his face at a golf outing say "Kofi is our player until he's not." To steal a term from 30 Rock, he's Reaganing right now.

You're at "lock up Underwood for at least eight years" at this point, right? You should be.

What was the other thing I was going to cover in more detail? Oh, right - Kofi. Let's close with that.

Well, it used to happen to us. Used to happen all the time, actually. And then it went away. And now it's back.

I sense another T-shirt choice being added to the Illiniboard/4th & Kirby line up is coming soon!

I like the assistant hires and Underwood's continuing efforts to sign every lefty in existence, but Kofi staying makes this all look significantly better. Otherwise 4 of the top 7 players and all the assistants leave after the best season in years, which there would be no spin for. That's a four alarm fire. Kofi staying is literally the only normal thing that happened this off-season.

It really isn't. It's the new normal. The assistants all leaving the same off-season is a bit unlucky, but between NIL, the new transfer rule, and having players as good as ayo who can go pro, losing 4 or of your top 7 is standard operating procedure in 2021.

One or the other, sure. Both? Show me the other ranked teams that happened to.

Losing Gentry back to Gonzaga is going to happen. Losing OA to Kentucky is going to happen. Giorgi going Pro, Ayo going NBA. If Kofi went Pro, can’t avoid. Miller leaving....if you knew what happened all year...couldn’t be avoided and will be better for team. Chin Coleman ok.

I acknowledged that the coaching turnover is rare, but if you understand the background its pretty obvious why at least 2 of the 3 coaches went back home. The player turnover is common in this day in age.

So even if we had lost Kofi and Ayo, along with Adam and Giorgi, that just puts as at par for the course with the rest of the top 10 teams from last year.

I've been waiting for this article. I needed that. Someone else gets it.

Now when you go to recruit for 2023, you'll have an Illini program that has been good the entire time he's been in high school. They won't even remember the Groce era or Underwood's first two years.

And a shout out to Lou, who laid the bricks and established that original foundation many of us now use as a comparative baseline. Playing in the NCAA tourney each and every year should be a given. Reaching the Sweet 16 each year and consistently playing the second weekend should be the goal. Do this -- and that 1st national championship will finally come under Brad's leadership.

We're a basketball school until we're not!

And a Jimmy Collins shout out as the recruiter for many of those players!

Love the Top 100 recruit data on pre and post BU. Lots of Fun Game Days Ahead!

"To steal a term from 30 Rock, he's Reaganing right now."

lol. Well done. Yeah, Underwood is the bomb. I'm Class of '88, have been an Illini fan since '83, and have followed Big Ten hoops fanatically since '72 when I was in kindergarten.

Not once this off season have I doubted that the program is in the right hands with a guy who may well retire here. Haven't felt this stable and long-term positive since the late '80s under Lou.

I am class of '91, and right there with you Altgeld88. My siblings and I are 3rd of 4 generations of Illini, and I can't remember a time (outside Lou's tenure) when things felt so solid. It's nice to feel good about Illinois hoops again.

1991 here too. Other than a slight uptick upon Zooks hiring and early recruiting, could not agree more.