I know I do that thing where I get fixated on something and you all want to tell me "we get it, Robert" and then I just keep saying it, but I just can't get over the Minnesota student section chanting "over-rated" (clap clap clapclapclap) in the first half when Kofi was at the free throw line.

I know that sometimes it's just one student who starts the chant, and everyone else immediately joins in, and then people realize what they're saying and they're all "wait, do we really want to be saying this?". But this one was definitely a repeated chant. Came in the first half when Kofi was at the line. Here's what I tweeted:

Minnesota student section decided to go with the “over-rated” chant for Kofi.

It was one of the bigger "REALLY?" moments I can recall inside a Big Ten arena. Part of me was "you guys realize he's going to get a double-double and you'll be known as the student section who chanted 'over-rated' during a game where he dominated you, right?", and the other part is "you really want to poke the bear here?".

Earlier today I was looking for something I wrote last year. While scanning through several articles from January and February I saw a common theme to what I was writing: we just don't know how lucky we are to have Ayo. So how crazy is it to have that feeling two years in a row? Kofi was absolutely dominant tonight. Minnesota didn't have a single answer for him. And the game was over quickly.

After I left The Barn I was standing outside waiting for my Uber when a Minnesota player walked right past me talking to someone. Your intrepid reporter on the scene will now report what he was saying as he walked past me: "They shoot the ball so well we couldn't really double or triple team him every time". Son, you just hit the nail in the correct location. That's the puzzle teams will need to solve.

Tonight, it was "don't let them hit a ton of threes". And I got texts from no less than four different people during/after the game all saying nearly the same thing: so great to win in a blowout during a game where we only hit six three pointers. If we can maintain this, we'll be the Pick Your Poison Illini (doesn't exactly roll off the tongue like Flyin' Illini). As Tyler just said in a text to me, Minnesota chose Death By Kofi.

And in a Death By Kofi game, the Minnesota student section actually chanted "over-rated".

+ I needed to fan tonight so I was sitting in the upper deck with my friend Dave (you can see our view from that pic up there at the top). And as the game progressed, I kept saying the same thing to Dave over and over and over: "we'll let them take that shot all day". Minnesota played 1992 basketball tonight. I just couldn't get over how many 17' jumpers they took.

So I was anxiously awaiting the shot chart from the game. And when flipping through the stats looking for it, I found this chart which probably tells the story even better. 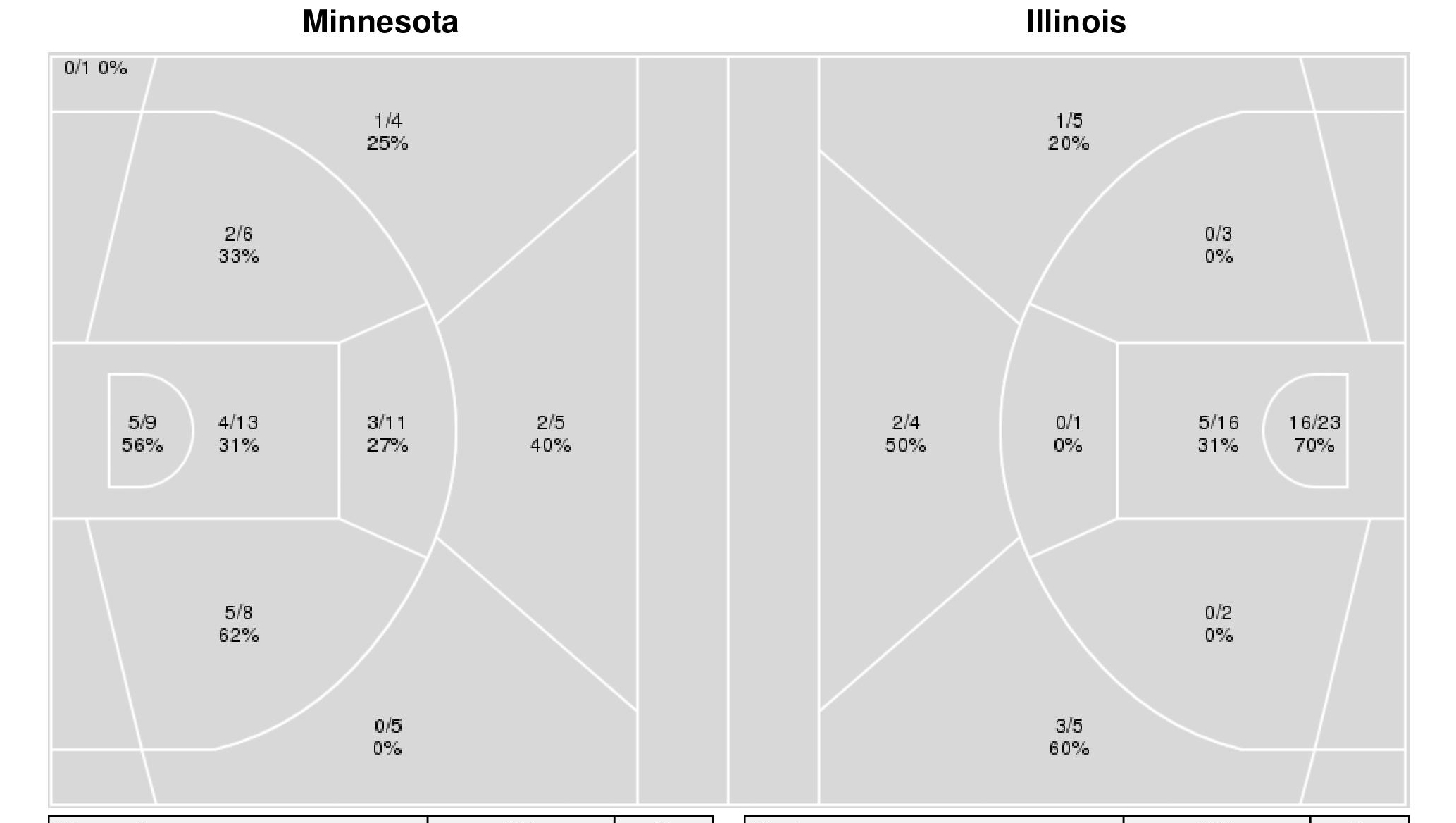 To generalize here, basketball has moved to a game of threes and layups. The ideal shot chart (in theory) would be a bunch of shots from three and a bunch of shots at the rim. If you're gonna shoot an 18-footer, it's much better to shoot a three from two feet further out because you get more points. There's a lot more to the debate but... you understand what I'm saying.

So let's just add up the shots in those "two point jumper" areas. Right wing, left wing, and inside the key.

I know there's a lot more to that debate, and that a wide open jumper from 16 is better than a contested three from 22. But this entire game I kept saying the same thing over and over: "Their four-man wants to shoot a jumper from 17 feet? Go ahead. You can do this every time down. we won't even guard you. One free jumper from 17 feet every single time down the court."

One more thing from that chart:

Minnesota had no chance.

+ Da'Monte Williams and Jacob Grandison are the "do all the little things" players of our dreams. Can a team have two Glue Guys? Because we have two Glue Guys. Here's the stat lines from the Glue Twins tonight:

Together they hit 5 of 6 threes and sweartogod captured every single loose ball on the floor. I mean, is this the gluiest glue guy play of all time?

+ So now we're 3-0 in the Big Ten with two road wins. We're up to #11 on KenPom as of this moment (just before midnight). Next up we have KenPom #58 at home (Maryland) and KenPom #141 on the road (Nebraska) before Michigan-Purdue weekend. And Michigan is now 7-6 (1-2 in the B1G) after losing at Rutgers. Also, Michigan lost to this Minnesota team by 10. In Ann Arbor.

Which means there's a decent chance we're 6-0 in the Big Ten when Purdue comes to town on MLKJr Day. Big game, that. After that, spaced around road games at Maryland and Northwestern, we get both Michigan State and Wisconsin coming to Champaign. Do you smell that? Opportunity.

Going off your picture at the top - I'm almost surprised you could hear them chanting "over rated" with so few people in the stands.

There's something better to do in Minneapolis on a Tuesday night?

To be fair, they all found out on Thursday that their ticket for Sunday was now a ticket for a game on Tuesday at 6:00 pm. I’m sure that eliminated 25% of the fans on the spot.

Good to also factor in winter break and Omicron.

How about the improvement Kofi has made at the FT line. Up 13 points from last season from 55 to 68%. It's really remarkable.

Thanks for the correction!
Assuming he keeps this up, I have to think Kofi lands on an NBA roster next season.

I mean, is this the gluiest glue guy play of all time?

I love this (and this post) so, so much.

I think the clip shows the Gluiest glue guys play.

I think the clip shows the Gluiest glue guys play.

Totally agree...the effort from DMW and Grandison is amazing!

I thought that was the best DMW game of the season. 9 points and three 3-pointers. He looked like last season's DMW to me...awesome.

And Grandison! His 3-point shooting style looks like Ayo's to me. He's such a great player and makes BIG plays! So much fun to watch!

Not so fast with the 6-0, my friend---I am wary of the matchup tonight against a very talented and long Maryland team that is gaining its mojo back following the sudden "retirement" of its head coach! I watched how hard and loosely they played as a Danny Manning-led team at Iowa, and am worried about the Terrapins match-up inside with two (2) springy five's to harass Kofi and their quick point guard (Fatt Russell)----we are susceptible to pressure without a true point guard, and the Terps have the team that can press in both the full and half-court.....thinking that we cannot hide the lack of a point guard forever, and that no Curbelo will come-back to "bite us" some point--hoping I am wrong, Robert!

And YES, I was wrong---failed to acknowledge the difference Kofi could make: ALL Hail "King Kofi"