There are some posts I've written that stick with me for a long time. Not in a "wow, that was really good" way, but because I was able to articulate (for myself) something I'd long been unable to put into words. One of those articles was the very first year I started blogging (2009). On November 20, 2009, I wrote about Nose Prints.

The theme of that post: my youngest son was home sick from school and I was taking care of him. He was suddenly better by 3:00 (amazing coincidence) and wanted to go to the park to play football with his friends (it was raining all day, so they had this one field in the park where they would play mud football after it rained). I told him "no school, no football", and I wouldn't budge. To make matters worse, his friends walked past our house on their way to the park. He left a nose print (and hand prints) on the window as he watched them walk by, unable to join them.

I related that to my feeling as an Illini football fan. That was November 2009, during that awful 2009 season where we thought we could maybe win the Big Ten and then somehow went 3-9. Vegas set our over/under for wins at 7.5 or 8. We had gone 5-7 in 2008 and Missouri had gone 10-4 yet we were favored by a touchdown in the opener in St. Louis. All this preseason hype, 7-to-9.com, a 10-2 prediction from College Football News (which I clung to because it matched my own 10-2 prediction) and then... 3-9.

After that season fell apart, I felt myself relating to my son leaving nose prints on the glass. That Missouri team we were supposed to beat won 8 games (something we still haven't done since 2007). Iowa went 11-2. Northwestern won 8 games. And there I was, nose pressed up against the glass, watching Missouri and Iowa and Northwestern head off to the park to play football while I had to stay home. Excruciating.

It's why I chose a photo of Kaden Feagin on a Notre Dame visit for the cover photo of this article. It's why you'll see some snippets from some articles below about other schools pursuing him. This is the kind of thing the feels like big-time football - where you get to go down to the park to play football with the others instead of having to stay home. Illini Basketball gets to go to the park to play with their friends - why does Illini football always have to stay home?

It's why I immediately went and read a bunch of stuff like this when he committed. From Irish Breakdown in late January (and yes, I did a double-take at the letters "IB" with a clover leaf behind them):

From a recruiting perspective, Feagin is a fascinating case study. The majority of his interest has come on the defensive side of the football, due to his larger frame and athletic profile.

In fact, every major recruiting service does have Feagin listed as a linebacker recruit, outside of ESPN who ranks him as an athlete. Feagin ranks as a four star recruit by both On3 and Rivals, with On3 ranking him as the nation's No. 81 overall player, No. 6 linebacker and No. 2 player in the state of Illinois.

The Irish currently prefer Feagin on the offensive side of the football, where his size profile would potentially be a nice compliment to what Irvin would bring to the offense. Doubling as a dynamic two-way performer for Arthur, as well as returning both kicks and punts, Feagin is also a notable basketball and track and field athlete for the school.

On the basketball court, Feagin has been a three-year contributor for the school. Over his career, he has averaged 10.4 points per game and 6.9 rebounds per game, as well as 2.7 steals per game and 1.7 blocks per game this season. Perhaps his most eye popping athletic feats, however, carry over to the spring track season.

For a player his size, Feagin boasts a career best mark of 21'8 3?4" in the long jump, demonstrating impressive explosiveness for a kid 220+ pounds. That mark is unheard of for this type of profile.

The interest is clearly reciprocated for Feagin, who has spent a lot of time in South Bend already, and he'll be back on campus this weekend.

"I have been on campus five times and I will also be on campus this weekend for Junior Day," Feagin responded.

Maybe it's just me, but instead of a bed I want to sleep on a collection of articles just like this. I'll use "visited Notre Dame six times but picked Illinois" for my pillow.

I have a subscription to The Athletic and kinda freaked out when scrolling their site in March and seeing this photo of Feagin in Hawkeye gear: 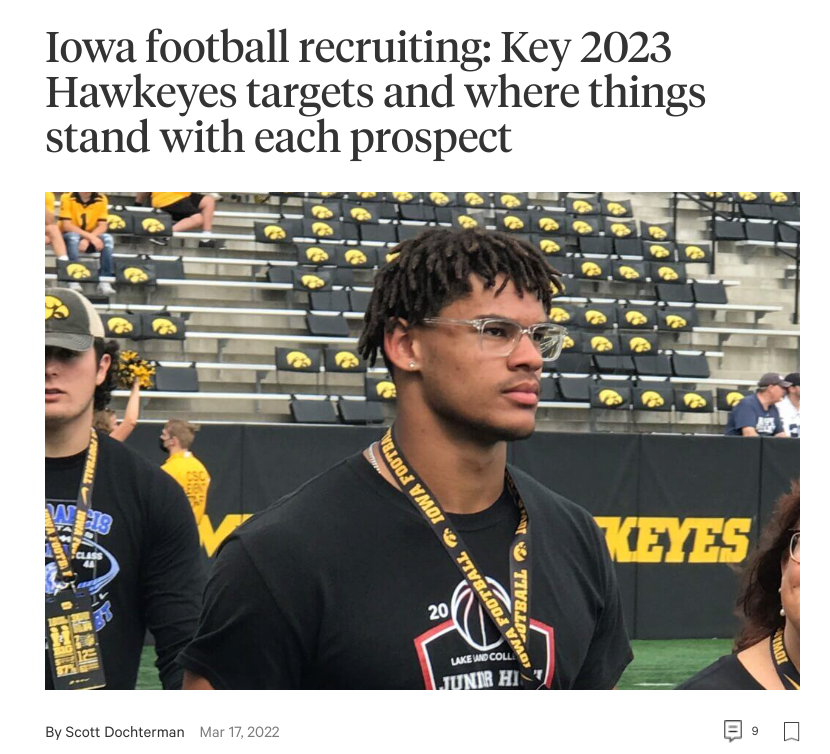 I clicked on the article and scrolled to the Feagin portion as quickly as I could:

Notable: Feagin (6-2, 230) has the size, strength and speed reminiscent of current Wisconsin running back Braelon Allen. As a power running back, Feagin rushed for 1,246 yards and 15 touchdowns but had enough speed to score on a 97-yard kickoff return in a state playoff game. On defense, Feagin compiled 84 tackles and two interceptions entering the Knights' playoff game. Nearly every Big Ten team has offered Feagin, including Illinois, Wisconsin, Minnesota, Indiana, Michigan and Purdue. Notre Dame, Miami and Tennessee also have extended scholarship offers. The Illini, in particular, have targeted Feagin, who lives in a small town about 40 miles southwest of Champaign.

And then, of course, I had to scroll through all of his offers on Twitter. Slowly. I paused for a long time right here: 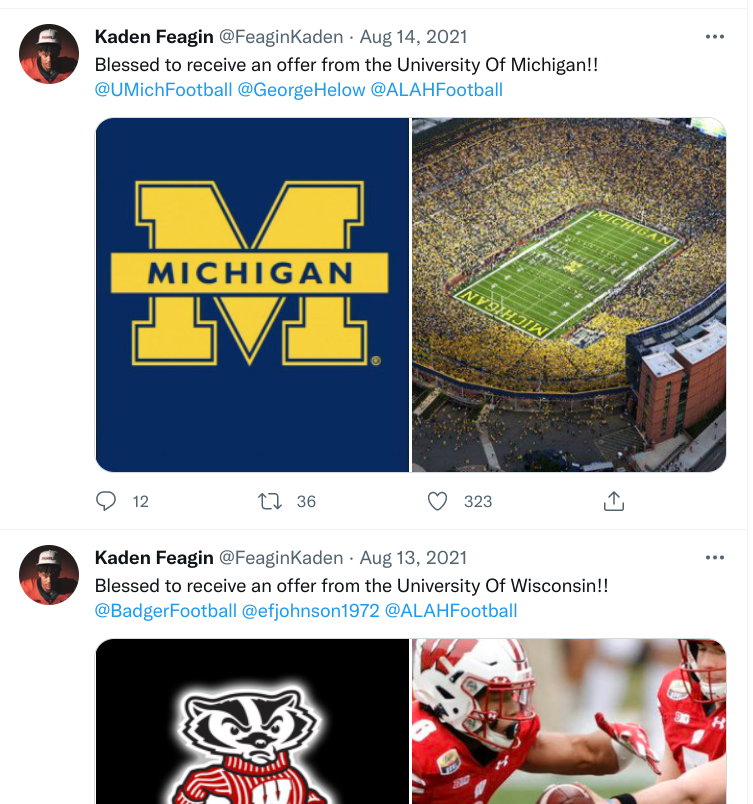 Why do this? Because we don't get to swim in that end of the pool very often. Wisconsin and Michigan and Iowa and Notre Dame fans land recruits like this all the time, once again guaranteeing that they'll be good for another dozen years. We haven't won more than 7 games since George W. Bush was President. We just never, ever get to play. And landing a player like this moves us closer to getting the green light to head down to the park.

We covered his offers there (just didn't mention Miami and Tennessee, I don't think), so let's go to the film. And there, well, you know what I'm about to say. 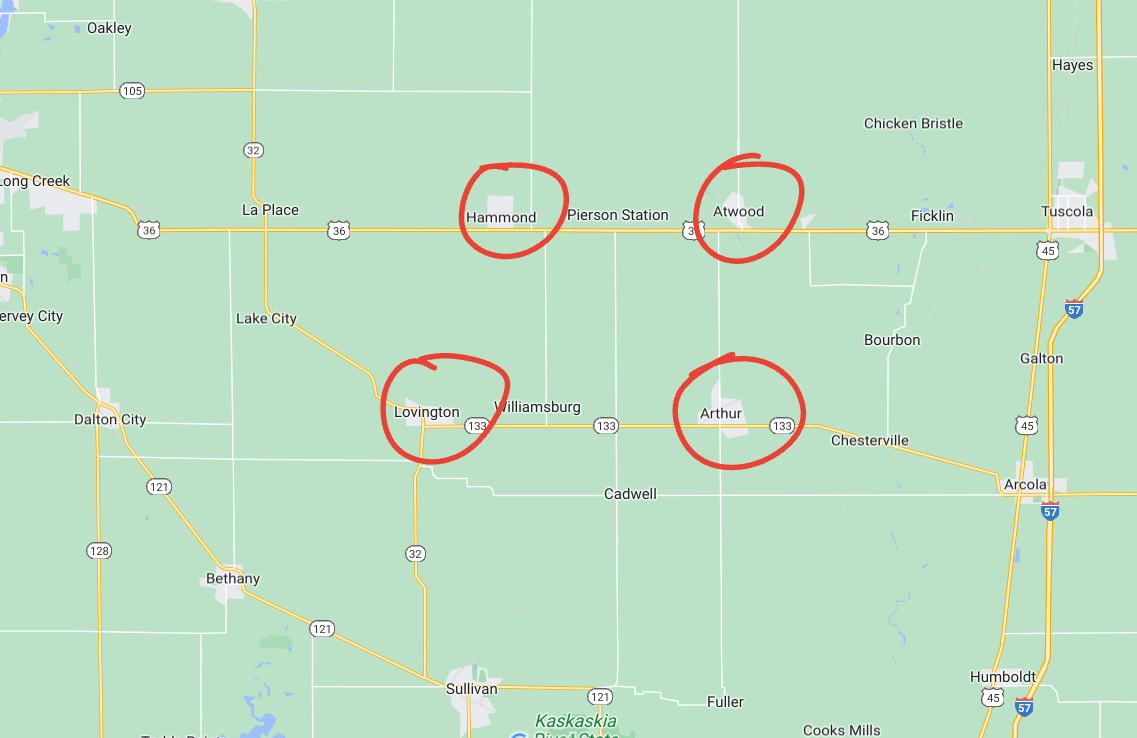 My point here: it's a small high school. They play 2A football. So when you watch these gifs below, well, he's a 235 lb four-star Decepticon playing against a bunch of kids. So just keep that in mind. He won't be able to run over Wisconsin linebackers like this:

And he's not going to run away from the Iowa secondary like this:

But yes, there are some plays in his film - especially when he's lined up in the backfield with another 2A running back - which make you wonder if you're watching Forest Whitaker playing for Ridgemont High:

For years, Michigan has landed that player. And Notre Dame has landed that player. Iowa and Wisconsin have grabbed their share of Feagins as well. The kid who can't be anything but a four star because he's bigger, faster, and stronger than nearly everyone in his entire state. Some see this and think linebacker, Bret Bielema sees this and thinks running back, but in a way it doesn't matter. The kids who are bigger, stronger, and faster than everyone else - who are incredibly fast and agile for someone their size - are the kids who can help you win the Big Ten West whatever position they play.

So this is one of those LLUOI posts that is incredibly simple. I don't need to overthink it one ounce. A kid with Michigan, Notre Dame, Iowa, and Wisconsin offers who decides to stay home and bring his bigger/stronger/faster to Champaign. That earns you 4.5 Cruises, no questions asked.

Bless you, Sir, for calling my hometown (Arthur) a city.

This whole recruitment really took me down memory lane!

Would love to read your review of dinner in Chicken Bristle.

I grew up within 10 miles of Chicken Bristle, have lived in the area all my life, and have never, ever heard anyone utter the words "Chicken Bristle". It's just a leftover place name from an earlier time that still has a few houses.

Also never heard of La Place, IL. I believe that is French for, The Place.

I've at least driven through every name shown on that map except for Oakley, Fuller and (Of course) Chicken Bristle. Don't know if that means anything, other than perhaps I've spent a lot of time in Central Illinois.

I will say that little stretch from Lovington to Tuscola has produced a good share of Division I basketball and football athletes in fairly recent history. Chas McFarland (Wake Forest basketball) was from Lovington... Fred Wakefield (Illinois football), Hunter Woodard (Oklahoma State football) and Jalen Quinn (Soon to be with Loyola basketball) were/are from Tuscola... And now Feagin from Arthur.

There's an intersection in the country outside of Rochester that is the intersection of Chicken Bristle Rd and Possum Trot Rd. They just don't name 'em like that anymore. If there isn't a restaurant in Chicken Bristle, head on down to Arthur and check out either Yoder's Kitchen (Amish buffet) or Pauly's BBQ. Both worth the drive.

When the competition is 2A, it's hard to know for certain how good a player really is, but Feagin looks like a combination of speed and strength that will translate well to the college game. Hopefully he draws more talent just like him.

Not exactly on topic for this particular recruit, but I am interested in your thoughts on how NIL might affect recruiting going forward. In addition to the usual carrots of instant playing time, a chance to win the National Championship, awesome practice facilities, etc., now there is a consideration as to where can I maximize my NIL income (fan base size and rabidity, TV market size, etc.). Where are we headed?

If he's the next Charles Jefferson, Bielema needs to "recruit" a Jeff Spicoli to wreck his car every Friday.