I feel like I've written about SP+ more than two dozen times, and each time I try to start with a few paragraphs explaining what it is. Maybe I don't need to do that anymore? Maybe I do.

Connelly always mentions the five factors that go into SP+: efficiency, explosiveness, field position, finishing drives, and turnovers. It's hard to project turnovers season to season (they come and go based on what the oblong ball wants to do once it's fumbled or tipped), so the first four factors carry the day. Each team gets a rating which is projected before the season and then adjusted once the game results come in. By the end of the year, the rating tells you where you stand against the average college football team.

Here's a season-by-season for Illinois in the SP+. As you can see, that spike in 2021 is very, very encouraging: 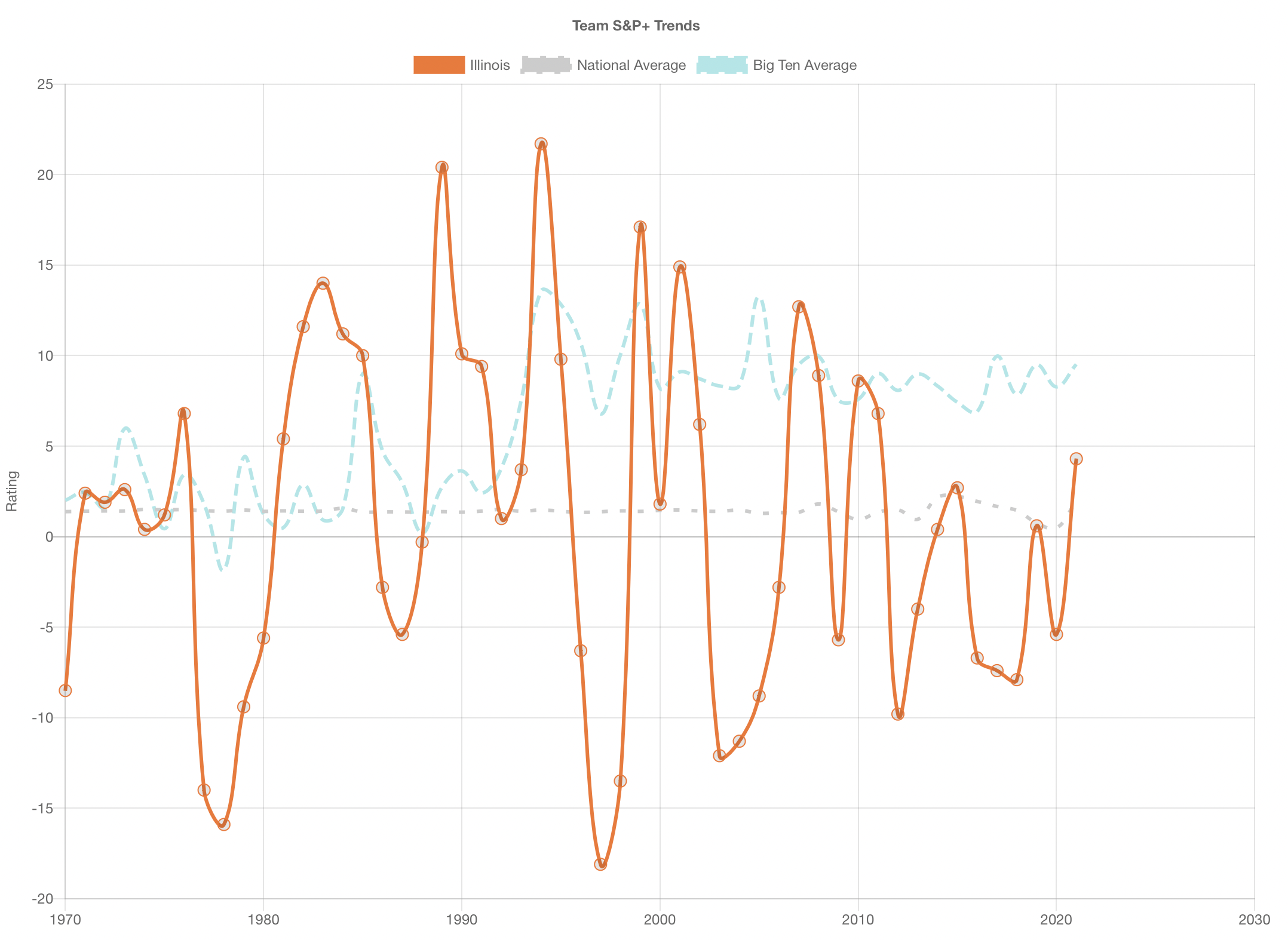 Yes, per SP+, the best Illini team of the last 50 years was 1994. 21.7 points better than the average college football team. The two Rose Bowl teams - 1983 and 2007 - were actually, per this stat, the fifth and sixth-best (in the last 50 years). Sometimes you win every close game right at the end (2001) and sometimes you don't (1994). Replay those seasons fifty times and 1994 will have the better season way more than 2001. But Ken Dilger was stopped at the one against Purdue and Bret Scheuplein missed the 54-yard FG against Wazzu and Brian Milne scored for #2 Penn State with 30 seconds left and 1994 finished 7-5. 2001? Brandon Lloyd made the catch against Wisconsin and Rocky Harvey scored when he hopped over the Penn State linebacker with a minute left (and we somehow held on to beat NIU 17-12) and 2001 finished 10-2.

Yes, that sometimes comes down to one coaching decision. You've probably seen that Nebraska stat this offseason: "Nebraska was eleven plays from 12-0; instead, they went 3-9". The most common response: "Scott Frost's coaching staff chokes when the game is on the line." Perhaps. It's an ugly trend so far. But the stats say that Nebraska has the efficiency and the explosiveness to be 9.3 points better than the average college football team. That's the exact same as Purdue (9.3). Purdue went 9-4. Nebraska went 3-9.

That's for the season-ending SP+, though. Connelly also does projections for the next season. He takes your recent SP+ history (our 4.3 really helps here), applies your average recruiting classes the last few years (ouch), and your returning production (double ouch) and gives a preseason number. He updated his preseason numbers this morning. Illinois? -3.2, good for 82nd nationally.

First, I want to say that yes, 4-5 in the Big Ten in 2021 is a very important data point. When recent Illinois coaches won their fourth conference game:

This is a very significant thing. As this stat works its way into the SP+ (in the "how good have you been of late?" portion of the preseason projections), it will really start to do some damage. But for now, it's one year of data fighting against a lot of bad history.

And it's also fighting recruiting rankings and returning production. Let's go through both.

For recruiting rankings, I believe Connelly uses the 247 Composite. And he weights the numbers. The most recent class counts for a fair bit and three-classes-back counts less (mostly because those players are already showing up in the actual stats by then). He's just trying to get an idea of any instant impact players coming in. I believe he uses average player rating for this and not class ranking, although I can't find where he said that. Here's our average player ranking the last few years:

All are between 50th-best and 70th-best average player rating, so this number really won't help our preseason projection at all. Yes, Illinois had the "46th-best class" according to the 247 Composite, but that's because there were 26 players total. Wisconsin was one spot ahead in 45th but their average player rating was 87.33 (16 players). Compare that to Arizona - they brought a class that ranked #22, but their average player rating was 86.94. I can already feel myself wanting to rant about how Arizona's class is #22 and Wisconsin's class is #45 just based on number of players brought in when Wisconsin has more talent coming in, but I won't. My point with these recruiting rankings: they won't help us in the SP+ projections.

So then it's returning production. This isn't just "contributors returning", it's contributors returning at the positions where it matters most like experienced offensive linemen and defensive backs who have a lot of passes defended (interceptions and PBU's). This is another stat I've described two dozen times so I won't go down that road.

The red and green here reflect the teams who have moved significantly since the last time he put together these numbers in February. And since he tracks the portal now, the red numbers reflect that all of Wyoming's important players left via the portal (that's good for us on August 27th) and Miami added a ton of experienced players from the portal. He's been tinkering with the portal stuff - should a player's production at Utah State equal "returning" production when he transfers to Utah? - and I'm guessing this stat will keep evolving based on that. But for now, in 2022, Illinois is 115th.

And that makes sense, right? 17 seniors plus 19 players left via the portal. That's a fair bit going out the door. Perhaps more importantly, a lot of the most statistically-important players went off to the NFL. Three were three draft picks, plus seven other players signed as undrafted free agents. I know that's tied with the 2016 draft for the most Illini draft picks since 2013. And I can't remember any year in the last decade that saw seven free agent signings immediately after the draft. So big picture here... that's a lot going out the door. We knew that -- in this space we've been talking about it for at least four years -- but now this ranking of 115th is statistical representation of the dreaded roster cliff.

And the result of {waves hands around} all of this? Big Ten preseason rankings that look like this going into 2022:

The hope? That this staff pushes this next roster well beyond expectations. A quick review of the last few years:

Bret Bielema inherited a team ranked 89th (but with a lot of seniors) and coached them up 25 spots. Now he inherits a team projected to finish in the 80's again, this time because all the seniors graduated, two players left early for the NFL, offensive contributors like Barker, Navarro, and Spann transferred out, and 16 other players left, replaced by mostly true freshmen. What can he do with this roster? Can he have those freshmen ready soon? Can he take the other players he inherited (who mostly didn't play last season) and coach them up 25 spots again?

We shall see. This task is a lot more difficult. This season feels like 2018 to me (transfer quarterback, tons of turnover on defense, offensive line rebuild). Can he produce something better than 2018?

After such an encouraging season last year, I'm so ready to find out.

Does any of this capture the massive upgrade at OC? Also, isn’t our schedule pretty favorable this year? I’m a basketball guy but it seems like we’re set up to win a few games this year despite the rebuild. I also think BB’s scheme really works well for winning 5+ games even without amazing talent. The strong finish and firing the OC really won me over to BB. The guy seems to have a vision for how to succeed at Illinois that actually relates to reality. Haven’t really seen that in the last 20 years. It shows in the player development. Round pegs in round holes and a positive culture. All that stuff matters a lot.

The formula is mostly blind to coordinators, I think (except for the coordinators who have been somewhere a while and are part of the "good teams continue to be good/bad teams continue to be bad" thing). And I agree with that. That's not really something that carries through year to year. At least not as much as talent and experience. When Mike Locksley left Alabama to take the Maryland job he had the #2 offense in the country. Average offensive ranking (SP+) in his three years at Maryland: 55.

Coordinators are mostly a function of talent and experience (in my view, at least). Yes, a coordinator can move you up or down the rankings - I think last year's defense would have only risen to somewhere around 55th under Lovie and we moved to #32 under Walters - but I don't really believe in such a thing as "massive upgrade at coordinator". I'm more of a "moderate upgrade" guy. Tony Petersen, with Alabama's 2018 offensive roster, would have had, like, the 6th-best offense in the country.

The example I always use when I make this point: everyone thought Joe Brady was the greatest coordinator on earth at LSU in 2019. No, he had Joe Burrow throwing to Jamar Chase and Justin Jefferson and handing it off to Clyde Edwards-Helaire. He went to the Carolina Panthers, had two bad offenses, and was fired in less than two years.

So in other words, we're looking at yet another typical Illinois football season . . . (sigh)

The historical chart reinforces the fact that the Moeller years were so bad.