I'm just going to keep this running list running until I reach the end. I'll keep adding names at the bottom, and at certain times (like right now) it's going to feel like I'm never going to catch up, but I'm going to just keep going. In fact, right now, I'm out of town, sequestered in a hotel, cranking on my IlliniBoard to-do list.

One of the 13 things on that list: "Get caught up on LLUOI articles". And here's the sub-list there:

I'm not wanting you to feel sorry for me. All of this is my own doing. I could solve a lot of my problems by simply making the decision to reduce LLUOI articles from "6-8 hours of research and writing" to "60-90 minutes of researching and writing." And Lord knows I could stop writing out Illini lyrics to 1950's Broadway tunes and just reduce The 90 Illini to "here's the next ten players" posts every ten days with only basic details. I'm forever trying to find the balance between writing articles and writing articles. Thus far, I've chosen writing.

Which means that I started this list with eight LLUOI's to write and now that I've written ten of them there are... nine LLUOI's to write. But just because the current is faster than you can swim doesn't mean you stop swimming. Eventually you'll get stronger, and then you'll swim faster, and THEN maybe you can catch up.

Let's start with that photo at the top. It was tweeted by OL coach Bart Miller when all of the new players arrived on campus last week. That's Dylan Davis all the way to the right. Here's the photo: 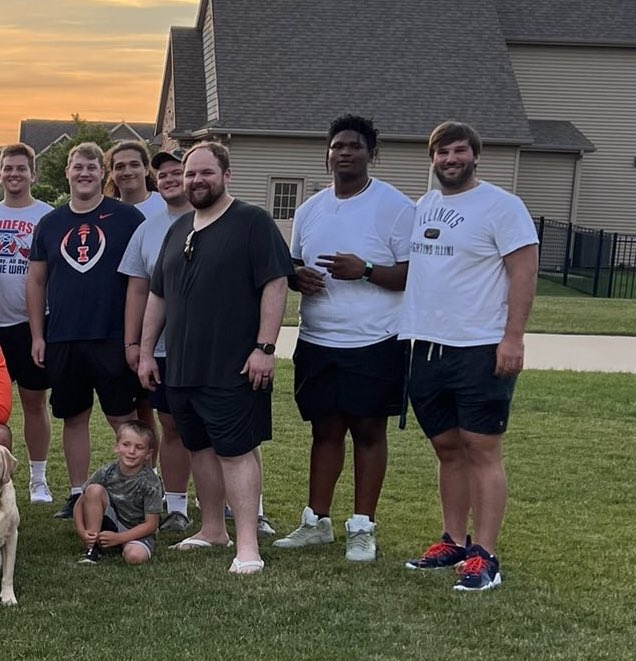 Wait, I'm doing the thing again where I assume you've read everything about Dylan Davis in the last six weeks since he verballed and I don't have to give you any of the basics. Here's the basics:

And if me saying "if St. Stephen's Episcopal School sounds familiar" sounds familiar, when I wrote about walkon Peyton Vining last year, I noted that he went to the same high school as Chase and Sydney Brown. I'm pretty sure this is how Inception begins.

When researching something about Chase or Syd last year, I remember going to the St. Stephen's Episcopal website and looking at their campus map. And while everything seemed pretty normal (for a private school in Bradenton, Florida), one thing stuck out to me. The Marine Science building. Here's that corner of the campus map: 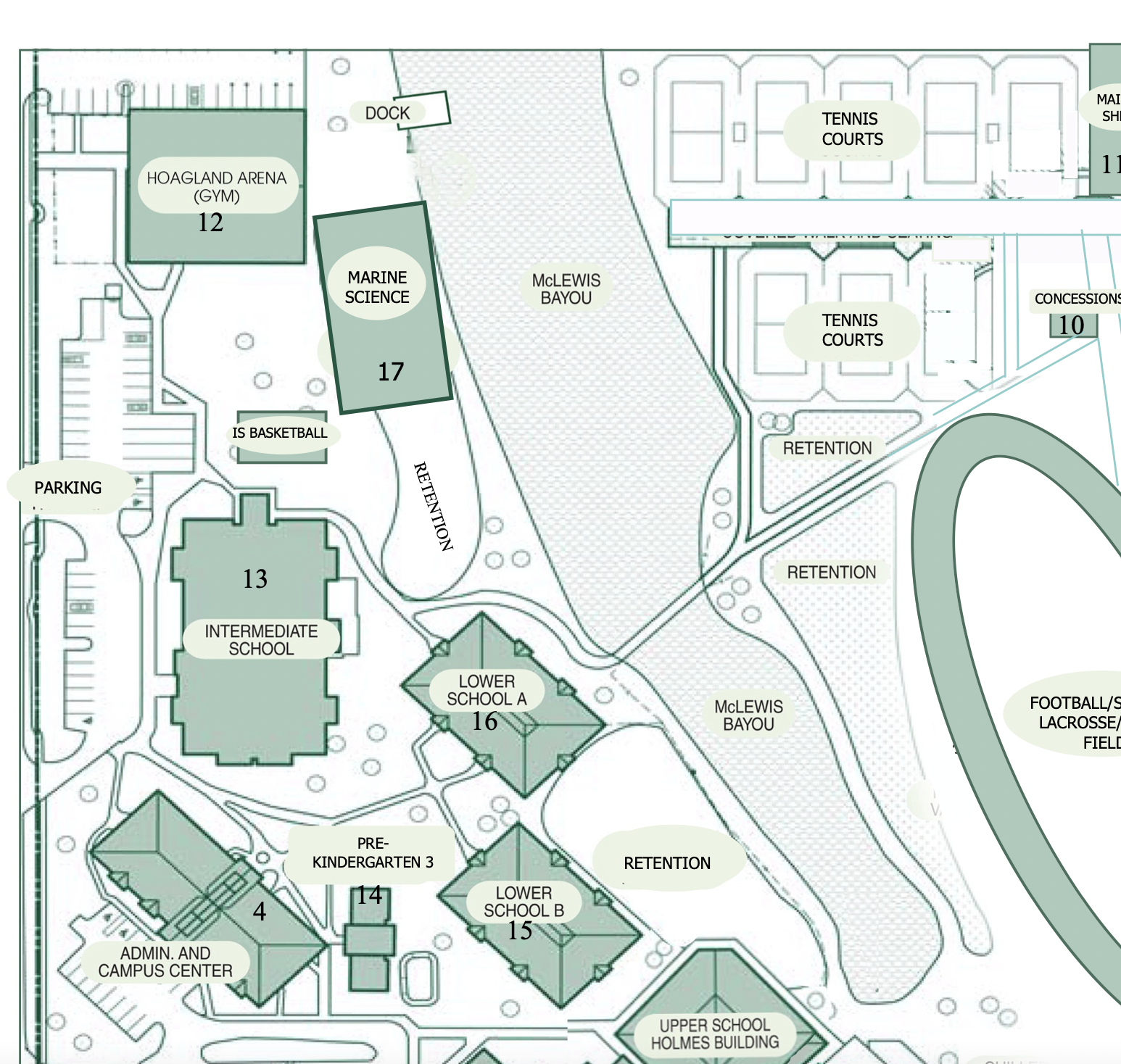 What high school has a marine science building? Well, a high school with a "bayou" right next to it which connects to the Manatee River which opens up out into Tampa Bay: 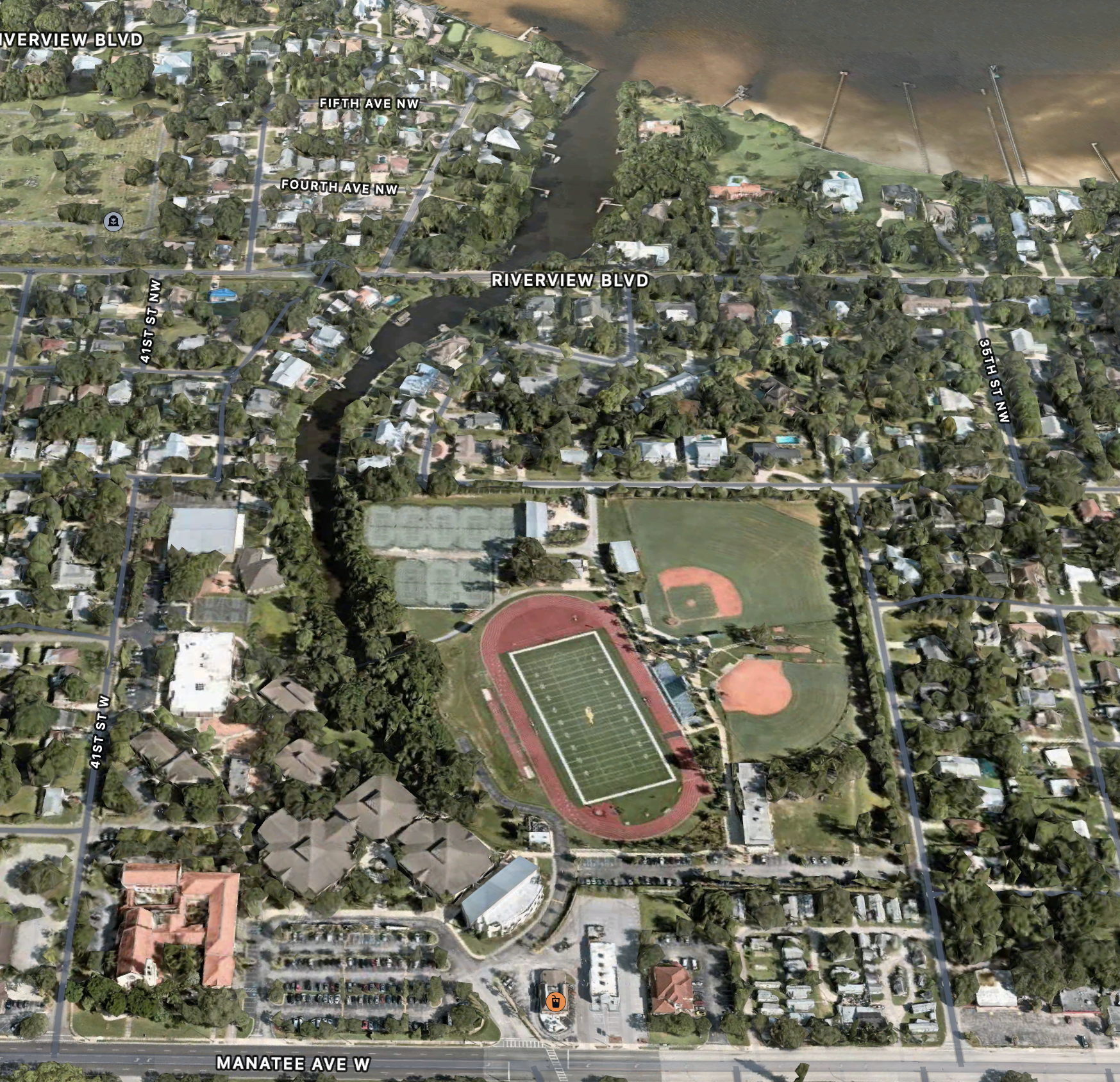 So I guess at this high school, they have a Marine Science building where, like, an actual manatee could swim up to the students. I will now ask Syd and Chase if they ever swam with manatees when moved from Canada to Florida to play high school football.

(I promised myself I wouldn't publish thoughts like that anymore yet here I am doing it again. The last time I wrote "I'll have to ask {player} about {thing}", another reporter literally asked {player} about {thing} at {player's} next media availability. If you're going to buy a burner subscription and look over my shoulder, guys, at least change a few things before you turn in your assignment.)

Back to Dylan Davis. He graduated from St. Stephen's in 2020 and enrolled at Furman (an FCS school). That fall was the Covid year, and the FCS season was pushed to the spring. Furman played only 7 games (Davis played in two of them) and none of it counted towards anyone's eligibility. He returned in 2021 as a 5-to-play-4 freshman, played in 11 games, made the So-Con All-Freshman Team, and is now transferring to Illinois where he will have four years to play three seasons.

That's important for the slotting of offensive linemen on the roster. Remember the big hubbub about the Bielema quote during the bye week in October? Talking about the offensive line, he said "I don't believe we have a player in the two-deep that they recruited here over the last three years that is really significantly doing anything for us in the playing department". He had stated before that quote that certain parts of the roster hadn't played out like the previous staff had hoped, "particularly the offensive line." But just that last part of the quote spread like wildfire (with people thinking he was referring to all 85 players when he said "we don't have a player in the two-deep doing anything for us in the playing department"), and the world was lit on fire.

As I broke down at the time, he was very specifically talking about the recent offensive line classes. And he was right. He was rotating seven linemen - one was a 6th-year 2016 recruit, five were from the 2017 class, and one was from the 2018 class. That's an extremely top-heavy line with Julian Pearl the only player in the two-deep from the 2018, 2019, 2020, and 2021 recruiting classes. Jordyn Slaughter returns from injury this season (he was in the 2018 class), so that's some help, but here's the linemen from the 2019 and 2020 classes:

So that leaves a very big void between Slaughter and Pearl (both with a redshirt year and a Covid year they can use) and the 2021 class who are now redshirt freshmen (Josh Kreutz, Zach Barlev, and Josh Gesky). This is why filling that void with Isaiah Adams (a junior) and Zy Crisler + Dylan Davis (both sophomores) is a big deal. Toss out all of the "did this player use his Covid year?" stuff and just list players by their class and you can see why adding these three transfers was big:

I'm not gonna lie, that's a fantastic way to frame all of this. Gold star for Robert. Those three names in bold fill the void that was discussed during the bye week in October. Gold star for Bret.

What kind of player are we getting? It's hard to say. His Furman bio says that he had offers from Illinois, Iowa State, and Army in high school but chose Furman (weird). He did make the conference All-Freshman Team, so that's a starting point. But it's hard to get a read on a transfer like this. Were any other P5 schools interested? Was this just the staff needing a sophomore lineman and Syd or Chase saying "we know a guy"?

I searched and searched and did find some film. Shoutout to "vmijohn" on YouTube for uploading the entire VMU-Furman game from November. There are only 141 views, and two of them are mine, but you keep doing you, vmijohn. If there's one thing I love about college football, it's the vmijohn's of the world uploading entire games to YouTube because WHO WOULDN'T WANT TO WATCH THIS? Salute, vmijohn.

Davis is #77 at left tackle here. And this is a nice block. Gets himself a pancake. Sort of. A crepe.

Here, though, he gets beat (badly) by the pass rusher. I know this is a bit unfair - when I capture gifs of high school film, those players aren't putting plays where they whiff on a DE on their film - but this is a data point I should include:

This play, though, gives me the opposite feeling of that last play. This play should cause one if not both of your eyebrows to raise:

Get out and run, big fella!

Great to see him get to the spot and make the first block. And then also great to see him running with the play. If he sent in film of just this one play, I probably offer just based on that.

And when you combine that with the weight he's been able to gain, I'm quite intrigued. I mean, let's just look at three photos here.

When he signed with Furman in early 2020: 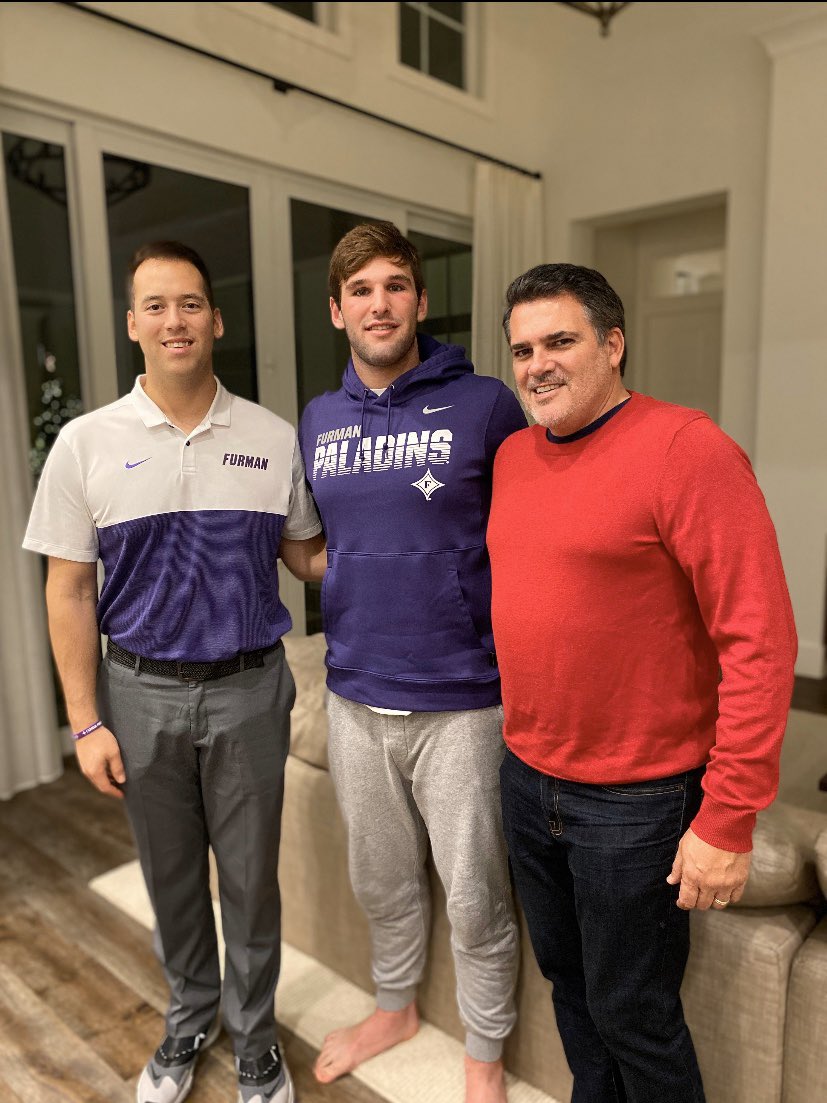 Working with a trainer in May of 2021 (so basically one year ago):

When I write these LLUOI articles I'm constantly saying "but can he add 65 lbs to his frame and play at 315 in college?" We already have a "yes" for Dylan Davis.

Which means I'm going a bit higher on Cruises than a sophomore Furman transfer might command. This is at least a three-Cruiser. Let me go see what I gave the last two transfers.

Raashaan Wilkins (DL from Vandy) got 2.75 and Terrell Jennings (CB from Minnesota State) got 1.25. Let's stay with the quarter-Cruise theme and go with...

That quote by BB drives me nuts. How many 1st and 2nd year players (freshmen and sophomores) did he recruit, that are ready to play right now. You give an OL two years and then, evaluate them. He ran them off to free up scholarships to bring in "his" players. His reason for doing is total b.s.!

I think everyone else looked at these guys and saw the same thing Bret did: They were not now nor would they be in the future FBS caliber OL, let alone P5 talent. A series of missed evals by the prior staff.

None of that's a guarantee that the guys Bret recruited will be. If you know you have a problem it's better to start searching for a solution sooner rather than later.

Add to that the Covid situation. The NCAA lifted the cap of 85 scholarship players in 2021 since everyone could stick around for a bonus year. They reduced that back down to 85 for 2022 but there are still three classes of players who have a bonus year to use. If this was a typical year, the staff would be taking players from four (and in the case of redshirts, five) recruiting classes and filling out the 85 scholarships. Now, they're taking players from five (and in the case of redshirts, six) recruiting classes.

When deciding to do that, the NCAA essentially said to every Division I program "all of you are going to have to cut 10-15 players this offseason". For this Illinois team, 19 players went out the door. Some, like Daniel Barker, went looking for catches somewhere else. Others are just done with football. And yes, some were told they probably weren't ever going to be higher than third string.

Great breakdown as always Robert. To me he profiles as a guard. I think he will play this year but I believe we have guard depth this year.

Excellent research and good reminder on the context of Bielema quote. As I recall, the team understood the context quite well.

Is it just me, or does Dylan look more flabby than ripped? Not that I am any

I promised myself I wouldn't publish thoughts like that anymore...[because]...another reporter literally asked {player} about {thing} at {player's} next media availability.

Or, now you know how to get two of your questions answered instead of one.