Let me tell you about my Illinois loyalty. Not my loyalty to Illinois - you hear about that every day - but my overall loyalty. Which, let's be honest, was probably developed at a young age as I was singing "we're loyal to you, Illinois."

I'm loyal to a fault. As anyone who knows me. From who I do business with to my brand of shampoo, I'm loyal. Actually, shampoo is probably a great way to talk about this.

In 1989 or so, when I was a sophomore in high school, some girl at choir practice pointed out some dandruff on my shoulder. I was a high school sophomore, and it was a girl, so I was horrified. I asked my mom about it and she told me to just use my dad's Head & Shoulders shampoo. It made the dandruff go away.

It is now 2022. If you go into my bathroom right now, you will find... Head & Shoulders shampoo. I honestly don't even know if I have dandruff issues. I wouldn't know because I've used Head & Shoulders every time I've showered for the last 33 years. I did eventually graduate to Head & Shoulders 2-in-1 (shampoo AND conditioner), so I guess I'm not using "my father's Head & Shoulders" anymore, but I found a thing and stuck to it.

This is how I am with high school basketball rankings. I found the RSCI 25 years ago. Other consensus rankings have come along in the time since, but they're just knockoffs of the original. And my loyalty, in its purest form, reveals itself in a scenario just like this.

247 took Jeff's idea (Jeff is the RSCI guy) and built their own consensus rankings 10 years ago. They changed it a little bit, weighting their own ratings higher than the others, and they used only three rankings (the RSCI has used as many as 9 or 10 over the years), but it's the same thing. Take all of the top-100 lists and build a consensus list. Or, as 247 called it, "composite."

I'll use those composite ratings for football because there's no basketball RSCI. But for basketball, for 25 years (12 where I didn't have a blog and posted my nonsense on message boards and the last 13 with the blog), I have stayed true to the RSCI. On Monday night, when Jeff tweeted out that the 2022 rankings were finalized and that tweet got one quote-tweet (my own) and three likes, I found myself angry all over again that the great ideas are always monetized by the larger companies. And it makes me ten times more loyal to the original.

Yes, part of that is likely personal. I treat my articles like paintings, and when another painter comes to my gallery and then goes home and tries to replicate my work, I get super frustrated. So I'm sure I'm just projecting that onto the RSCI when I see the 247 Composite and the On3 Consensus. But I believe in credit where credit is due, and RSCI is the original (and the best).

And as I mentioned above, the RSCI has been finalized for the 2022 class. Jeff used five top-100 lists this year: Van Coleman, ESPN, Rivals, 247 and On3. And all four Illini recruits made the top-100. Their rankings:

And when I add all of those names to my master list (every RSCI top-100 recruit since the RSCI began in 1998) and put the current roster in bold... 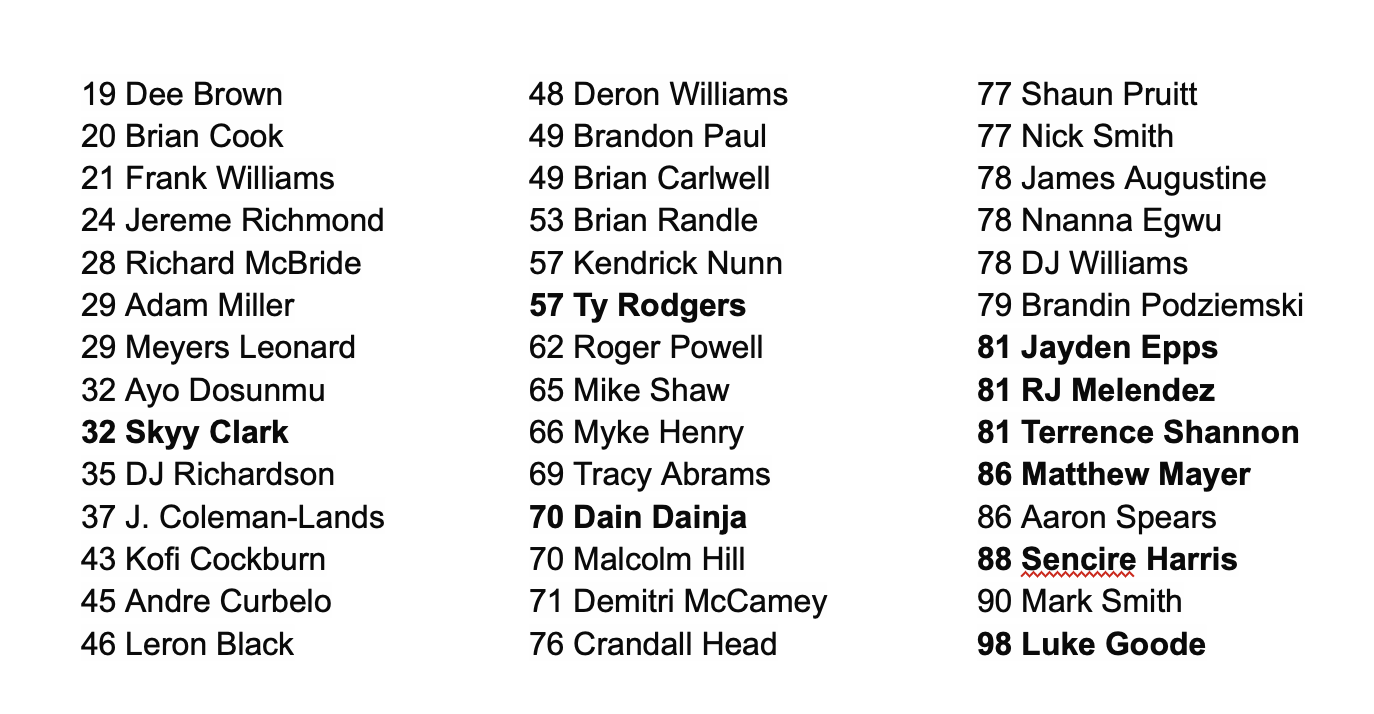 ...you'll find that nine of our eleven scholarship players were consensus top-100 recruits. The two who were not: Coleman Hawkins and Brandon Lieb.

Brandon Lieb was a project recruit offered the summer after his senior year of high school, but you're probably wondering how close Coleman Hawkins was to cracking the top-100. Well, that's one of the lines that the RSCI has drawn which I respect. I asked Jeff this when I interviewed him back in 2013 and he suggested the "tiers" I've referenced a lot over the years. The top 10 are your certain NBA players with the top 5 almost always being one and done. Top-25 means you almost certainly landed a college star. 25-50 are your impact players - maybe not right away, but as sophomores and juniors, these are the players who push teams into the Sweet Sixteen. Players ranked 50-100 can grow into impact players but it might take one or two years of development. And then beyond the top-100, it's a crapshoot.

Which is why, despite top-100 lists disappearing and the recruiting websites expanding to "here are the top-250 college basketball recruits" lists, the RSCI has remained at 100. It's a list of the players on those tiers and then everyone else is one big grouping beyond that.

And it continues a fairly insane trend. Maybe the best way to close here is to list every Underwood recruit and transfer since he got the job. And we'll do this in order. RSCI Top-100 recruits in bold:

Good stuff. Robert does the work and reader closes webpage feeling optimistic. College hoops not what it used to be, but Underwood doing superlative work with the new paradigm.

Powell is on there (#62 in his class). But the #1 unranked guy would be Luther Head. He did make a few lists after his senior season breakout. But not enough to crack the RSCI top-100.

Not sure how I forgot about Luther. Probably thought he was on list.

I liked the RSCI tweet after reading this. So we're up to 8 likes now.

I realize that the story is not about him but, why does no one seem to want to list Alex Legion as a top 50 consensus high school player when numbers/rankings like this are posted?

Wonder where Jones, Kuberski and Dunlap would have ranked.