I publish this article every July, but I'm not sure I'm going to get this one posted "in July" for those of you in the eastern time zone. I'll probably get there for CDT and I'll for sure get there for MDT but for EDT I'll be cutting it close.

If you're new here, my yearly INTERCEPTIONS rant is quite simple. In 2012, I put together a spreadsheet of every FBS team's interception total over the previous 10 years (interceptions grabbed, not interceptions thrown). I researched all interceptions from 2003 to 2012 and listed all of the teams from 1 to 120 (there were 120 FBS programs the first year I started researching the data). At the time, the Illini were dead last. The worst team in all of college football at picking off opponents. Name a team - Kansas, Akron, Louisiana-Monroe - we were worse.

I continued to write the article every summer. Some refer to it as "the Eastern Michigan article" because for the first four years, that was the battle: was Eastern Michigan the worst team at intercepting passes or was it Illinois? And who can forget that glorious day in September of 2015 when we finally passed EMU: 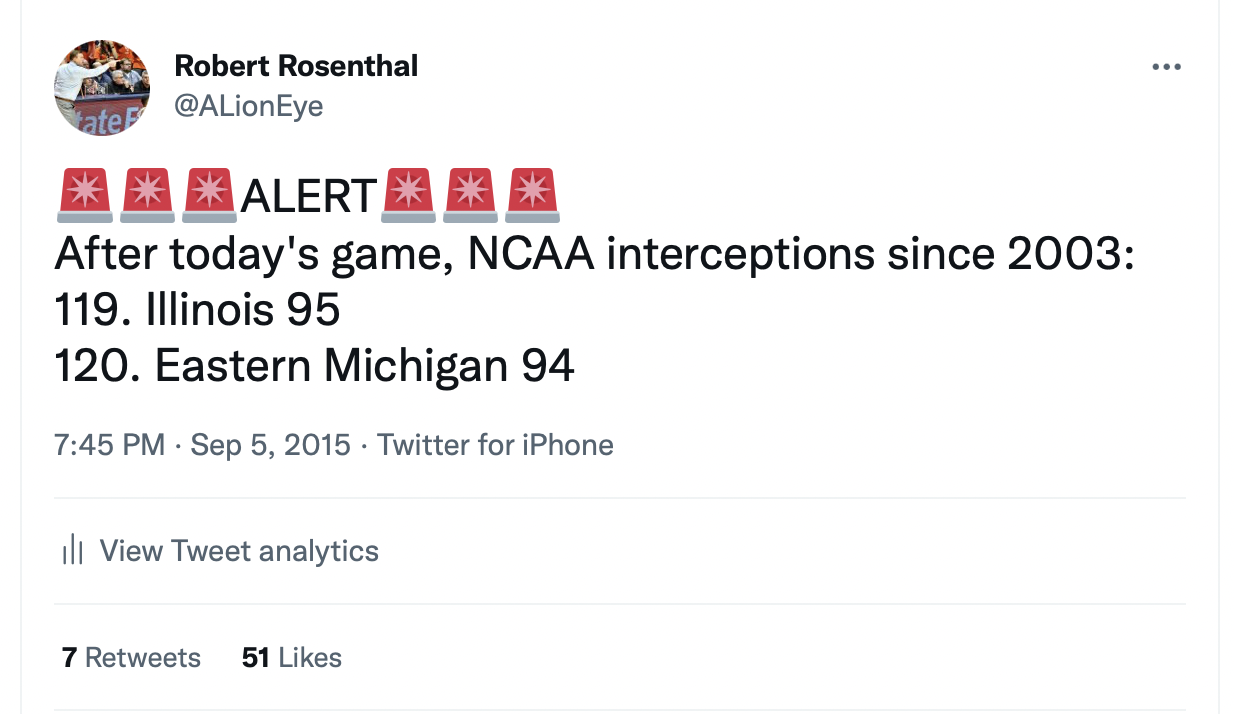 (Had to screencap that tweet because embedding it made the site go haywire.)

It was after the next season that someone suggested I keep it as a 10-year running total, not just add a new set of numbers each year. Each year I'd total up the interceptions over the previous ten seasons and publish the list. And after a few years of that, we not only climbed out of last, we pushed all the way up to, like, seventh-from-last. Seventh-from-last!

Last year was a high water mark: from 2011 through 2020, we had more interceptions than ten other football teams. TEN!

I'm laying on the sarcasm because I've been doing this for more than 10 years and we've never not been one of the worst in the country. I've written so many articles over the last 10 years about how turnovers. are. football. I've shared so many stats on how many additional yards are required when you lose the field position battle because you turn it over in your own end twice. And yet we can't ever seem to figure out interceptions.

Yes, some are luck. The ball bounces off the receiver's hands at a 72 degree angle and falls right to your free safety. That's not "he's just always around the ball", that's "it could have just as easily deflected the other way." Sometimes it's complete luck.

But sometimes it's skill. All five of Kerby Joseph's interceptions last year were skill. I can list all five off the top of my head:

Those are not luck. Those are what we've been lacking the last 20+ years (my spreadsheet has 21 years of data). Those are the reason we've never been above the 10th percentile the entire time I've been doing this.

Now, things did improve under Lovie. I covered this last year. Here's what I wrote about this subject last July:

So I think the final verdict there was yes, it was improved. 50 in 57 is better than 40 in 62. But it's still nowhere near the game-changing, short-field-inducing interceptions grabbed by our Big Ten West neighbors Iowa (138), Northwestern (137), and Wisconsin (127). That might not seem like much (127 for Wisconsin, 90 for Illinois), but as I say every year when writing this post, just think about those 37 drives which not only didn't end in points for the opponent but also set up excellent field position (or provided points with a pick six). 3.7 more interceptions every year is at least one win. Probably two. Just on interceptions alone without changing any yardage statistics.

Let's get to the data for this year. Last year we picked off nine passes (tied for 80th nationally). Kerby had five and the rest of the team had four. The year that came off the 10-year window was 2011 (when we had 10 INT's) so our ten-year total went from 90 to 89. We more or less had an average year for us. 90 the previous 10 seasons, 9 last season. I'm neither thrilled nor upset at the interception total last season. It's not the reason we're in the bottom 10%. And it was the first year for a new defensive scheme.

That snippet above mentioned Iowa (138) and Northwestern (137), and that's probably the best way to launch into the new numbers. Iowa had an astounding 25 interceptions last season (1st nationally). Northwestern had six (tied for 109th). So while the numbers from 2011 to 2020 had those two schools one interception apart, that's not the case anymore. In this new ten-year window, Iowa has 153 and Northwestern has 131.

Here's all of the teams. And please note that I've stuck with the original 120 teams (minus a few). Old Dominion is FBS now, but I haven't added Old Dominion's stats. And other schools like UConn used to be on here but UConn skipped the 2020 season so UConn dropped off this list.

I've written so many of these "don't really know what to say about these numbers" sections over the years that I'm not sure I should attempt to say anything. Maybe I'll just talk about the opportunity for Bret Bielema.

That's the next step for this yearly article. You have to really try to stay in the bottom 10% for more than a decade. You have to be so, so bad at something.

We are that bad at interceptions. Turner and Zook combined to make us dead last out of 120 teams. The Zook + Beckman numbers kept us dead last as we didn't move out of last place until 2015. The Beckman + Lovie numbers moved us up to 12th-from-last. And with Lovie putting together 0.88 interceptions per game over his five years, there's now an opportunity for Bret Bielema to push us even higher. Average an interception per game over the next four seasons and Illinois - yes, the University of Illinois Fighting Illini - could move to somewhere around 55th on this list.

Last season's nine interceptions = an average Illinois season the last 10 years. So maybe the next step is a 14 or 15 INT season that tells everyone things will be different from now on.

I wouldn't hate it if it happened this fall.

Missed July for this long time follower, but no matter your ingenuity is as always appreciated. When I first encountered “Robert@ALionEye”, thought you might be my since deceased friend Robert Auler writing under a pseudonym. You should take that as a great complement. If you never had the privilege of meeting Bob, ask Tate, and mention “Bob Auler” and “Dave Wilson” in the same breath.

So basically we need an INT a game to have a punchers chance at 15 INTs...

Another stat to track!

This. When you don’t score points and can’t stop the run, teams won’t have to take chances down the field

Good point. Also, I'm guessing Lovie's teams were at least top 10 in forced and recovered fumbles. Regardless, we shouldn't be so low.

Am hopeful that we now have the coaches to make this a reality with our DB's. How important has Phil Parker been for Iowa, 2 extra wins a year just from interceptions?