Continuing through some PMP suggestions and this one should be pretty easy. The one thing that moving to Champaign has changed the most about game day for me: the 5.5 hours previously reserved for driving before and after the game are now spent tailgating. What used to be 45 minute tailgate pop-byes can now be "set up at 8:30 and break down at 10" because I know I'll be home in seven minutes.

I guess I should show you the question first:

A guide for n00bs (as in "newbies" as in "new to this whole thing"). First, some general tailgating rules and then some Illinois-specific items. And it's difficult to stress this first one enough.

This is not a backyard BBQ. You're not at someone's birthday party at a shelter they rented back in February on the first day that shelters could be rented for the summer because AIDEN'S PARTY HAS TO BE AT SHELTER NUMBER THREE IN RAMSETT PARK. You don't feel any pressure in the air, no rules. This is a celebration of college football, outdoors, with food and drink. If you wander from this tailgate to that one, or if your frisbee floats into someone's potato salad, nobody cares. Seriously, nobody cares.

Now, obviously, decorum is a thing. I'm not suggesting you just head to some tailgate lots and walk around lifting the lids on random chafing dishes. Nor am I suggesting "wait until people aren't looking and then take beers out of coolers". This is not a free-for-all.

I'm saying that it's a Saturday free from the stress found at, say, a company picnic. This is not a neighborhood association meeting with rule changes on overnight street parking while everyone's eyes dart around the room wondering who is friend and who is foe. This is the opposite of all of that. When people say "we'll have a tailgate set up - you should swing by", THEY MEAN IT. You're gonna wake up Saturday morning and you're going to think "do they really want us to come by? wouldn't we be in the way?". They really want you to come by. You won't be in the way.

A tailgate Saturday is like a car show. And when you're walking around and you see the 1971 Chevelle in Classic Copper, you say to the guy "man, what a fantastic paint job". And he says "do you love Chevelles?" and you say "my dad had one when I was a kid" and 45 minutes later you're best friends.

That's a Saturday in Lot 31 (or 42 or 39 or wherever you set up). If you like the Illini flag that guy has flying over his tailgate, tell him. If you think that 15 foot-long beer trough is amazing, tell the woman adding more beers. "That guy has three flatscreens mounted on the back of the short bus he painted orange - I'm gonna go tell him how great it looks."

That's part of the whole deal. These people aren't putting a keg tap where the license plate used to be just because it's convenient. They're doing it for the "hell yeah, brother." Give it to them. They might just offer you a beer or three.

I get it. You met up with Greg and Sara last Friday at the local pizza joint and your kids were a bit of a nightmare. Everyone was bunched together in that booth, the food was late and the kids were hungry, your son knocked his drink into Greg's lap - I totally get why you said "I'm just not sure we can do stuff like that" once you put the kids to bed.

Well then do I have the thing for you: an all-day Saturday tailgate. There are frisbee and bean bag games to play. The kids can join one of 33 different pickup football games. There's fun stuff to do at the stadium (the band plays beforehand, the team walks in with much fanfare, etc). And most importantly, there's space.

The kids can eat, and then the kids can go run. The baby will get passed around to 16 different people. The teenagers can go wander around walking the tailgating aisles - just be back in one hour. When driving back to St. Louis for years, I swear I could hear the conversations in the cars all around me - "the kids loved it, I loved it - we have to do this more often."

Do this more often. And bring the kids.

1. This is Champaign. There will be wind.

I could go on, but you get the picture.

If you're meeting some friends, finding tailgates can be difficult. I always put my map app on the aerial photo and screenshot where my blue dot is located in the big field (and then text it to people), but that's still sometimes difficult. So it's always good to study the map and learn some of the ins and outs of how the Illinois tailgates work.

So get to know this map: 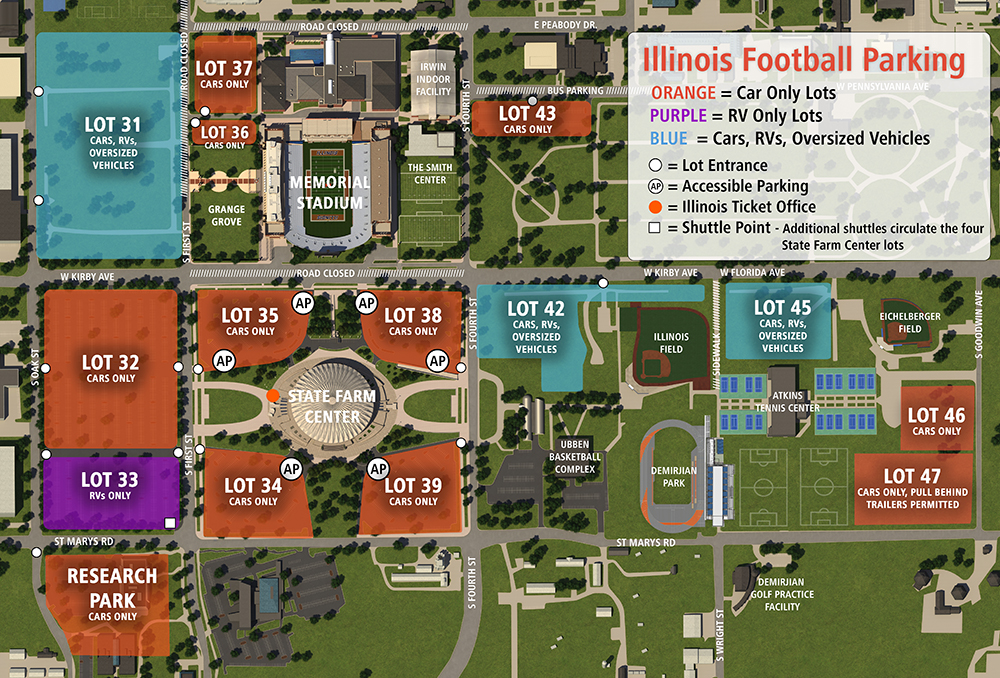 If you're visiting a tailgate, here's some things to know. In Lot 31 it's commonplace to list the approximate yardline for your tailgate. "Even with the north endzone" is a good way to find the correct aisle. Lot 32 is probably the most difficult place to find someone's tailgate because it's row after row after row of asphalt parking spaces. So you'd better hope the tailgate has a good identifying flag or something. Lots 34, 35, 38, and 39 are the State Farm Center lots but you're probably used to calling them "northeast" and "southwest" so make sure you have the map handy if someone tells you to meet them in lot 39.

42 and 45 might have shrunk a bit with the baseball and softball facilities that were built in the last year, but they're still great grass lots for tailgating. I know a few people who love 47 as well - it's the secret grass lot for big tailgates but you'd better leave for the game 20 minutes early because it's out there. And you don't have to worry about 36 or 37 because that's where the donors park before going to their suites and eating $90 cheese. (Just kidding. I see tailgates set up in 36 and 37.)

And then there's the Grange Grove. If you have a big tailgate with a lot of setup, the Grange Grove is rough because you have to carry it all in. But if you're just setting up a 10x10 with some chairs and one bags set, being right outside the stadium makes for a fantastic tailgate. We did this for 10 hours before and after the spring game.

But yes, learn that map. Visitors to Champaign (especially from places like Wisconsin or Minnesota) are always shocked at the massive tailgating lots in and around the stadium in Champaign. And as a result, it can get confusing when you're trying to find someone. Learn the numbers (and the general layout of the streets) and you should be fine.

3. We're all in this together.

No, not High School Musical. The best thing about tailgating Saturdays (for me) is that I get to see Illini Nation dressed to the nines. I usually leave the tailgate early because I need to get to the pressbox and set up. And that walk from the tailgate to the stadium is one of the best parts of my year. Orange after blue after orange after blue.

But when I walk the tailgate lots before the game, I'm filled with this overwhelming "there's tens of thousands of us" feeling. Yes, we have some of the smallest crowds in the Big Ten. But even seeing 40,000 people in and around the stadium before the game, almost all having been able to park within walking distance (two-thirds of Wisconsin's crowd takes shuttles to the stadium - can you imagine?), it's a beautiful sight. Warms my heart every single time.

Let's get a winning football program and see where this thing can go.

Cars only means no campers and no pickup trucks? What about SUVs?

It just means no RV's and no trailers. Those lots have parking spots and your vehicle needs to fit in one of the parking spots. Pickup trucks, SUV's, all of that falls under "cars".

Grange Grove is a nice added touch over the last few years. Its a good time, winning more home games will really add to the atmosphere!

Does it cost to park in these lots? If so, does it vary by lot?

Also, for asphalt car lots, is it considered kosher to take over an empty spot with your tailgate, or is that frowned upon?

If it is a numbered lot on the map Robert provided, then you have to pay. In my experience with parking in the paved lots, no one has ever seemed to police taking empty spots for a tailgate setup. However, it does get frustrating closer to game time when you have a parking pass and you are trying to find a spot to park, and the lot is full with many spots being taken by tailgate setups.

There are some permit only lots, some pay lots. I generally go with a guy that has a permit. IIRC, pay lots are $20 or $25.

Tailgating at college games has always been bigger and better than in the lots of NFL games.

From a space, proximity and surface standpoint, it is the best college football tailgating experience in the nation.