I don't know where to start. I'm going through my "CFB Stats" bookmark folder - the one I usually go through begrudgingly every Monday/Tuesday - and every single page I'm browsing gives me good news. These are the times I can get way too excited, so I'm trying to calm myself down, but... it's very difficult. I'll just do a buncha headings for all of these numbers.

ESPN's FPI has a full set of projections which are updated each week. I hadn't checked them yet today, but then this image showed up in my Twitter feed: 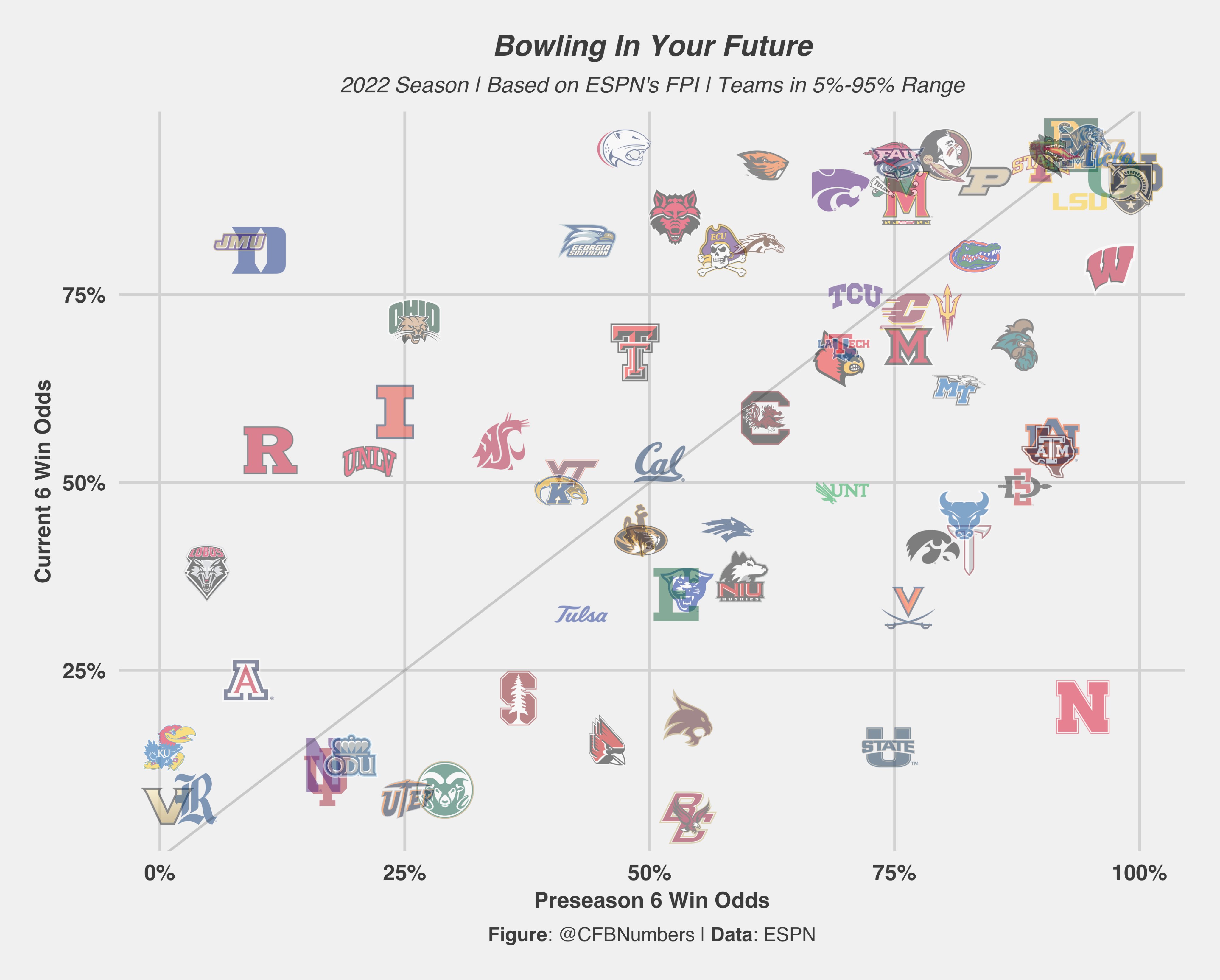 Put simply, the "I" in that spot means that Illinois had a 25% chance to be a bowl team based on preseason numbers and a 60% chance based on the results of the first few games. Want to get me to sit up in my chair? Show me a chart like that.

So I ran to the FPI page (can you run on the internet?) to see the exact numbers. Maybe the best way to do this is to list the Big Ten West. Here's what the FPI formula spits out for each team's bowl chances:

Yes, it's early. Their numbers are reacting to Iowa's offensive struggles and Wisconsin's loss to Washington State. But schedules are factored into this (Minnesota plays New Mexico State, Western Illinois, and Colorado as their three non-conference games and then they skip Ohio State and Michigan with their crossover games, thus the highest bowl chances while Wisconsin gets Michigan State, Ohio State, and surprising-so-far Maryland as their crossovers), so yes, maybe we do live in a world where Wisconsin has a 78% chance to bowl and Illinois has a 59% chance.

I need to stop looking at this because it's not healthy for me.

This is the Bill Connelly stat I've talked about for the past half-dozen years or so. He produces a stat called Postgame Win Expectancy (PGWE - the thing we discussed last week) for each game where... well, here's how he describes it:

I reference a measure called postgame win expectancy quite a bit. It takes all the key predictive stats that a given game produces (a lot of the stuff that gets fed into SP+), tosses them into the air and says, "With these stats, you could have expected to win this game X% of the time."

A quick recap in case you didn't read that article last week: Sometimes you win a game you had no business winning. Play that game 100 times with the same statistics and you're only going to win that game three times out of 100. You'd need the other team to fumble four times and lose all four fumbles (instead of the national average right around 50%), you'd need the other team's failed third down conversions to all happen in the redzone (I'm just giving a few examples here, but this one is basically "the opponent went 9-14 on third down conversions but all five failed conversions were in the redzone turning 35 points into 15"), and a bunch of other stuff like that.

A good example that nearly happened in the Virginia game: Pat Bryant fumbled at the one. Had Virginia picked that up and gone 99 yards for a defensive TD, that's basically a 14 point swing. Take 7 away from Illinois and add 7 to Virginia. Had this one been destined for a 27-14 score -- it wasn't, because we dominated other statistical categories -- but had it been a game like that, one play would flip the score from a 27-14 Illinois win to a 21-20 Virginia win. Just one single play.

Because it's football and things happen like that, he came up with PGWE. He then adds all of your PWGE percentages together to get your 2nd Order Wins. It's not a number that means anything - I'm not suggesting that the team with the best statistics should just be handed the World Series title next month - but it tells you who was fortunate and who was unlucky.

Second order wins through seven games last season: 1.3. We were 2-5 at the time, and probably a little lucky to be 2-5. We discussed those PGWE percentages last week. Purdue? 17% (we almost won a game that a team with our statistics would lose 83 out of 100 times). Maryland? 3% (nearly won a game we'd lose 97 out of 100 times). PGWE for Virginia and Wisconsin? 0.0%. So totally dominated statistically that no team ever wins a game with statistics that lopsided. Add them all up and we went into our eighth game last season with a 2nd Order Wins number of 1.3.

Obviously, strength of schedule isn't part of this. The formula is just looking at the individual games. Illinois beating Virginia with a 99.7% PGWE is a lot more impressive than Indiana beating an FCS school with a 99.2% PGWE. Georgia's 100% game over Oregon is probably 30 times more impressive than Minnesota's 100% game over Western Illinois. So this is not some stat where you can determine that one team is better than another. That would be like saying a team that went 6-2 in the Sun Belt is just as good as a team that went 6-2 in the SEC.

But it can tell you that some close games weren't really close. Purdue was a "close game" last year, but we got an interception in their endzone when they were about to take the lead and we grabbed another interception when the ball bounced off their tight end's hands and went straight to Tony Adams. That helped make a game that wouldn't usually be close -- we passed for exactly 100 yards on 27 attempts (!!) and put up less than 4 yards per play the entire game (a near deathblow in college football) -- a close game.

The Indiana game last week had some of that as well, but that was a close game the stats say should have been an Illini victory. A lot of the loss is on us (1st and goal at the 6 no points, throw an interception at the 5 - we broke the "yards need to equal points" golden rule), but when you look at the overall stats, it's a game Illinois wins 67.4% of the time.

Look at those, and then look back at our 100 and 99.7 (plus a 67.4 loss) against similar (if not better) opponents and you should feel really, really good.

I literally just made that up as I was typing the header. Welcome to this thing I thought of nine seconds ago called the IlliniBoard NERDstat Index. It's a thing where I take the NERDstat rankings I have bookmarked and combine them into one composite ranking. I know there are other composite rankings out there, but I don't have all of those NERDstat sites bookmarked so I don't know if I can trust them. These sites - I've followed these sites for a while and I trust them. The four rankings:

Here's the current Illini rankings for each:

Now let's take a look at the Big Ten West at the moment. The INI for each:

The movement is the most impressive part. Let me go compile the preseason averages for each and then compare that to the current ranking:

I feel like reorganizing those by movement. From preseason INI to the current INI:

The ILL INI is moving up!

You're the king of signoffs, and even for you this is top notch.

I get it, but how does Nebby continue to be a NERDstats darling, seemingly year after year?

Usually, teams with lots of close losses start winning some of those games. Plus, most of the stats include something that encompasses recruiting rankings, which have been very good for Nebby

Very good news. Thanks for putting it in perspective. Where you show up on a chart is important, but what direction you're moving is just as important. I'm happy for you Robert. You so deserve this opportunity to cover a relevant program! Soon two simultaneously relevant programs.

With that said, gotta admit Chattanooga has me mildly nervous that this is a major trap game and will be frustratingly closer than it should be.