I get it. He's great! He's built an amazing defense! You're worried about what happens when he leaves! But can we maybe stop talking about the Secretary Of Defense and start talking about the troops? Schwarzkopf came up with a great plan for Operation Desert Storm, but even he would credit the troops and their training, not the plan.

This one will be short and sweet. I have about 45 minutes here. So I can't do my normal "make sure you know what I'm saying" thing. But this one has been building since Thursday night, and I want to talk about it.

First off, know that your experience is not my own. You might read the headline here and say "who is talking about Ryan Walters?". Usually, when I do this, I'm talking about my Twitter mentions. You don't know you're being repetitive when you tweet @ me, but this is my experience on Twitter right now: 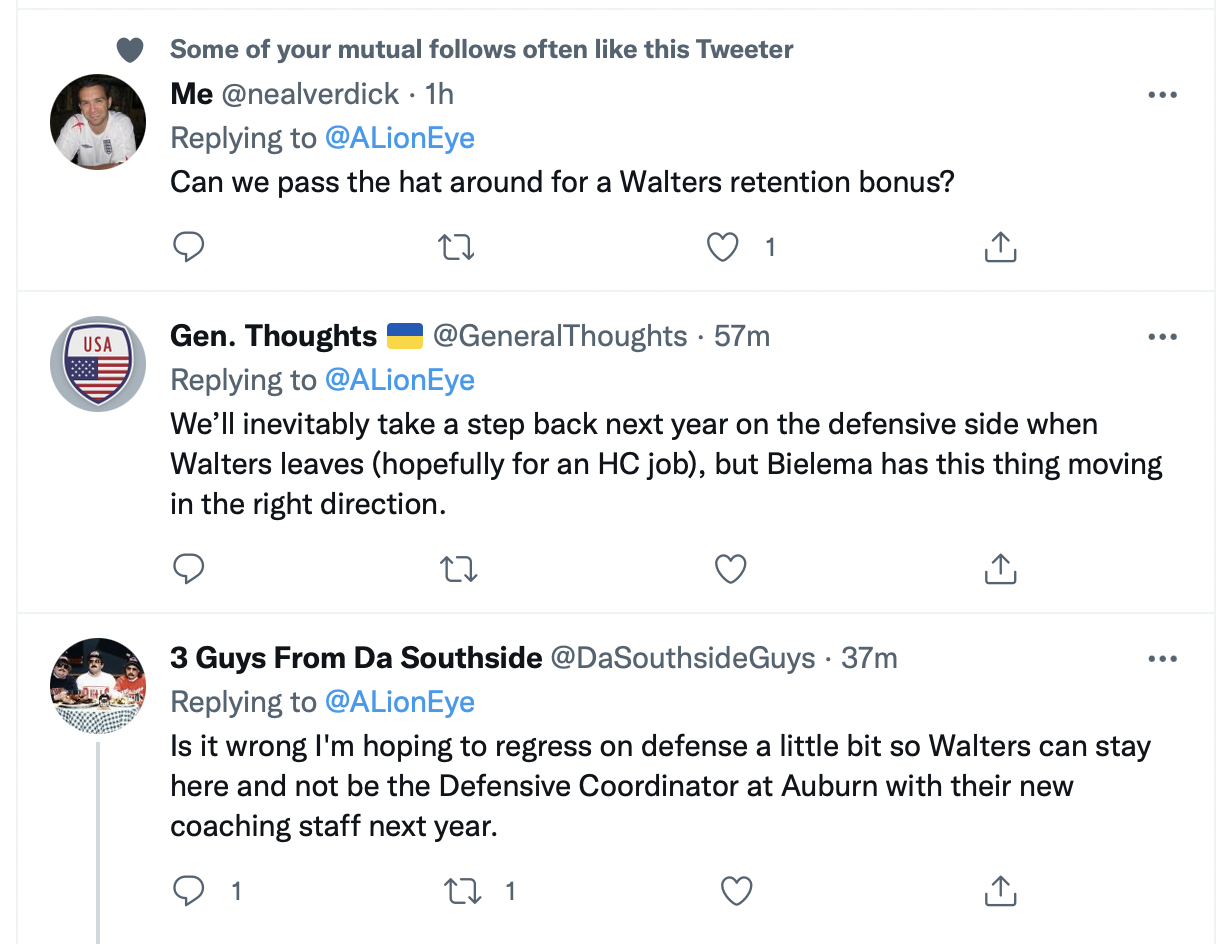 So our experiences are not the same. I'm full on "I GET IT, EVERYONE" while you're not even aware that this is going on. But the fanbase right now - especially Illini Twitter - has, in my view, gone off the Walters deep end.

(And, again, that part I get. He's awesome! He won't be here forever because he's destined for great things! We're lucky to have him! But even he has probably reached "I GET IT, EVERYONE" status.)

Let me just make a list. That's always the best way to keep myself to 45 minutes.

1. If you sat down with him right now, I guarantee he would tell you "it's these players, not me."

Yes, that's something every coach feels like he has to say. But I've spoken with him enough to know this to be true: he wants the focus on these players. It's possible he inherited 7-8 NFL defenders, and he's reaping the benefits of their outstanding play right now.

Sure, that's the humble view and you hear him say that and do the giant fake wink while saying "SURRREEEE it's all on the players", but since the beginning of time there have been great coordinators with awful defenses because they just didn't have the talent. He has the talent. And that's the main thing making this defense great right now.

This is not to say that it's 100% players and 0% scheme. I'm simply saying that my mentions are 98% Walters and 2% players. I believe we should be talking about the players more than the defensive coordinator.

3. Bret Bielema is the head coach and Terrance Jamison is the DL coach and Kevin Kane is the OLB coach and Andy Buh is the linebacker coach and Aaron Henry is the CB coach.

I'll say it again. Walters is awesome. The defensive improvement from 2020 to 2022 is incredible. But he's not the ~only~ reason this defense has been great.

There's also a head coach who seems to know what he's doing in building a Big Ten program. And there's an associate head coach who coaches the outside linebackers and has a big say in the defensive game-planning. The DL coach, the LB coach, and the CB coach are all part of that as well.

Let me say that again because you were already formulating your response for the comments and you missed it.

On the "if he leaves we're in trouble" scale, in my book, it goes players, then coaches. Great players are harder to replace than great coaches. People do not think this is the case because of recruiting - when you recruit well for your scheme (like Wisconsin or Iowa), you have replacement players ready to go and there's rarely a dropoff - but as an Illini fan, I can tell you that the same defensive scheme can look overwhelmingly different one year to the next simply because key players left.

Yes, you have to have it all. Great players running a great scheme called by someone who knows what he's doing. It's very obvious that Ryan Walters knows what he's doing. But the first two things are being ignored (at least in my mentions). This is a solid scheme (tweaked by Walters and all of the defensive assistants) with some incredible players. In my opinion we should be talking about them more than Walters.

Time is up and my wife is waiting for me so the other 13 paragraphs in my head will go unwritten. Re-reading this, maybe I should change the title to "stop talking ONLY about Ryan Walters."

No time to change it. Gotta go.

Ignoring anything else that Lovie did, it seems that he did recruit some talent to the U of I.

Just couldn't seem to develop it. Kerby was a wide receiver under the Lovie regime, wasn't he?

Nope. He played mostly on defense. At one point, when the WR room was decimated by injuries, he moved over there for a short while.

Splitting hairs…but I think he could identify and develop defensive talent, just was incredibly stubborn schematically and unwilling to adjust.

Well said, Robert. I don't want Walters to leave. That's a given. But you need the right players, too. The greatest college coach of all time couldn't lift the '97 Illinois roster to a Big Ten title. And great rosters can be dragged down by inferior coaching.

It's a process. Kudos to Coach Bielema for getting good assistants and identifying players who can succeed within the scheme. And kudos to the players for buying in and making the plays. It's obvious the players believe in the coaches and each other. Let's hope the fans reciprocate by believing in them.

Having a clear head, a workable plan, the ability to adapt when necessary and players to achieve it, are the reason for the real improvement we see this year.

Sydney Brown is also a potential NFL player on the defense

I still think it’s mostly Ryan Walters. He is making some of these guys into NFL players by putting them into position to succeed.

Lovie Smith did have a good eye for talent but no Illinois defense looks like this without superior coaching.

I think coaching matters more than talent in college football. Some schemes just work better than others and some guys can teach and motivate while others fail.

Each level down from NFL to college to high school the coaching matters more.

Appreciate the article but I will respectfully disagree.

I would definitely change the title. “Stop talking about Ryan Walters” made me do a triple take. He has earned recognition. The last staff had a lot of those same players. Plus Hobbs and Philips. And those defenses were some of the worst in the country.

Yes there are other coaches on the defensive staff who deserve credit. I’ll be fine with Kane as DC when Walters is a HC somewhere.

But as one of the 17, trying to get the casuals interested in this team, I will not stop talking about Ryan Walters. (Or the defensive staff and players)

Stop talking ONLY about Ryan Walters AND how he’s definitely gone next year. Enjoy how good this defense and coaching staff is. If we go 5-7, how many major programs are beating down the door for a coordinator at a 5-7 school? If we go 8-4 (please Lord), enjoy it. Don’t worry about what we’ll lose.

I think Avery can play on Sundays as well.

And i do NOT envy your mentions

Illini fans have been conditioned to be negative. Easy to get caught up in it all...thankfully I don't have the mentions you do. Agreed with what you're saying here.

I've come to believe that building a successful college program is like 100% hiring the right coach for the right spot. Sure, it requires having an administration on board to do what it takes to win--but after that it's all coaching. Get Whitman on board and he hire the right coach (Underwood) which equals a steady climb to excellence. Hire the wrong coach (Lovie) and the bottom falls out. Even within staffs it matter--do we go bowling last year if Luney is the OC? Do we win 5 games last year if Lovie is the DC?

I do agree that players matter and should get credit...but college is a coaches game.