Obviously there's a lot that goes into all of this. Those analytics don't tell you that every two point jumper is bad. There are good twos and bad twos. There's no coach telling his team "only take shots from behind the line or right around the rim." Defender falls down? Don't charge toward the rim and attract more defenders. Take the open 13-footer.

My point is that basketball changed a lot. The reason Coleman Hawkins might play in the NBA and Kofi will not is because Coleman Hawkins can shoot the three and Kofi cannot. Skinny big men with range are more valuable than Shaq-like big men in the paint. It's just the current state of basketball. 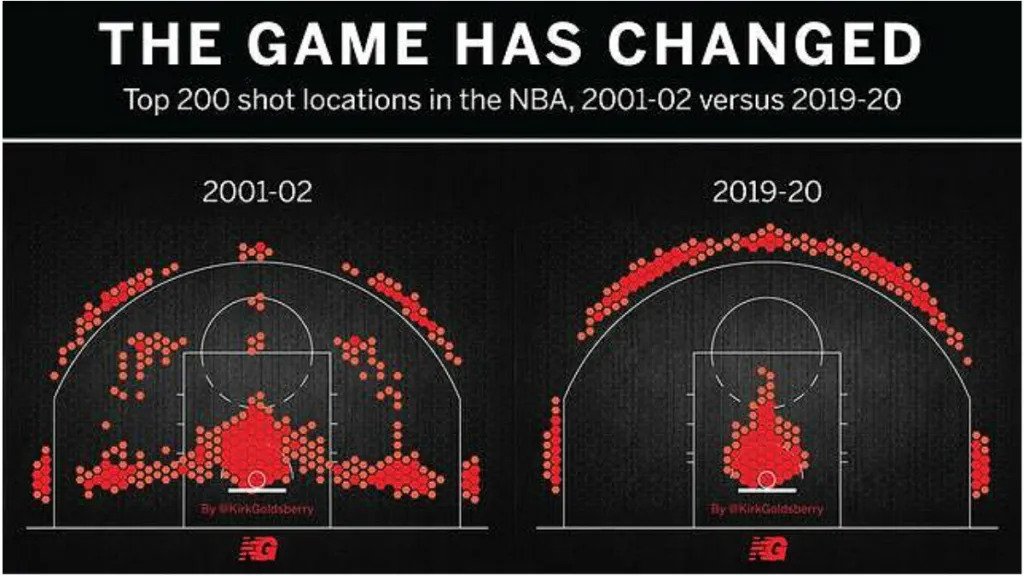 That's what I'm talking about here. If you hit 45% of your long twos and 37% of your threes, stop taking long twos and just shoot threes because you're going to score a lot more points. Shoot only high percentage shots near the rim and three pointers beyond the arc.

Brad Underwood mostly follows this thinking. It's not as strict as what some NBA teams go for, but he believes in three pointers and shots at the rim. We've discussed this before.

Chris Holtmann, uh, does not. I started tracking this on Twitter during the game and once the game was over I had a fairly stunning stat prepared for this article. Let's talk about it.

The official stat feed in the State Farm Center lists all of the shots taken. Those shots are tracked based on what kind of shot. Anything beyond the arc, obviously, is a Three Pointer. Anything inside the arc but not right at the rim is listed as a Jumper. Shots right at the rim are listed two different ways: Layup and Dunk. So a little floater in the line is going to be listed as a Jumper. That chart only has four different labels:

Here's the full shot chart from tonight. An X is a miss, a check mark is a make. 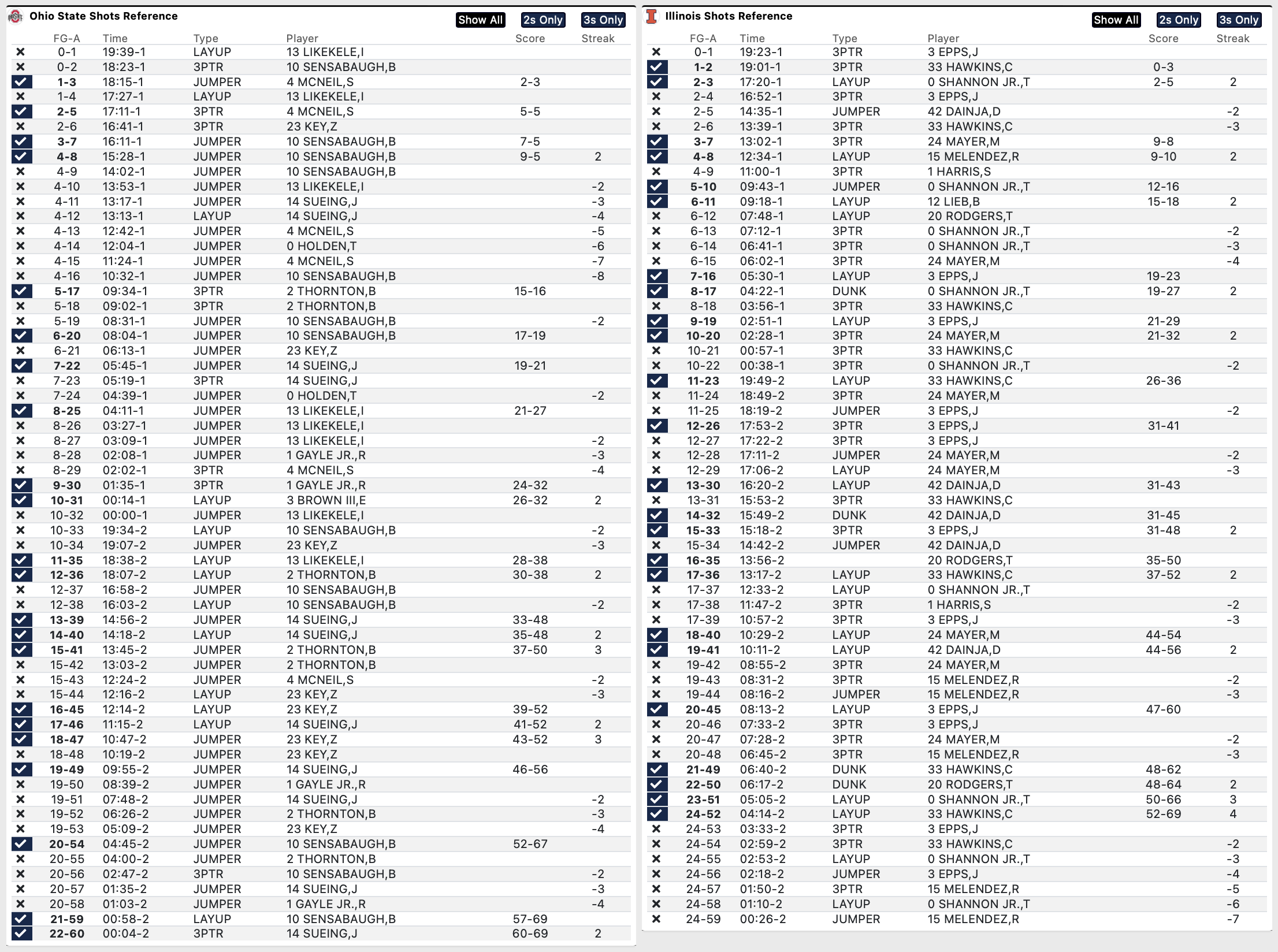 Number of times the word "JUMPER" appears in the Ohio State column: 37 times.

Number of times the word "JUMPER" appears in the Illinois column: 9.

The two teams were tied at 59 shots apiece before Ohio State took that final three to make it 60 shots on the night. So let me just chart those shots real quick:

(The one shot that isn't labeled there on the chart was Ty Rodgers spinning shot in the lane. It was almost a hook shot? Wonder if the stat crew tried to find the Kareem SKYHOOK button. I put it down as a "jumper" since it wasn't a layup or a dunk.)

Now let's add makes and misses to that.

What were they doing instead of getting to the rim? Shooting 37 jumpers (and making only 29.7% of them).

Again, this isn't "what was Holtmann thinking doesn't he know basketball has changed?" Ohio State expects Sensabaugh and Sueing to make a ton of those jumpers (certainly way more than 29.7%). With a normal shooting night (and us shooting that poorly from three), this game is very close.

But the difference was in how we overcame shooting 17.9% from three. We had 34 points at the rim plus 16 free throws. We got to the rack, they didn't, we got dunks and layups, they shot jumper after jumper, we win.

+ At the under-16 timeout (which didn't come until 14:42 in the second half) I looked through the minutes played and saw that Ty Rodgers only had 4 minutes played in the first 26. I was hoping this could be a game where he could build on what he did at Nebraska but at that point he had 4 total minutes, one (excruciating) missed layup, 2 rebounds, and 2 fouls.

And then he played 11 of the final 14 minutes and was maybe our best player? In those 11 minutes...

I know that we're in the Transfer Portal era so no one wants to say "by his senior year..." anymore. But you can already see what he could be in the next few years. If we let him, he could redefine Glue Guy in Champaign.

And he could also win Big Ten Defensive Player of the Year once he learns to defend without fouling.

+ But seriously, 5-28 from three is extremely concerning. Let me go look up three point percentage in conference games only on KenPom real quick.

Last year? 35.1% in Big Ten play. The year before that? 36.4% in Big Ten play. 31.0% is a big anchor hanging around our necks the rest of conference play. Ohio State is shooting 41.7% from three during Big Ten play and Indiana is at nearly 40%. We really need to bump that up if we want to make a run. There's a lot of rough road games coming up.

+ Who knew we'd lead the Big Ten in block percentage? I guess it makes sense given that we tried to become the lengthiest long team in length history this offseason. Long arms = blocks. But still, I didn't expect to get this many blocks the year after Kofi left. Let me go back to KenPom and sort those stats as well.

16th nationally in block percentage (14.8). When sorting by conference games only it actually goes up to 14.9 which leads the Big Ten. Good stuff.

OK, I'm falling asleep so that's all I have. I will now go to bed and dream of layups and dunks.

I was really impressed with our D tonight. Played smart, played hard. Not to say that they didn't, but that 29.7% was certainly impacted by our intensity. Wide open threes or threes where the shooter gets the ball in rhythm are fine (although to your point we sure need to make a lot more of those), but those step backs that are contested just kill me. Less settling pls!

I wonder if there's a stat that tracks "good threes" versus "bad threes" by the way. Would love to see how our three-point percentage is impacted with that filter.

Yes! That’s the key to this team.

I think you should pass this article on to Robbie Hummel.

I think the best part about our increase in blocks per game is the amount that are leading to opponent turnovers. Last year kofi (and Omar Payne) could block but most of the time the ball would end up 4 rows in. It got the crowd loud but if they scored on the inbounds it was all for nothing. This year our blocks are more often being scooped up by help defender.

Imagine what might have happened in the IU game if we had made say, 5 of those missed layups and 5 more FT's? Doesn't mean it ends in a tie but considering this and the timing of when layups were blown and FTs missed also had a huge impact (deathblow to momentum). IU played great, maybe as well as they can but a few made layups and FTs.....

Yep. That game was an anomaly. A blip. A team with tired legs. What you have seen in 5/6 games is who this team is. No one is whipping Nebraska at home. This team is legit.

Northwestern being this competent is mind boggling. I really thought this was going to be Collins last year with a 12th place finish.

I think Holtmann is justified in believing in long 2s, because Brice Sensabaugh is an anomaly when it comes to 2 point jumpers. Kind of like Ayo was in college (but even more drastic in Sensabaugh's case), or Demar DeRozan is in the NBA. They are so good at it, that it breaks the analytics. His true shooting percentage of over 60% is elite for someone with his volume and shot profile (most power conference players over 60% are bigs like Dain Dainja). I'm sure he and they wished they had more dunks and lay ups, but the lack of those AND the lack of efficiency on their jumpers show a strong defensive gameplan and execution by the team. Because earlier in the year there were teams who were abusing us on 2 point jumpers, especially against Dain's drop coverage, which has been pushed up higher as the season goes on because of it.